Encore Melaka is a relatively new theater in Malacca (Malaysia) and it’s capable of hosting up to 2,000 people in one show.

It is also the 10th Impression series and the only one outside of China. Impression is well known as it was established by famous directors Zhang Yimou, Fan Yue and Wang Chaoge. Many may have watched the one in Guilin (China). However, Encore Melaka focuses on the history of Melaka and more on the Baba Nyonya, so the story is definitely different.

The show in Encore Melaka is slightly over an hour and is usually held twice a day, in the evening and at night.

The theater is definitely different as it’s a revolving one, i.e. it can move 360 degrees. You’ll notice gradual movements in the show as they showcase a visually stunning performance.

Encore Melaka is situated at Impression City, which is mostly still under development, and this show is basically the highlight of the place.

It’s part of the reclaimed land, so some of you may be unfamiliar with it. It’s directly opposite the new posh housing area called the Straits Courtyard.

The easiest way to go there is to probably just use a navigation app like Waze and you should see signs pointing to the place when you’re near. 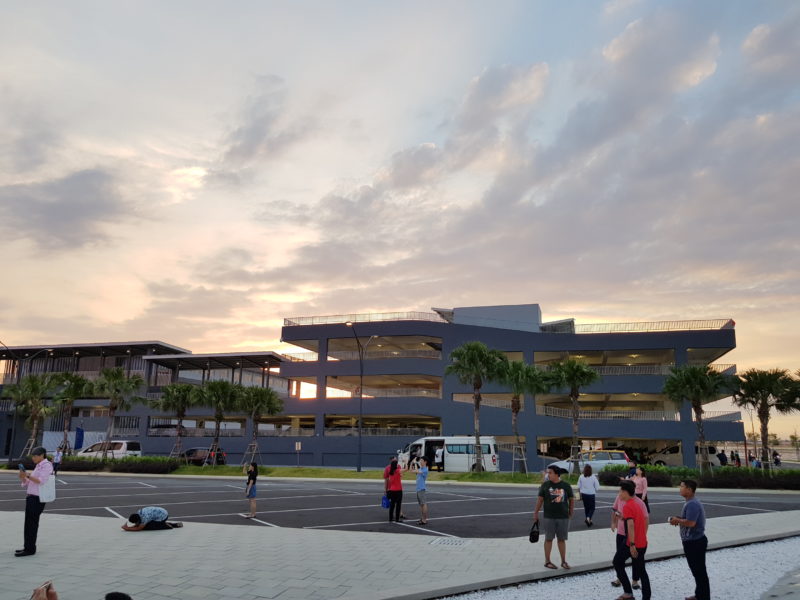 They have a free multi-level parking there, so don’t worry about parking at all. 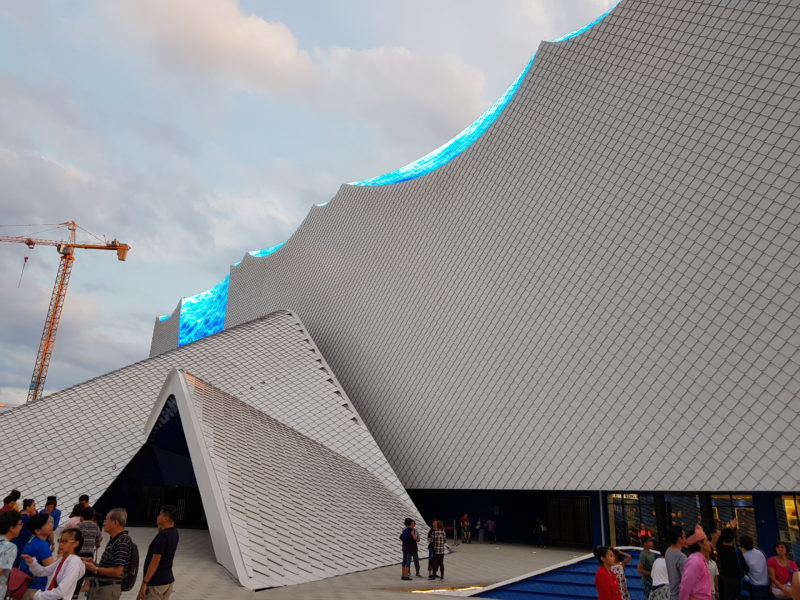 The building doesn’t look too impressive from far, but as you get closer, you can see individual tiles that line the entire building. 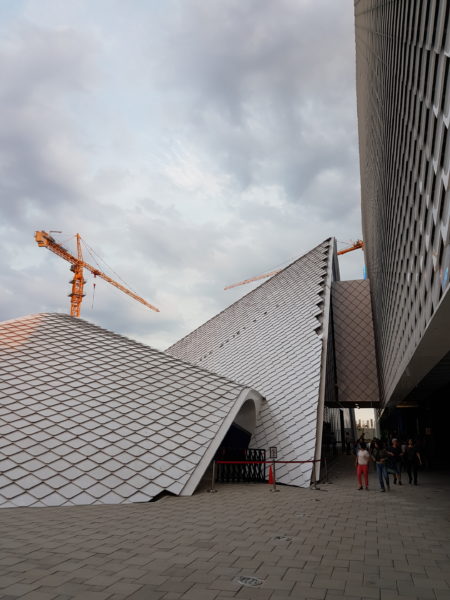 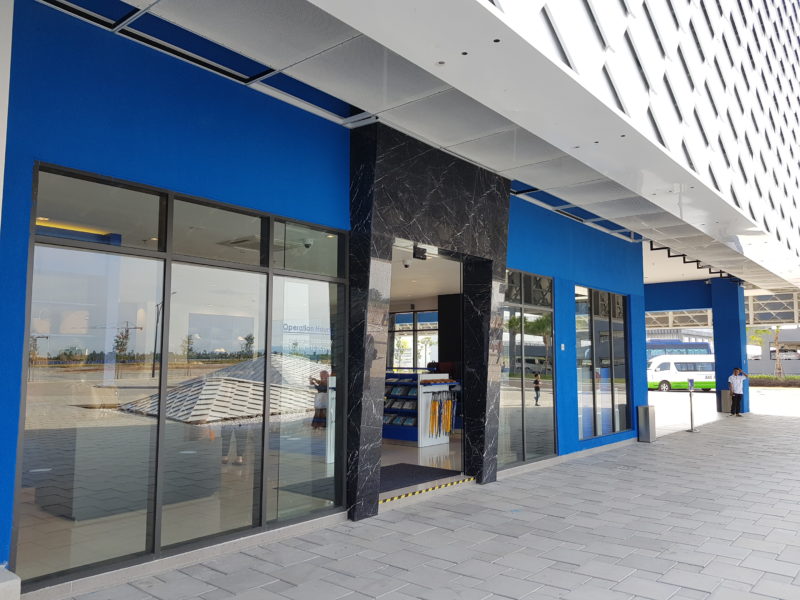 They have a souvenir store that sells mainly Encore Melaka merchandise and some local stuff like coffee and candy.

The prices are definitely higher than usual.

Before we check out the photos of the show, do note that they have an incredibly huge toilet outside the theater. Please use it before the show, as the one in the theater is not recommended.

Going into the theater 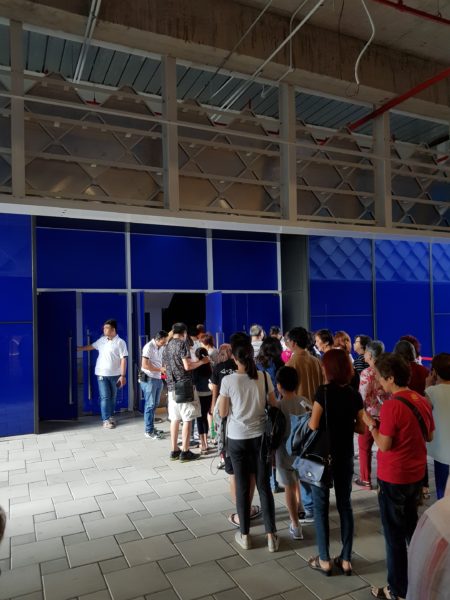 This is the queue going into the theater. 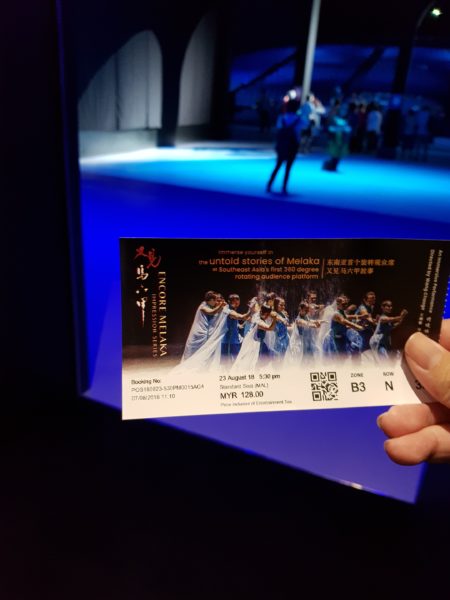 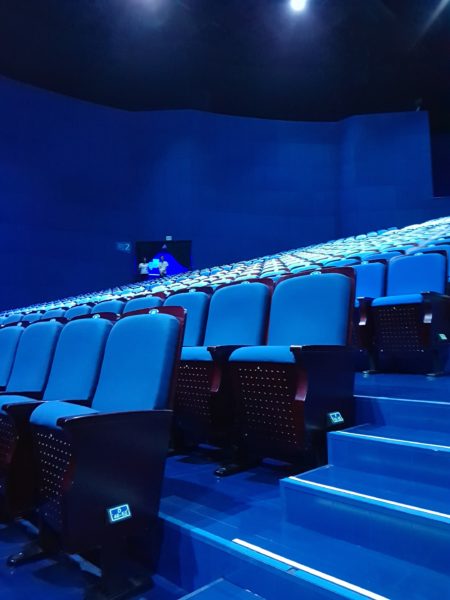 This is how the seats look like. They have toilets on both sides inside the theater.

However, it’s a long walk that involves a lot of stairs and it gets tiring especially if you’re a senior citizen. It’s best to use the loo before you enter the theater.

The entire seating area is revolving. I don’t think the stage was the one moving, but rather us. The technology involved in this show is quite impressive to say the least.

They even have different screen layers that creates different effects.

My favorite part of the show was at the beginning, when they started playing the drums, but it was one of the only parts I didn’t take a photo. 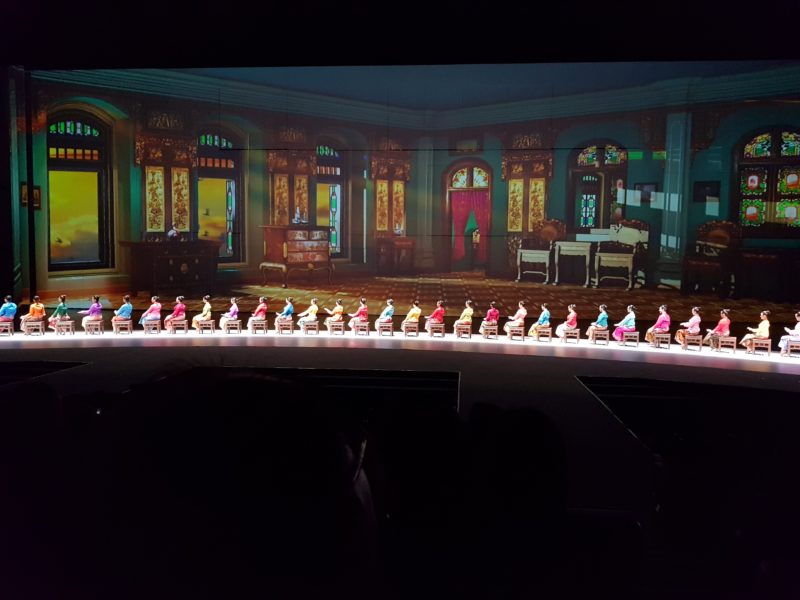 We also had very colorful performances like this one, which was sort of a Nyonya dance. 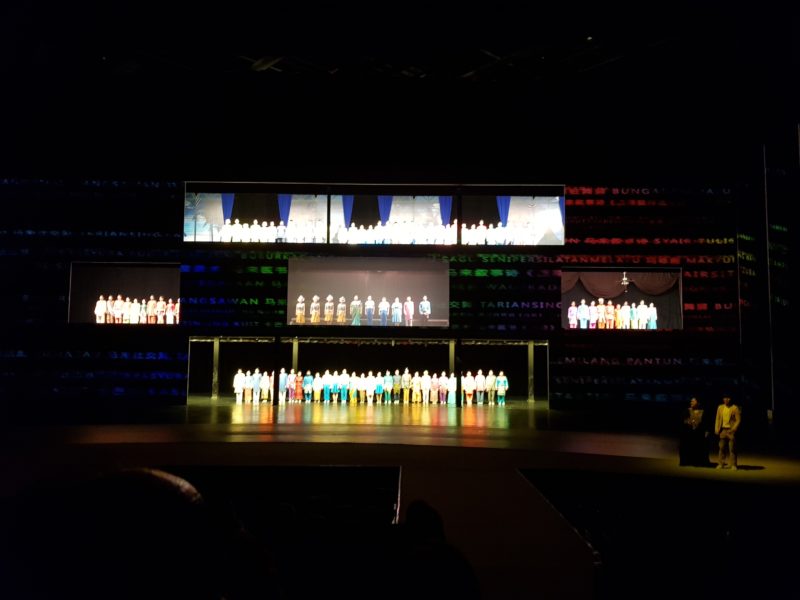 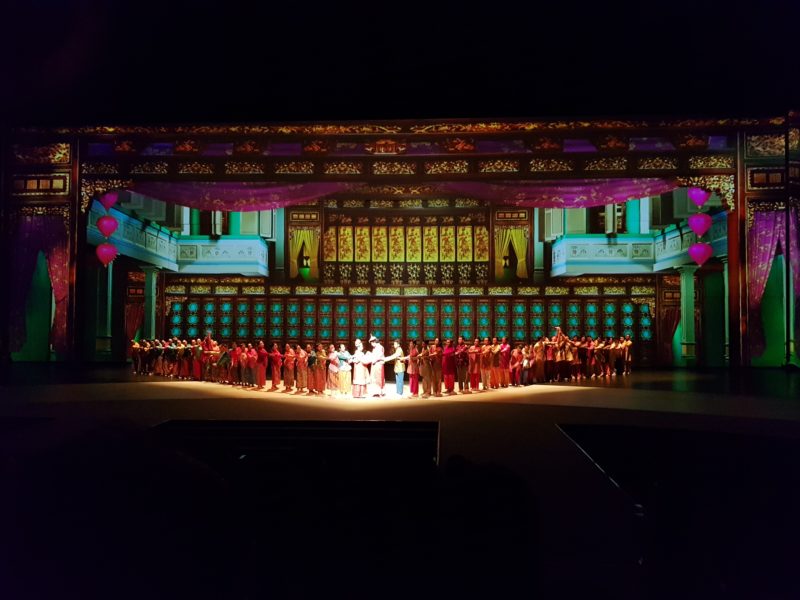 The show is sort of like divided into different segments and totally different stories. This one above was a Baba Nyonya wedding kinda performance. 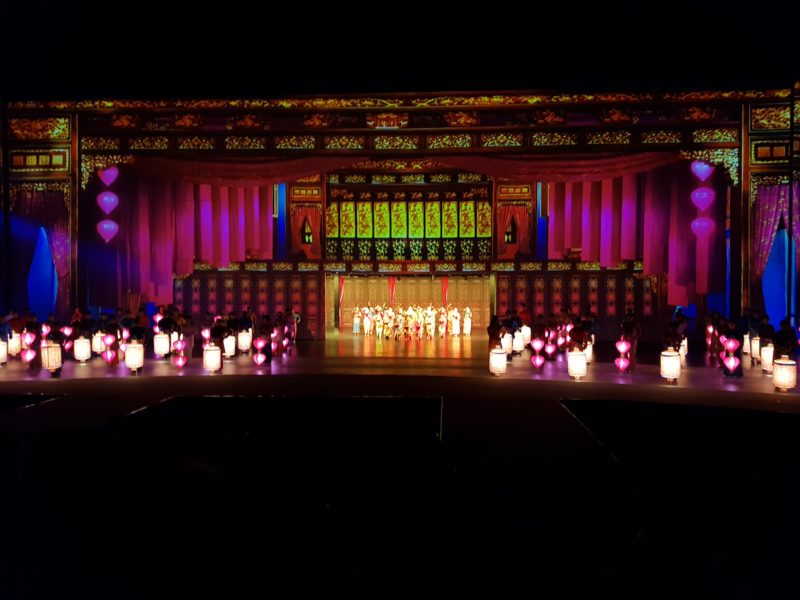 During this part of the show, they even handed the audience coconut candy, which is also available in their souvenir store.

Another of my favorite part was the play of water and lights as you can see below. 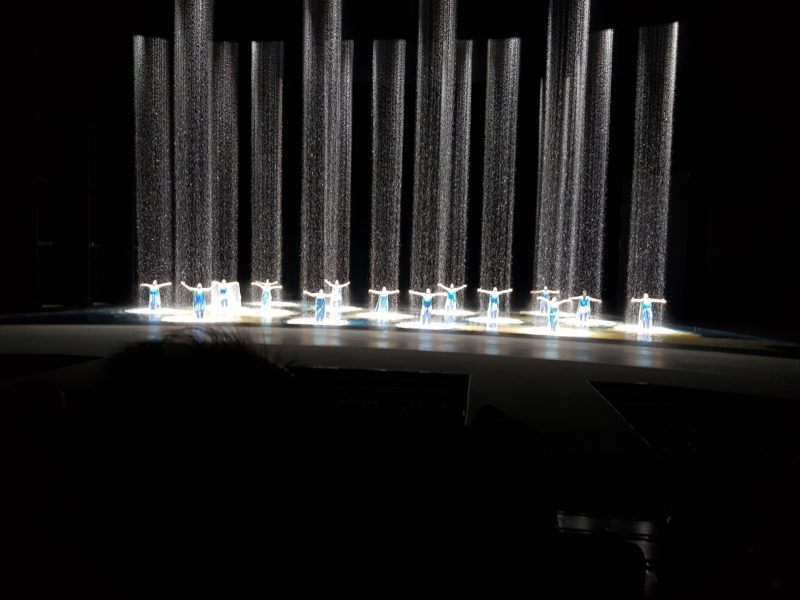 If there’s one thing I really liked about this show, it had to be the visually stunning experience. 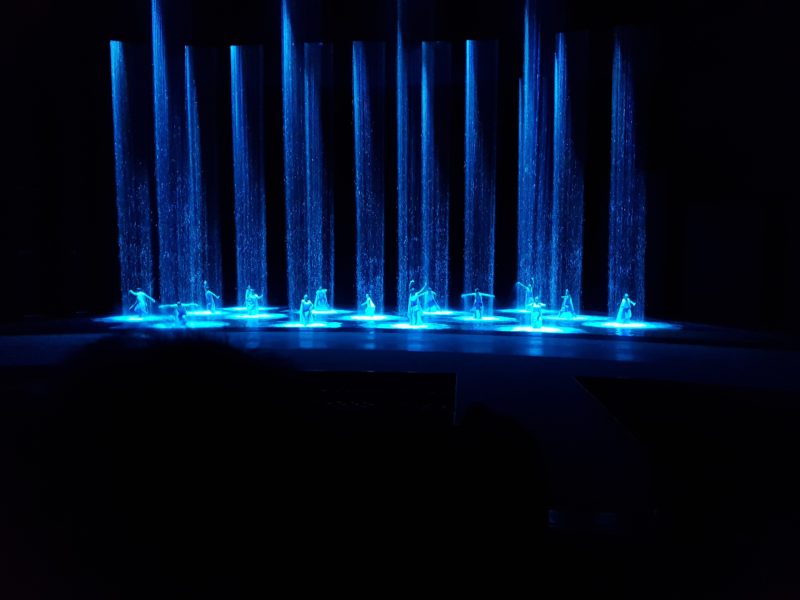 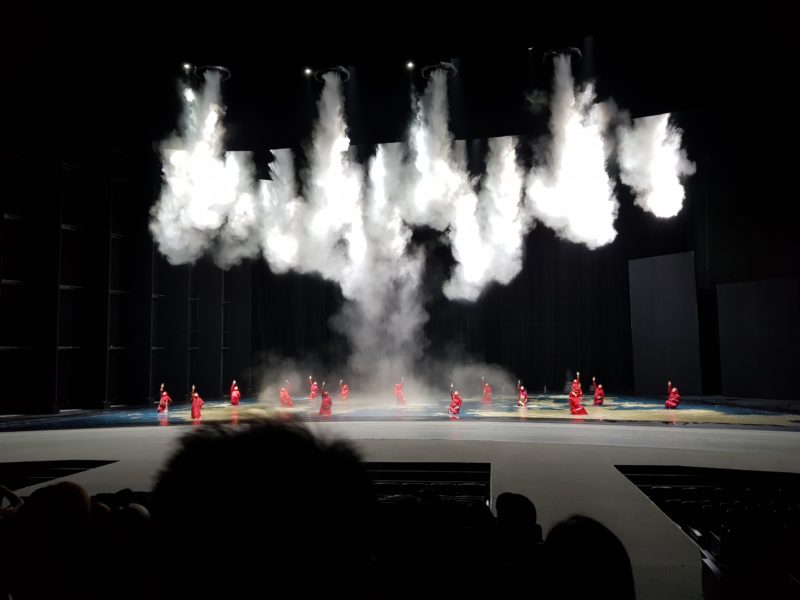 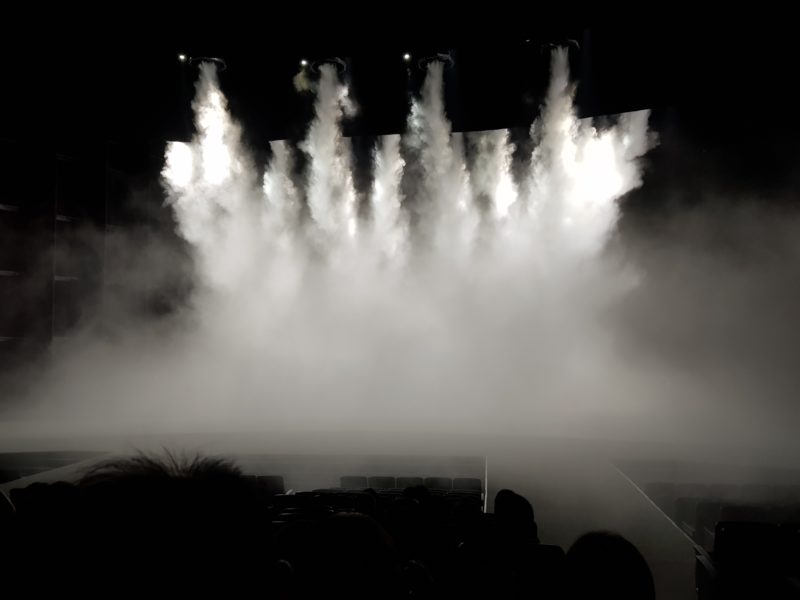 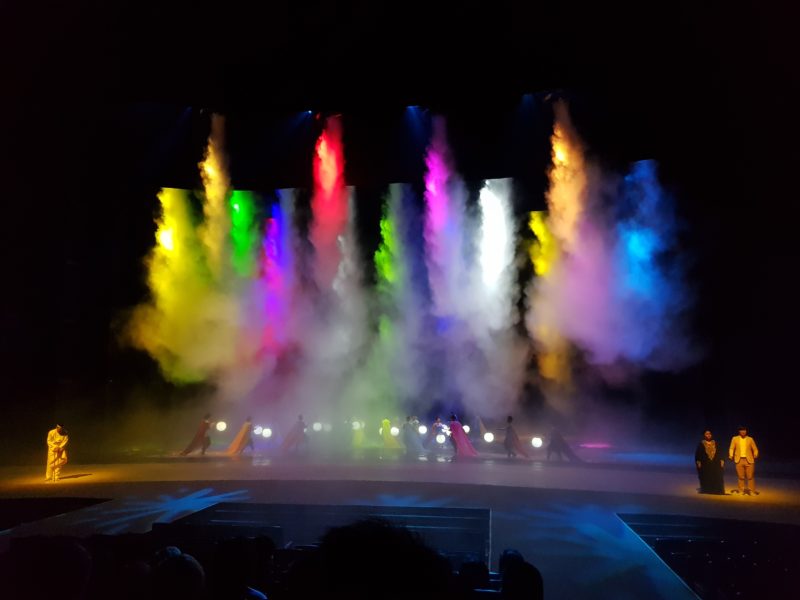 The combination of colors from the lights and water was really impressive. At one point it gets a little misty or foggy as it reaches the audience, but I kinda liked it. 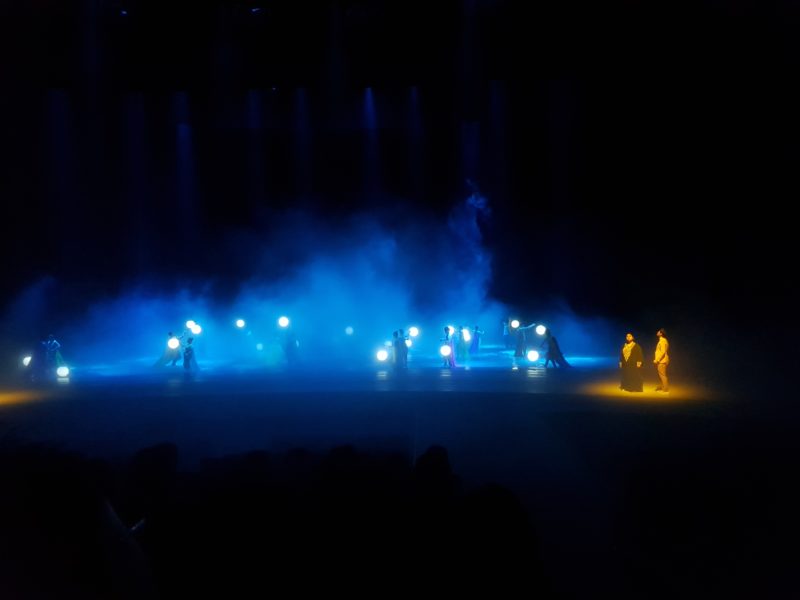 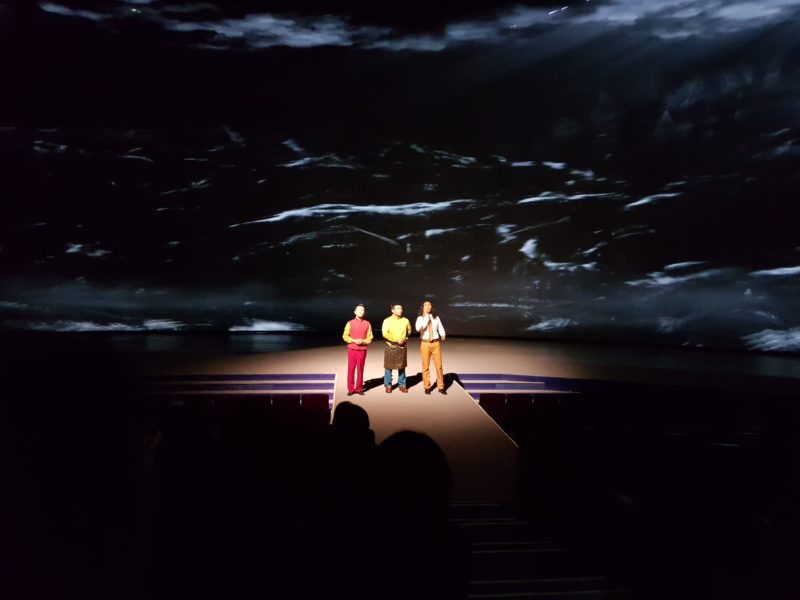 Despite the good parts of the show, there are also some things I didn’t really like.

The beginning was good and moved smoothly, but there was no real main character, as they are like different segments / time frames in the show.

We started off with Cheng Ho in the 1400’s but the bulk of it was probably the 1900’s and one part on the six mothers felt a little long. The message from the scene was a little too abstract.

Another thing many were not happy about was the screen. If you’re seated close to the screen, you can’t really see the words as they’re too large up-close.

Maybe it’s better to book a seat somewhere in the middle where you have quite a distance from the screen. However, if you sit closer, you can see the actors clearer.

It’s sort of a give and take situation. 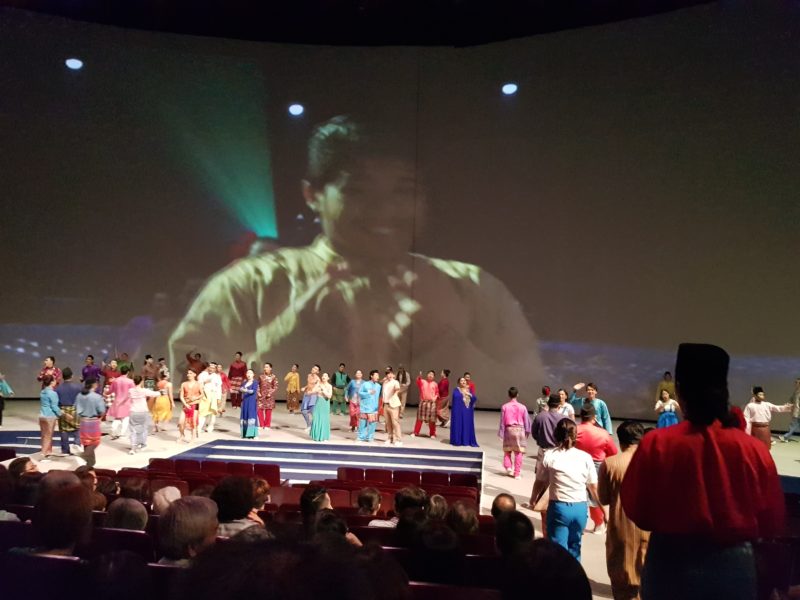 In the ending scene, they film members of the audience and you may see yourself on the large screen. 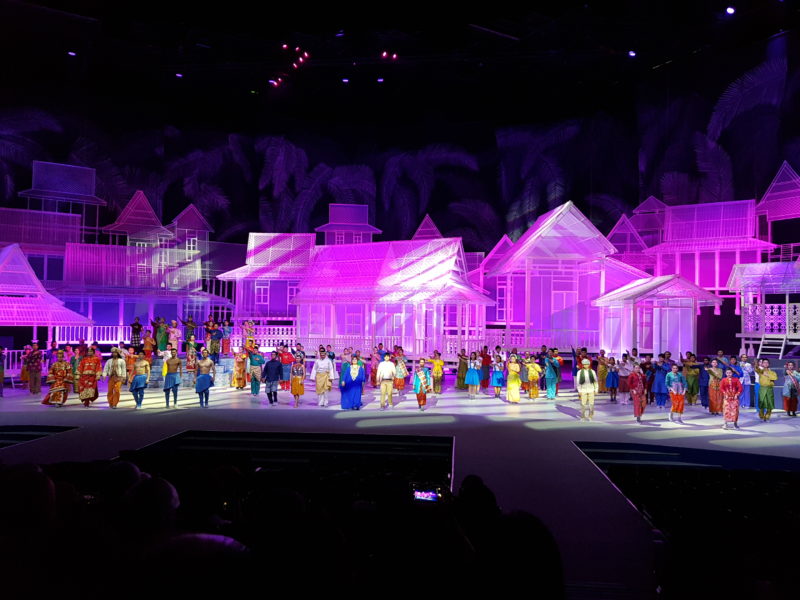 It’s where you wave goodbye. Like the other parts, it’s visually impressive. The photos only represent some parts and not most parts of the show.

I’ve never watched any other Impression series yet, but I heard from some that the ones in China are much better.

Then again, I can’t judge on that. If you’re new to the Impression series like I am, you should definitely give this a try.

It was a really unique experience and for the most part I enjoyed the show. Most parts of the show will have English, Bahasa Melayu and Chinese dialogues. 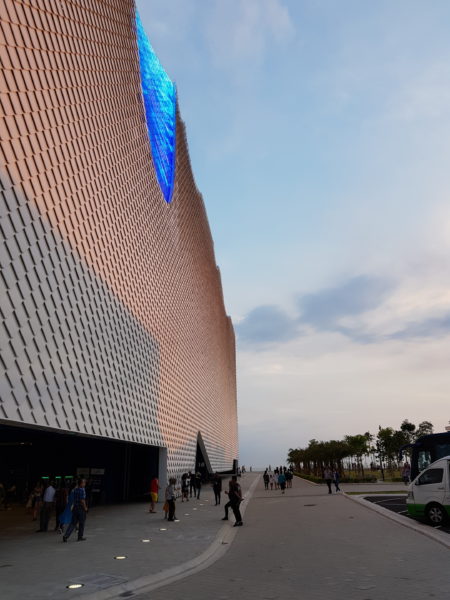 It’s so close to the sea and you can actually take good photos there at the back of the building. You’ll notice many heading there. 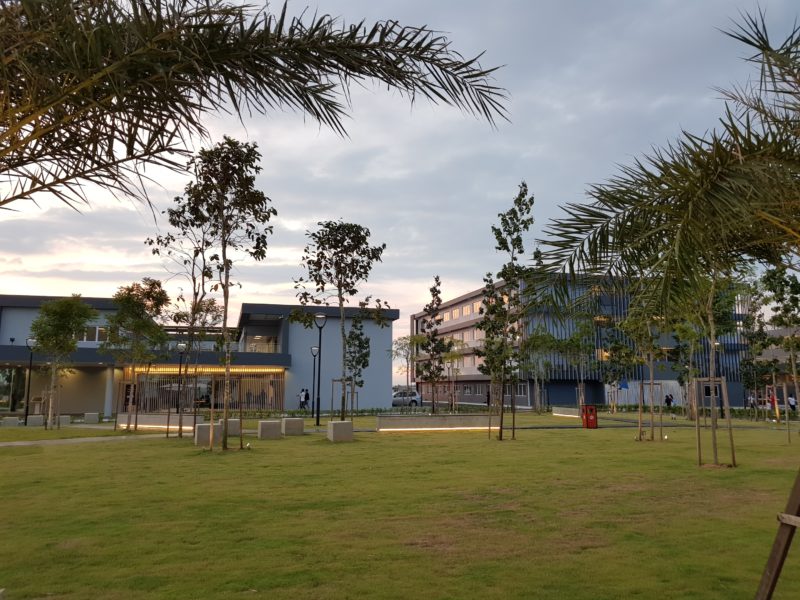 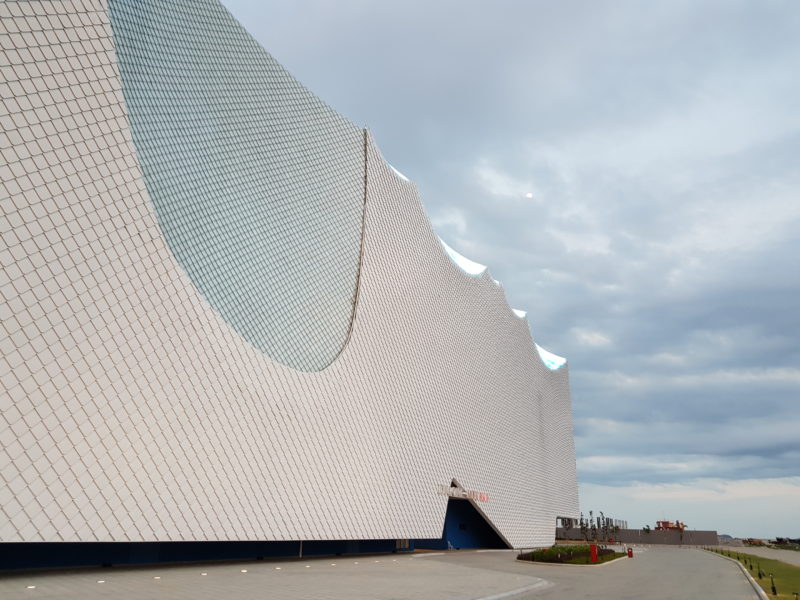 This is the back of the building. 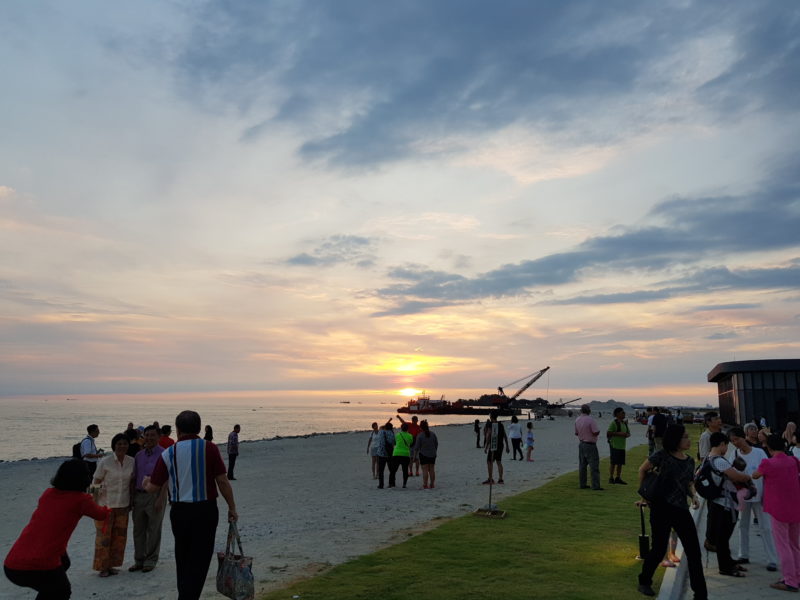 As we watched the evening show, it was just nice for a sunset view. It’s sort of like a mini beach here. 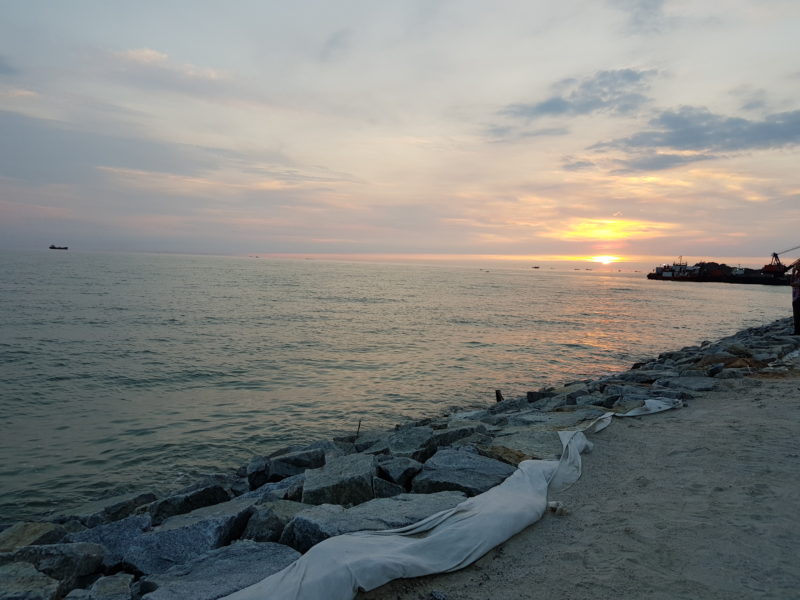 Encore Melaka (Impression series) is a pretty impressive show that utilizes high-tech tools and a big cast to showcase the history and culture of Malacca.

If you happen to be in Malacca, do check it out!

Voyager Of The Seas (Royal Caribbean) Review – Singapore To Phuket

What To Do In Malacca