Season 2 of Netflix’s Kingdom has finally been released a few days ago and we’re already wanting more.

This season comprises of six episodes, all slightly shorter than an hour.

The ending of season 2 also leads to the high possibility of a season 3 for this unique Korean zombie / period drama.

Episode six picks up from episode five where the court lady caused another outbreak of zombies within the capital. This resulted in Crown Prince Lee Chang and the rest of them having to deal with the undead.

They’ve killed a lot of zombies but they’re now outnumbered and protected by just a wooden gate with some men.

Death of the queen

In the next scene, Seo-bi (the physician), the queen and the guards are all seen trapped inside the main hall.

Zombies finally broke through the door and walls, and massacred all the guards. The queen was also bitten to death while she was holding the baby.

Seo-bi used fire to fend off the zombies and managed to pick up the baby.

She escapes the area by covering herself with a burning cloth, to push zombies away.

Seo-bi finally hides away in another room and barricaded the door.

The plan to lure the zombies away

In the next scene, Prince Chang and the rest head to the rooftop. They cut their palms to get some blood dripping.

It is used to lure the zombies toward them while they go towards the garden surrounded by frozen water.

While running on rooftops, some fell and died, and the zombies managed to climb up the roof.

For those who’re still alive, they headed to the middle of the garden and prepared for the undead to arrive.

The plan is to use their rifles to shoot at the frozen water. This will result in the zombies all falling to the water which they’re afraid of.

Prince Chang, Yeong-shin and the rest were all bitten while they tried to break the ice as they were clearly outnumbered. The undead queen also came and attacked the men.

The prince continued to try to break the ice using the rifle and his bare hand. When one of the bulky zombies headed towards him, he managed to do a wrestling move and slammed the zombie onto the weak point and the ice finally crumbled.

This resulted in all of them falling into the freezing water. While inside, the worms came out of their bodies and they survived. Only the four of them came out alive.

After handling the outbreak, most of the higher officials wanted the baby dead as he would directly challenge Prince Chang’s right to the crown, assuming the baby was really a descendant. Furthermore, the baby was already bitten a few times although he was soaked in water to remove the worms.

The scene ends with the prince swinging his sword.

In the next scene, there’s a ritual performed involving the king, and the young king has a scar on his hand.

This shows that he was spared seven years ago and is now the ruler.

The king’s advisors all kept what happened seven years ago a secret from the king.

Yeong-shin then arrives in the capital and meets up with Beom-pal.

They proceed to have a reunion and Yeong-shin hands him a journal from Seo-bi. It shows all of Seo-bi’s findings on the resurrection plant so far, with a detailed explanation on how it works and how to stop it.

It isn’t complete however as there are still some unexplained things like why the zombies thrive in extreme heat.

In the next scene, there’s a flashback on Prince Chang swinging the sword.

He wanted to kill the baby at first but decided not to. Prince Chang knows that the baby is not the true descendant and is Moo-young’s child.

He then decided that the baby should be the one to rule and not him.

Why is that so?

We’re not fully certain but it could be because he knows who the baby’s father is and trusts the baby to be a righteous king with the proper advisors. Apart from that, it would attempt to stop the power struggle against the Haewon Cho Clan.

Prince Chang may also be feeling guilty for his father’s death and feels he’s not qualified to be king.

In the next scene, we’re brought back to the present time.

Yeong-shin reveals to Beom-pal that the resurrection plant is found all over the place. 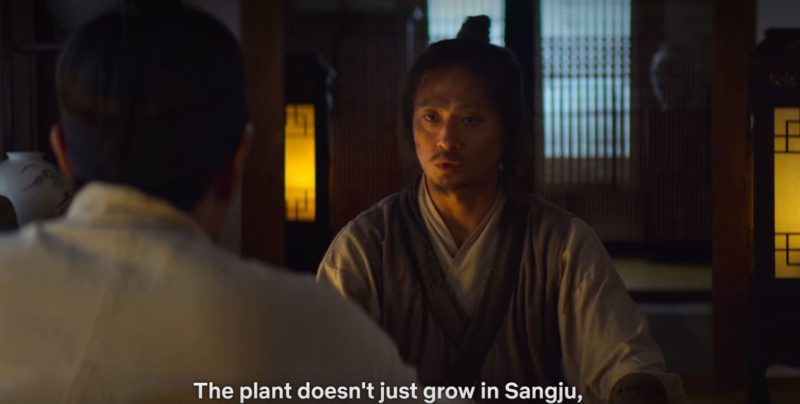 Chang is later seen with Seo-bi and more men up north as they investigate the locations where the resurrection plant is found.

They then talked to two men from the village as they apparently planted more of these plants for selling.

These men were told how to plant and obtained seeds from some unknown person.

Chang and the rest then went to a northern village and discovered an empty village. Seo-bi first found the resurrection plant inside a small box.

They then encountered a single zombie, with sounds of bells, indicating more to come.

The zombie Chang got rid off seems to have a bracelet on the ankle, filled with small bells.

She seemed to be near the group, standing close to some cages filled with zombies.

Also, the young king is shown at the ending scene where the worm seems to have crawled from his old wound to his head. It indicates a potential outbreak at the capital.

Season 2 of Kingdom ends here but there’s a good possibility for a continuation.

Will there be a season 3?

We think there should be a season 3 for Netflix’s Kingdom, especially if it does really well on Netflix in terms of viewership.

They’ve kept the story pretty open with a potentially larger outbreak, and a new culprit who’s spreading the resurrection plants seemingly on purpose.

Plus, they’ve included Jun Ji-hyun at the last few seconds of season 2, most probably with the intent of her starring in season 3 of Netflix’s Kingdom.

All the evidence seems to point to a third season for this amazing Korean zombie / period drama.

Netflix’s Into The Night Ending Explanation