In the latest quest titled Revenge of the Cartels: Ultraviolet Nights or The Revengening, you’ll be tasked to go to Villa Ultraviolet.

During the first quest, you had to get a Golden Mask / fountain piece to get to the cartel boss.

In the same room which looks like a library, there’s a puzzle hidden.

Here’s how you can solve the puzzle in Villa Ultraviolet in Borderlands 3.

Disclaimer: The password for the hidden room may differ from player to player, but the steps are the same.

Get to the middle of the mansion

In the first quest “Ultraviolet Nights”, you’ll have to get the fountain piece from a room in the middle of the mansion.

Before you can enter the room, you need to secure the area which looks like a hall. 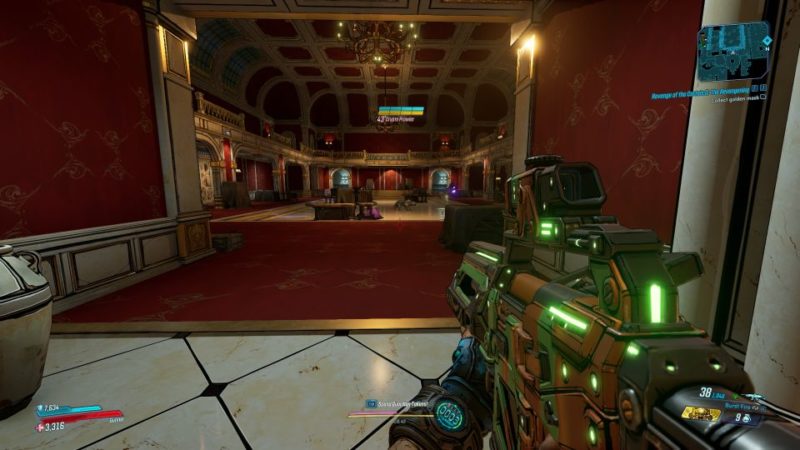 Take out all the enemies. There will be a few waves of them. 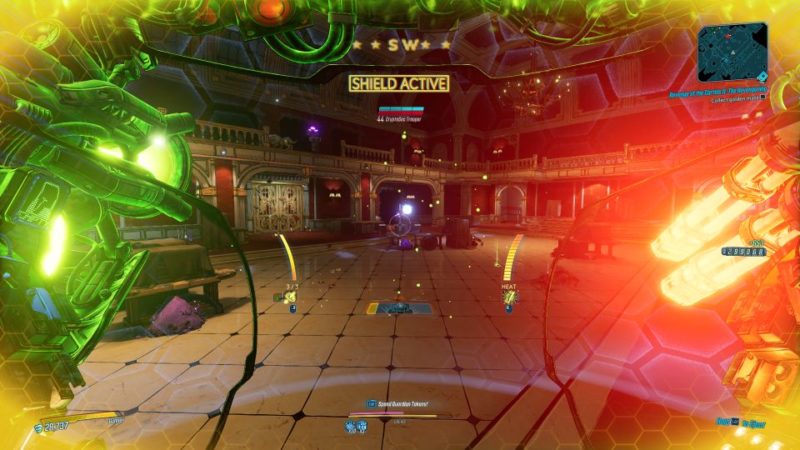 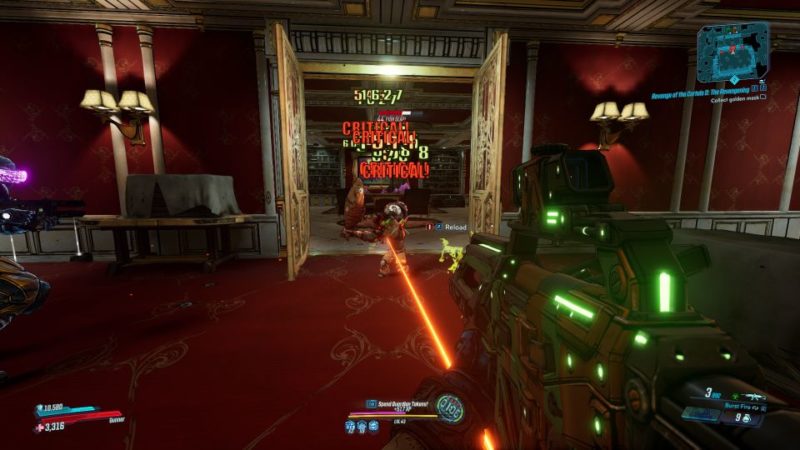 How to begin the puzzle

Once you’re in the room, there’s an optional puzzle for you to do.

To begin, use the keyboard in the middle of the room.

You will see the four screens in front of you light up. Ignore them first. 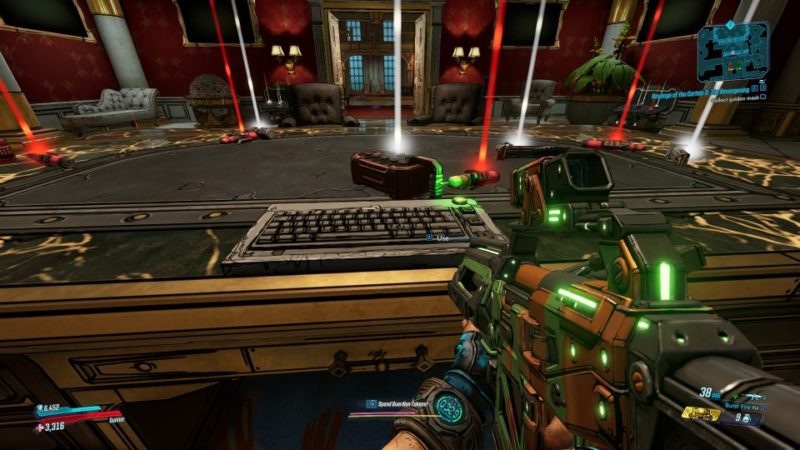 How to solve the book puzzle

You should find a shelf with numbers 1 until 9. This is where you need to key in the passcode later.

Also, you should look at the numbers and how they’re arranged.

Remember the sequence of the numbers. 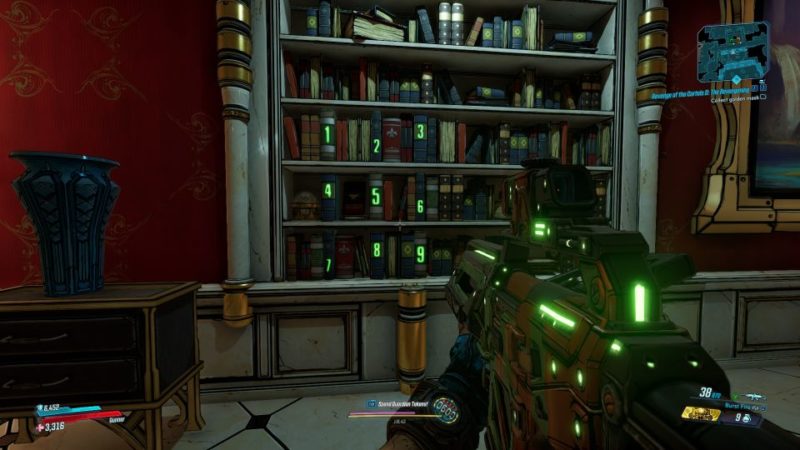 Next, you’ll need to find another shelf with some glowing objects.

On the shelf, you should see a triangular object, a cube and a circular object / cylinder.

They basically represent the objects on the four screens that lit up after you used the keyboard. I’ve labeled them in the image below.

Now, look at the three layers directly above each object.

If you look at it properly, you can see three empty spaces directly above the triangle, cube and cylinder, but there’s always one golden item in each of the three layers.

The location of the golden item above each object indicates the number that forms your passcode.

As you can see in the image below, I’ve labeled the empty spaces with the same number sequence as the one you saw in the other shelf. 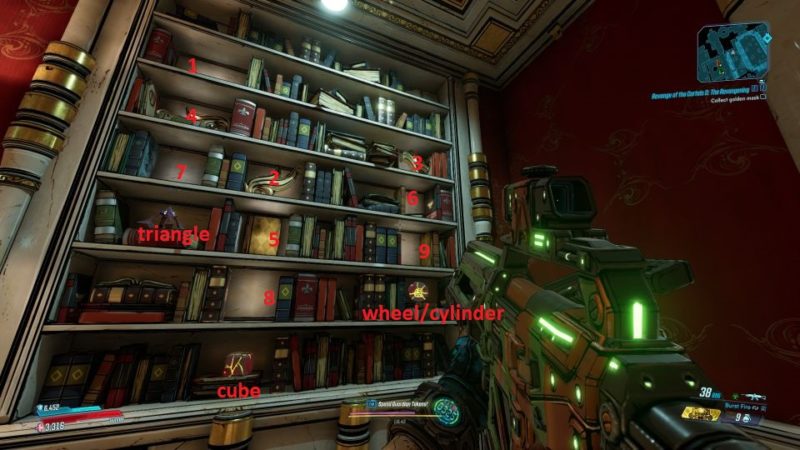 Connect the symbols with the numbers

Counting from the left, the first golden object is in the second layer above the triangle, so it is labeled as “4”.

The second golden object above the cube is on the top layer, so it is labeled “2”.

As the third golden above the wheel/cylinder is on the top layer as well, it is labeled “3”.

All these numbers were labeled according to the sequence of numbers on the bookshelf you saw earlier.

Key in the passcode

Now, go back to the four screens in front of you.

You can see the symbols.

Just substitute the symbols for the numbers. 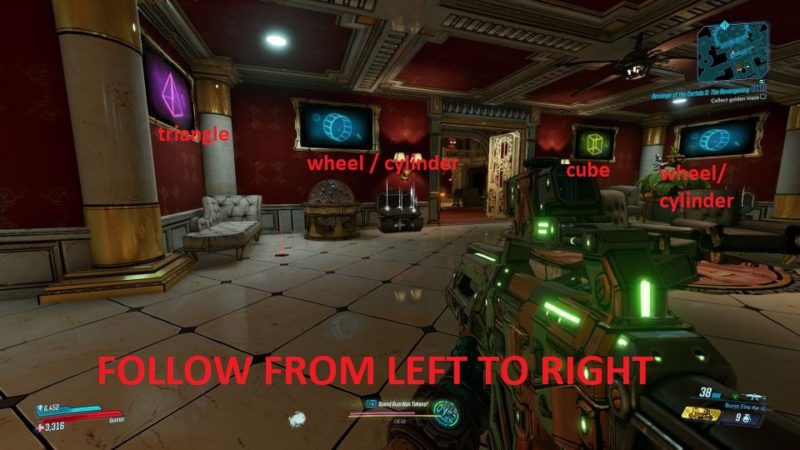 In this case, it is “4323” based on what I’ve labeled earlier. Follow left to right sequence.

Once you have the number, go back to the bookshelf with the numbers 1 – 9.

Interact with the books according to the passcode you found.

Once the passcode is correct, a secret door opens. 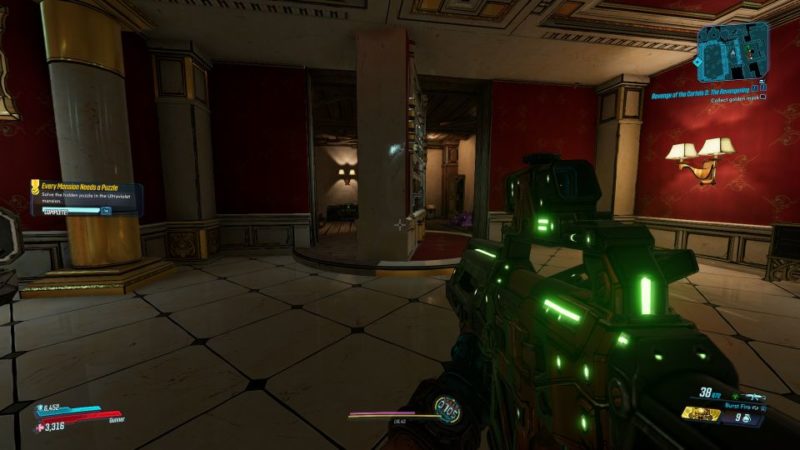 Inside the room, it’s mainly just loot and eridium. 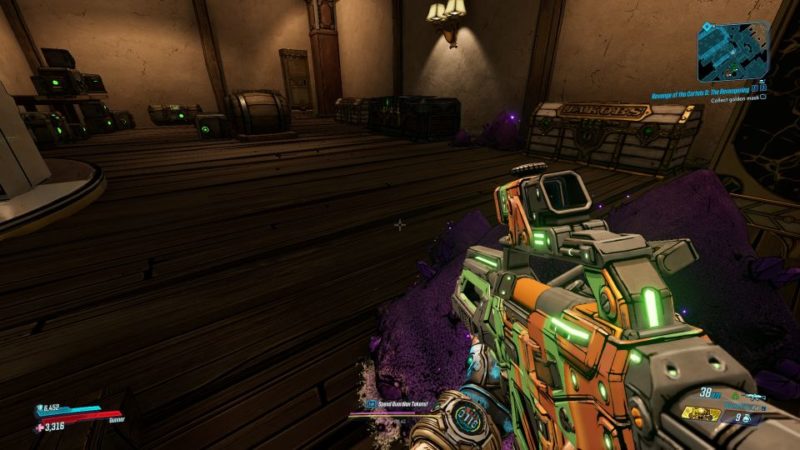 Revenge Of The Cartels II: The Revengening Walkthrough – Borderlands 3

How To Get The Golden Watering Can Recipe – ACNH