Episode 2 of Forest of Secrets 2 was just released hours ago and tension has already started to rise.

The struggle of authority between the police force and the prosecution will only get worse.

Here’s a recap of episode 2 of Forest of Secrets 2 (Stranger 2) which is available on tvN and Netflix.

Recap of episode 2 – Forest of Secrets 2

Shi-mok continues to investigate the drowning case as he looks at the time the photos were posted on Instagram.

He then asked the police officer about the students (two who died) who stayed at the guesthouse nearby. Apparently an old lady staying nearby heard the boys going out of the guesthouse and it coincided with a show she was watching at 8.06 pm, so the time when the boys left the house could be guessed.

The couple who posted the we-fie did it before the students even left, making it more likely that they cut off the restriction lines.

Shi-mok then tries to contact Prosecutor Ryu Si-yeong who was in charge of the case but couldn’t get him.

Yeo-jin who is at home finally hears the news that Director Kim Myeong-han is the high ranking officer (senior superintendent) who may be involved with the leakage of confidential information.

She then goes to office and sees him being taken away. However, he was taken by their own police force rather than the prosecution, as part of Chief Choi’s plan. She wants to stop the prosecution from taking the director.

Yeo-jin then speaks with Choi in her room where the latter explained the reasoning behind the detainment of the director. 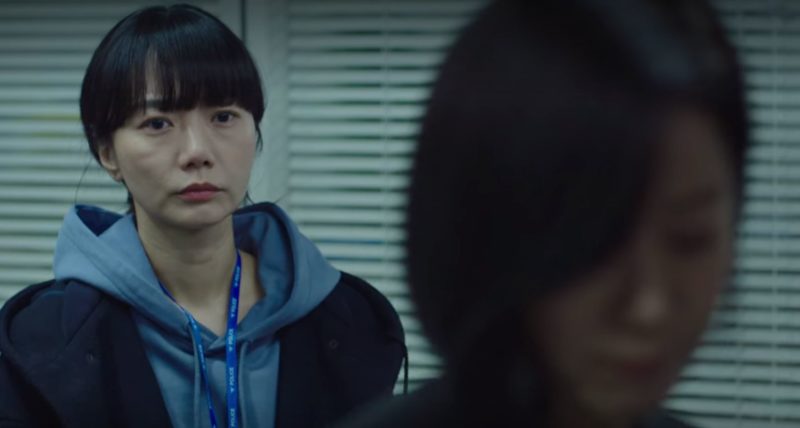 After Yeo-jin left the room, Choi calls Assistant Chief Prosecutor Woo Tae-ha, informing him that the police will do the investigation on the director. 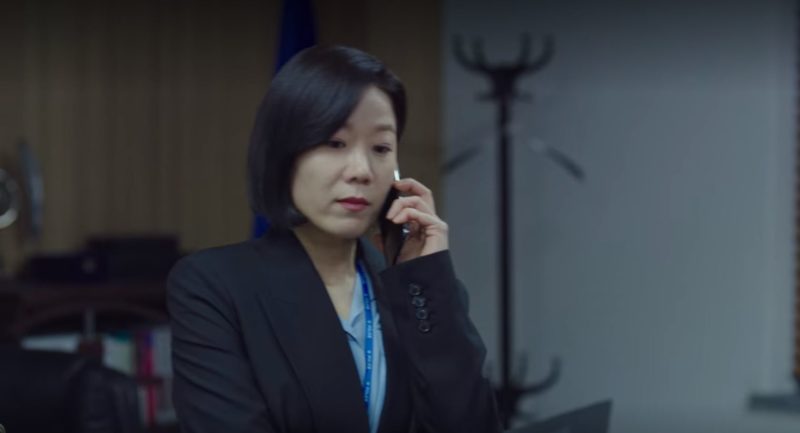 Shi-mok then calls Yeo-jin about the drowning case again saying that the case was closed by the prosecution, possibly because the lawyer (Oh Ju-seon) was a former presiding judge. He then says he will file a complaint against the procedure. 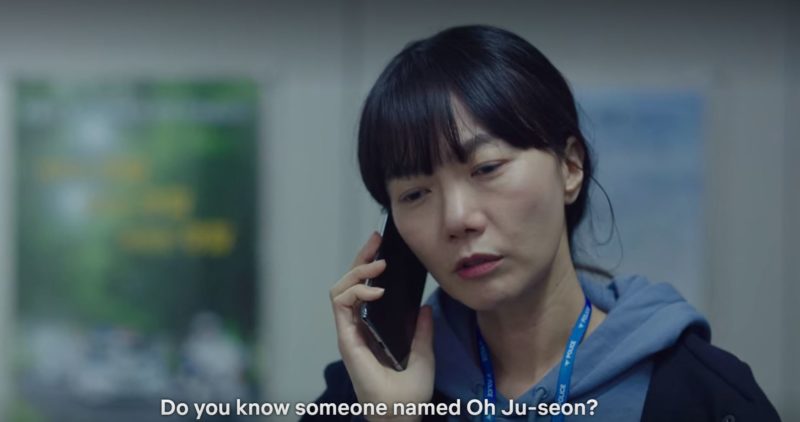 Chief Choi then appears at one of the victim’s father’s house with a whole bunch of press. It seems to be part of the plan to undermine the prosecution, as the case was closed very early by the prosecution, making it likely that special treatment was given to the former-judge-now-turned-lawyer. 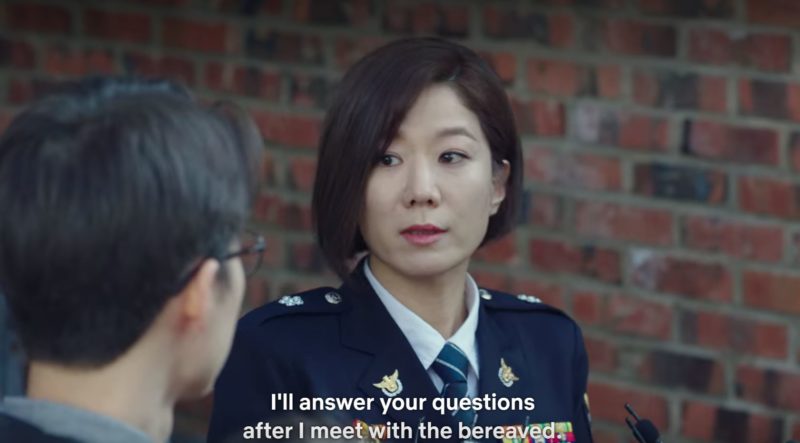 The press also questioned the current Chief Prosecutor Kang Won-chul on the issue later. Won-chul is also aware of the complaint by Shi-mok and asks his colleague for the Tongyeong branch chief’s phone number. 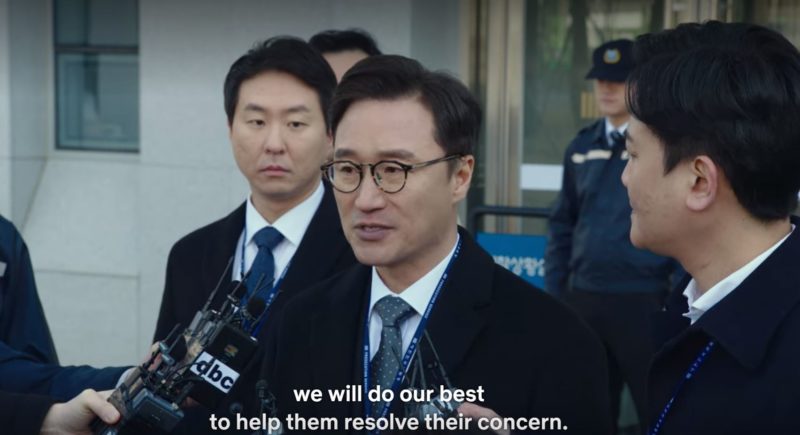 Shi-mok is now seen driving towards Wonju which is his next branch office. Before he arrived, he gets a call by his assistant Mr. Lee saying he should not head to the Wonju branch immediately. Perhaps Won-chul said something to the branch chief earlier. 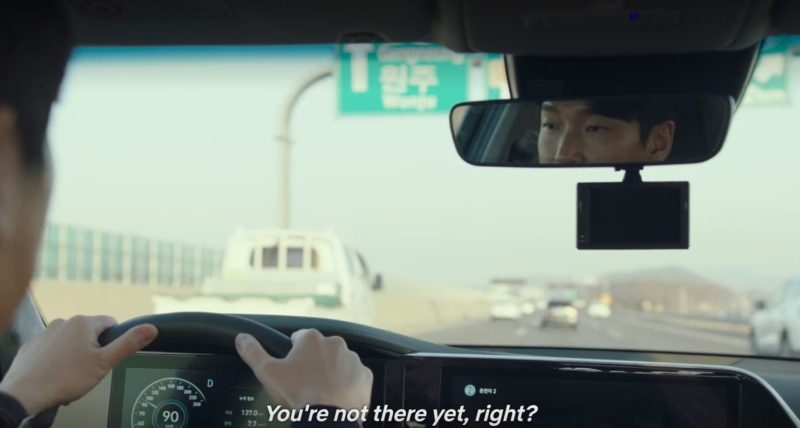 Shi-mok then stops at a rest area to kill time. 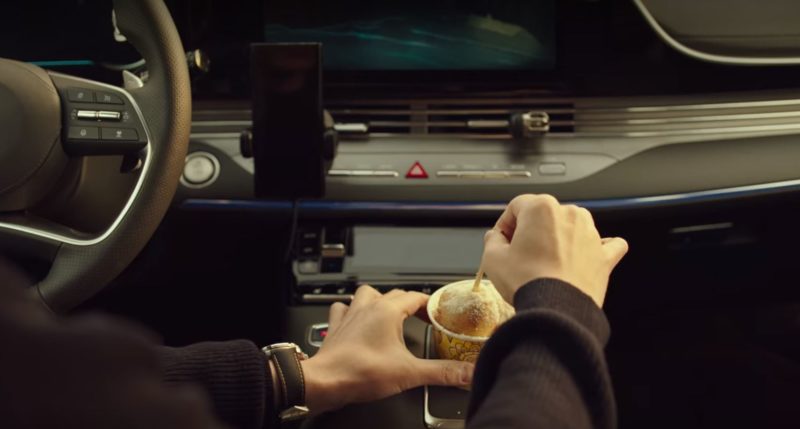 He also bought some food but then gets a message and a call from Woo Tae-ha. The latter who works at the Criminal Legislative Division in the Supreme Prosecutor’s Office asks to meet him.

Shi-mok finally meets Tae-ha at the office. Tae-ha explains that Shi-mok has been recommended to join the Criminal Legislative Division at the office and will be involved with the Police-Prosecution Council.

He also mentions that some prosecutors were against Shi-mok’s appointment in the division. 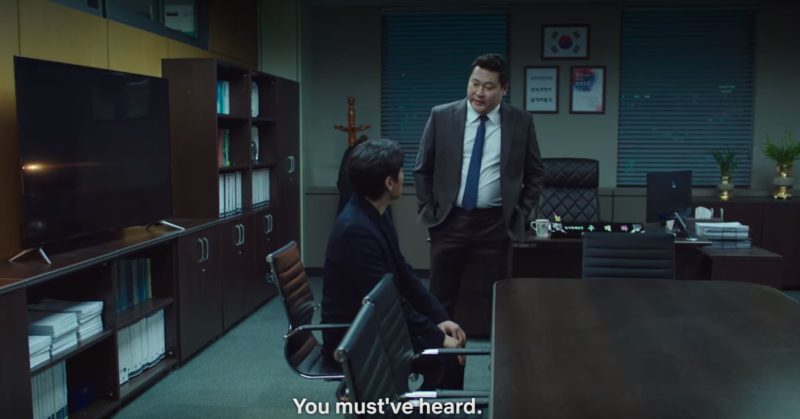 As he’s still leasing out the previous condo unit, he now stays in a hotel room temporarily. On his laptop, he does a search on Tae-ha. 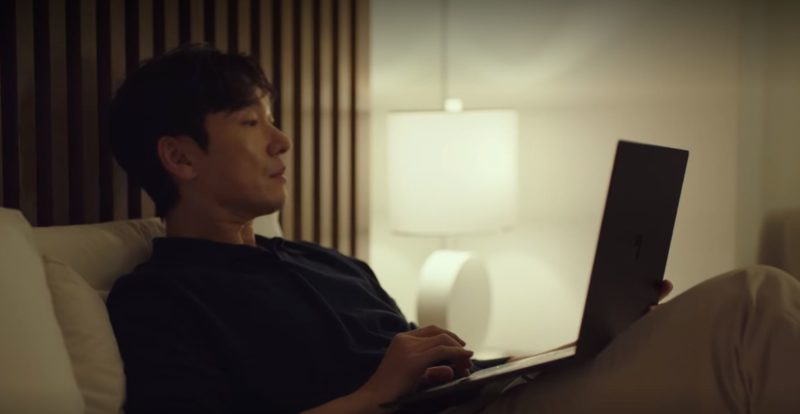 Shi-mok then visits Chief Prosecutor Won-chul at the office. He knows that Won-chul was against the appointment although Tae-ha didn’t mention who. Won-chul explains that his appointment was recommended by Chief Choi possibly because Shi-mok might lead to the Bill on investigative authority be approved as law later. The prosecution is against the Bill as it will mean that they will no longer have exclusive investigative authority. 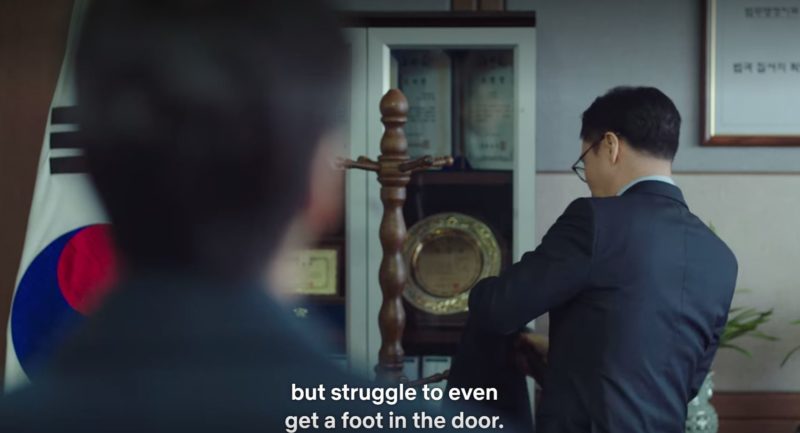 Shi-mok then talks about the drowning case and asks why Won-chul closed it. The latter says it’s hard to prove the case as you’ll need to prove that cutting the restriction lines directly caused the drowning. Shi-mok however explains that he made a complaint against the procedure of closing it, rather than the outcome of the case. If the investigation is done in 3 months, it would give the couple some time to feel some remorse. As the case was closed quickly, it will only make them more snobbish due to special treatment.

Won-chul then shows Shi-mok a new article by Sungmoon Daily, saying that Shi-mok made his former boss Lee Chang-jung a hero when he was a criminal; that he only disclosed the documents out of fear rather than righteousness. It is part of Chief Choi’s plan to undermine the prosecution. 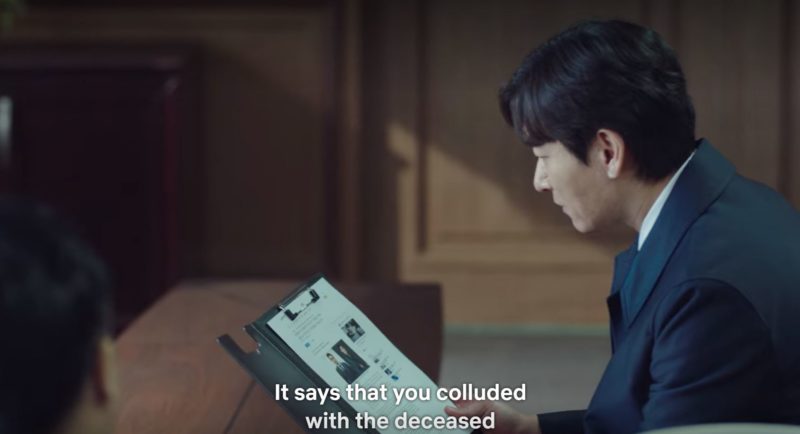 Won-chul also says that he is still in pursuit of Hanjo Group as he intends to bring them down.

Yeon-jae who was the wife of late Chang-jung is now the CEO of Hanjo Group. Her father was brought down in the previous season of the show and she took the reins of the company.

She is seen having a board meeting discussing company affairs. Yeon-jae also sees the articles negatively portraying her late husband and screams out of anger. 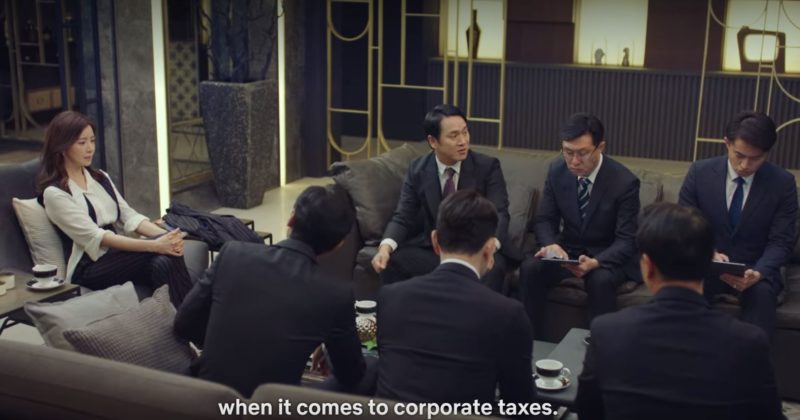 As Shi-mok leaves the office, he sees someone familiar entering the building. Seo Dong-jae finally makes an appearance and this time, he’s scheming again. He meets with Tae-ha and gives suggestions or ways to counter the police force. He shows a previous case which was possibly closed by the police (specifically Chief Choi) by abusing their authority.

Dong-jae claims that he can help Tae-ha to win the struggle against the police (pertaining to investigative authority) by investigating further on the old cases. 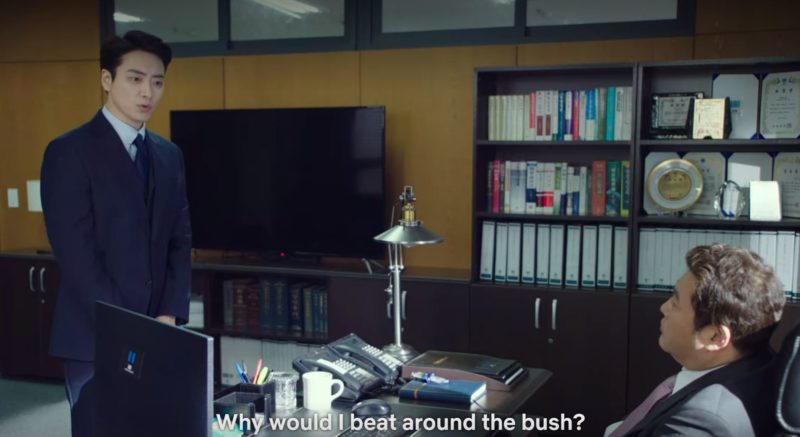 As Dong-jae leaves Tae-ha’s room, he shockingly sees Shi-mok after a long time, and notices that Shi-mok works here even though a job here is hard to get among prosecutors. 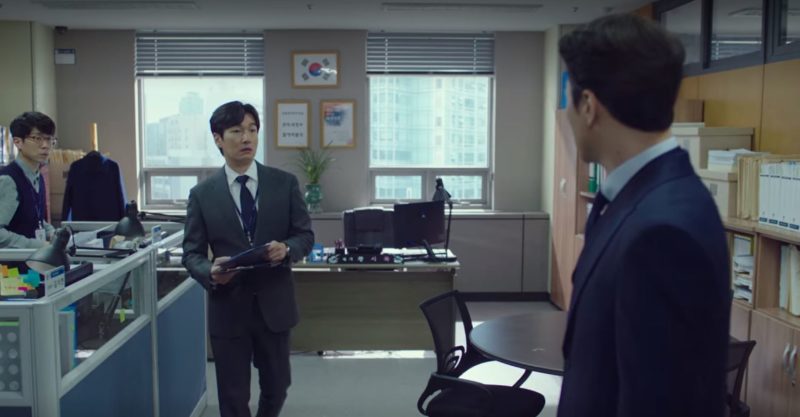 In the National Police Agency, Choi, Yeo-jin and two other colleagues begin their meeting. They discuss who should enter the Police-Prosecution Council, and agreed on Yeo-jin, Choi and a director of the Investigation Bureau. The fourth member will be appointed by Yeo-jin herself (I assume it will be Jang-gun). 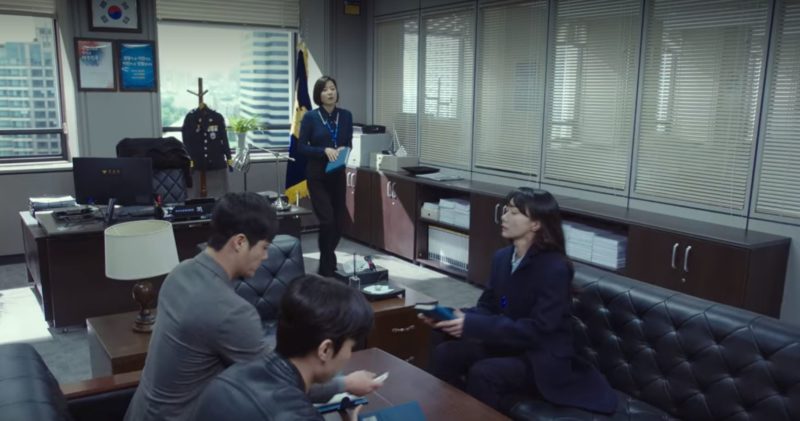 Similarly, Tae-ha, Shi-mok and the rest also discusses the members for the council. Shi-mok and Tae-ha will be part of it and possibly Chief Assistant Kim Sa-hyun. 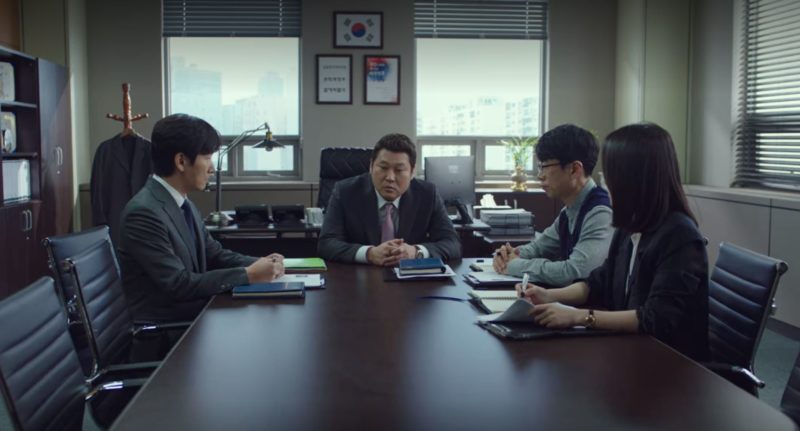 After the meeting at the police side, Chief Choi meets Director Jae-yong. He then mentions that the prosecution’s case against Director Myeong-han seems to be personal vendetta rather than the prosecution showing their power. Choi who seems to know something about it keeps silent. 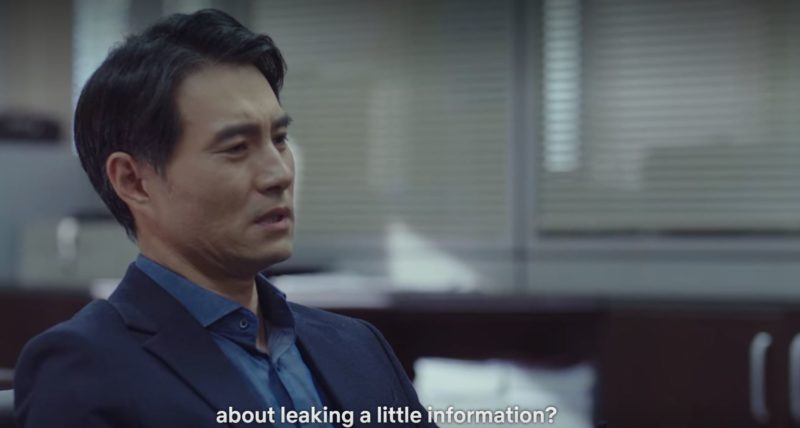 At the prosecution’s side, Tae-ha asks Shi-mok about Seo Dong-jae, asking if that guy’s reliable. Shi-mok then says ‘depending on the situation’. He also notices a file on a police suicide at Segok Station. 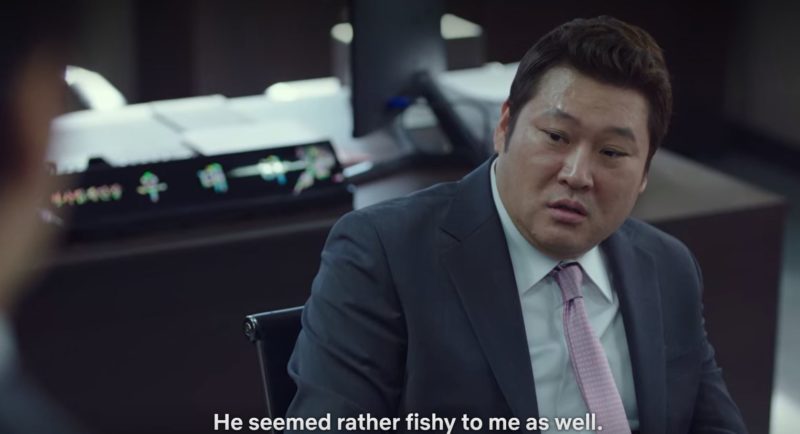 After leaving the room, he makes an online search about the police station case. Shi-mok then calls Yeo-jin to meet up at Seocho-dong. 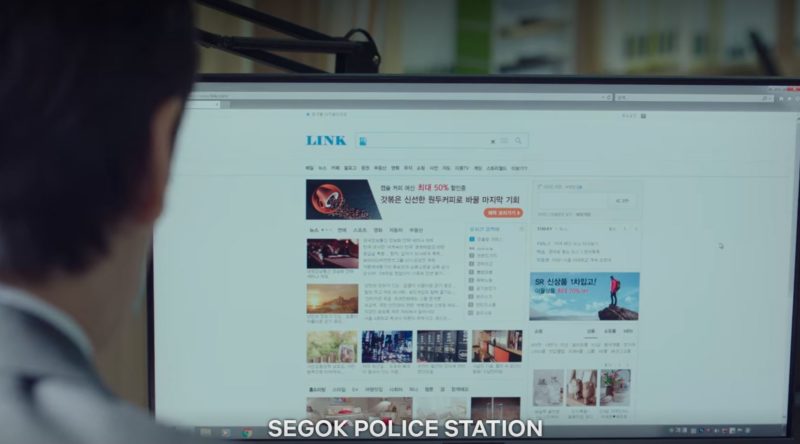 Dong-jae then gets a call from Tae-ha, possibly for a meet up. 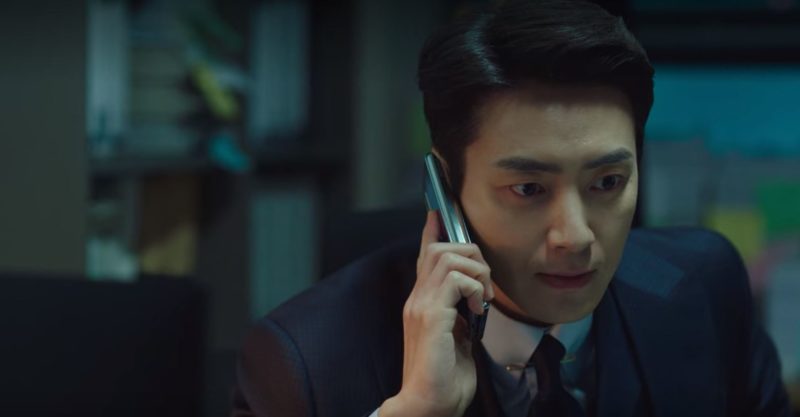 Tae-ha’s assistant then asks Tae-ha for a signature as Shi-mok applied for a room at the dormitory without him knowing.

He is then aware that Shi-mok probably has nowhere to stay. 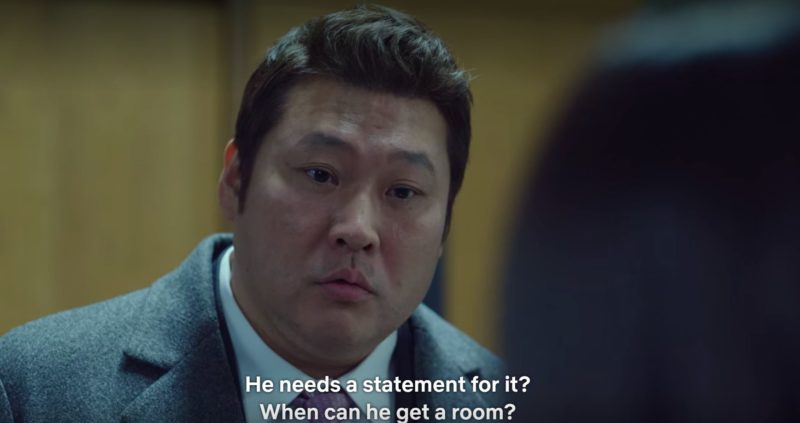 At the restaurant, Shi-mok and Yeo-jin finally meets after a long while. He then tells her about him joining the Police-Prosecution Council and she gets surprised about it. Yeo-jin however didn’t mention to Shi-mok about her joining the council as well. 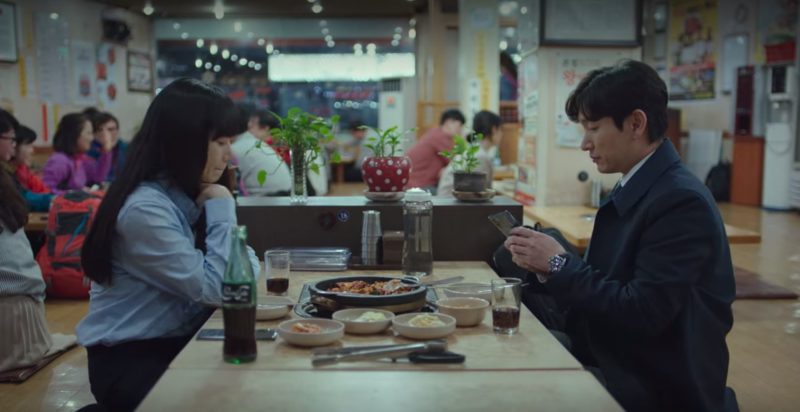 Shi-mok gets a call and left the restaurant before eating. He meets up with Tae-ha but is shocked to see Dong-jae as well. The episode ends with a possibility of the two working together again. 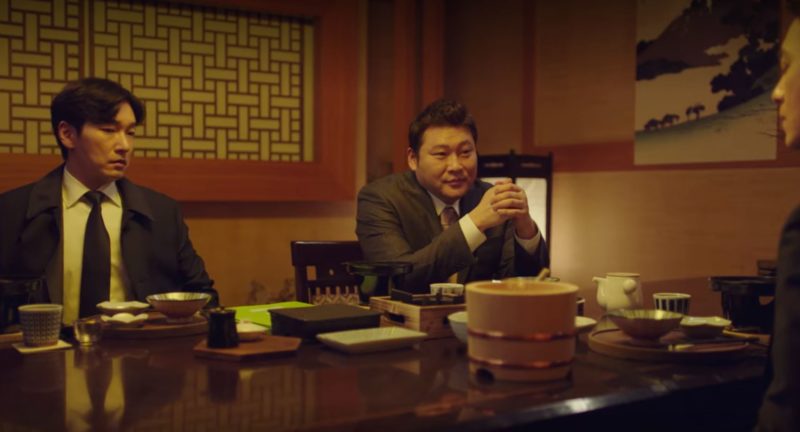 ‘Was It Love?’ Episode 12 Recap – Ha-nee Learns The Truth