Episode 3 ended with the police and the prosecution heading for their first council meeting to discuss investigative authority.

This episode will be on the prosecution-police council and also on the Segok station ‘suicide’ case.

Here’s a recap of Forest of Secrets 2 (Stranger 2) episode 4.

Recap of Forest of Secrets 2 – episode 4

The show begins with Tae-ha, Si-mok and Sa-hyun going for the meeting. Sa-hyun who is driving behind Tae-ha and Si-mok plays around, swerving his car and honking at them. Tae-ha then puts his fist out of the car window as a reply.

Si-mok enters the council room before everyone else. He sees on his phone news that the Chief of the Eastern District Prosecutor’s office has criticized the article from Sungmoon Daily. This means Won-chul has taken the advice of Lawyer Oh from the previous episode to go against Sung-jae. 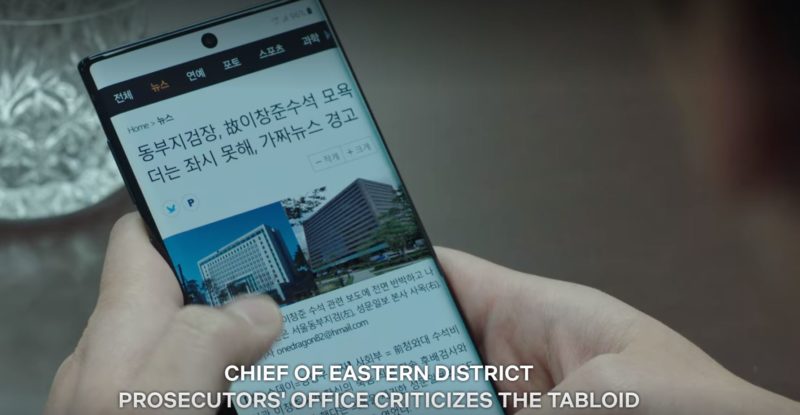 Chief Choi, Yeo-jin and Jang finally arrives and meets Si-mok. They were friendly when they met and Yeo-jin even mentioned about Jang’s two kids to Si-mok. Yeo-jin sees Chief Choi staring at them and kept quiet, but Choi says she ‘won’t bite’. 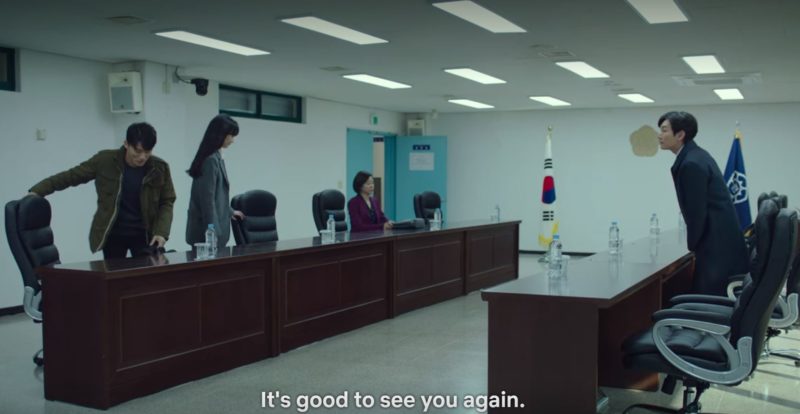 The rest of the prosecution and police members finally arrived for the meeting. All of the members took a group photo before debating the issue. 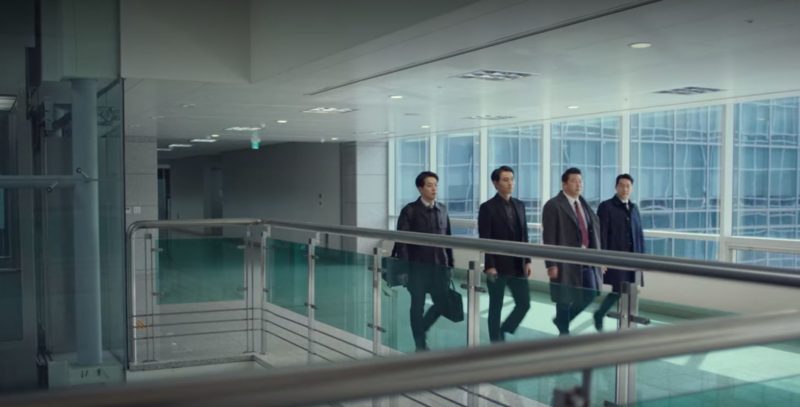 The police brings up the issue of warrants, that the prosecution shouldn’t be in the middle, as judges will ultimately decide to issue warrants. Sa-hyun disagrees saying that right has been enshrined in the constitution, making it hard to amend.

The police responded saying that the addition of that clause to the constitution only happened after the military coup in the past. Sa-hyun refutes the claim saying it was never amended even though there were four constitutional amendments since the military coup — so the law should not be changed. 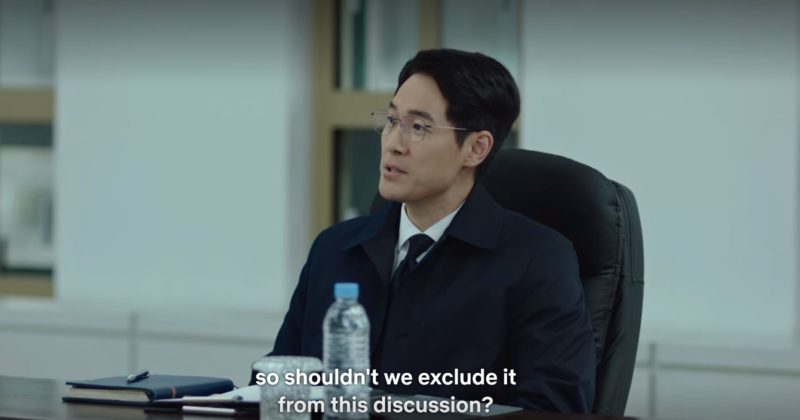 Yeo-jin tries to counter it by using a real case, talking about a senior prosecutor who dropped certain cases, freeing potential criminals just to make money. Tae-ha tries to downplay the whole issue, saying it happened 10 years ago — meaning the situation isn’t as bad now. 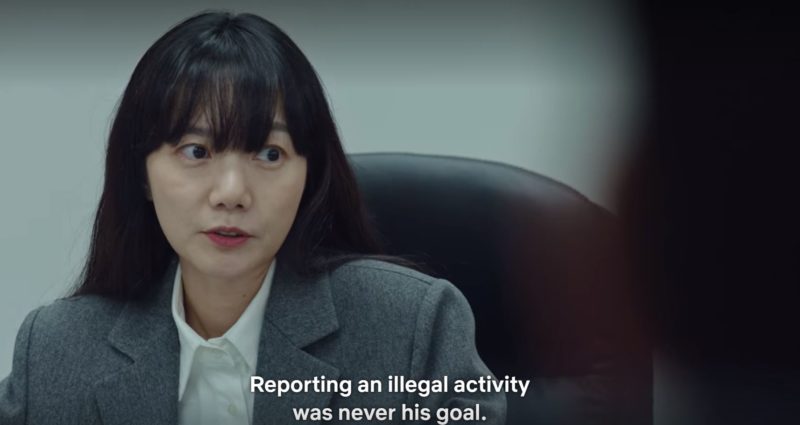 Jang-geon then gave a recent example about a rental scammer. The scammer conned a number of people pretending to be the real landlord. 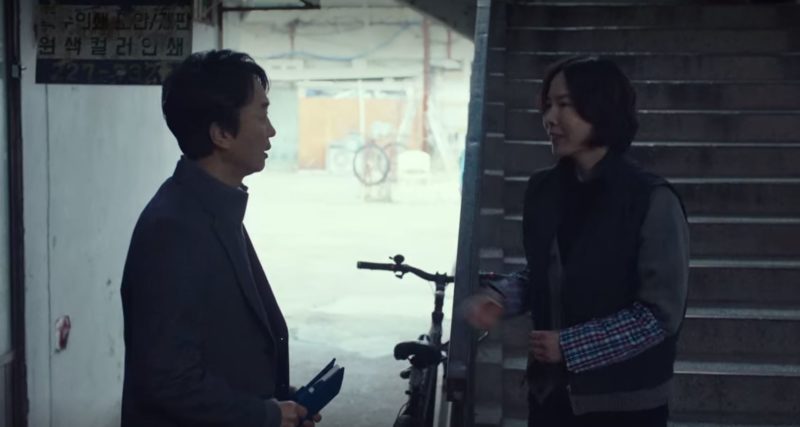 We also see Jang and the team from Yongsan station chase after and eventually apprehended the rental scam suspect. However, they haven’t gotten the warrant approved and the suspect will walk free soon if the prosecution doesn’t approve the warrant.

There’s also an issue of the prosecution still asking the police to bring the suspect, even though the law has changed years ago and that the police no longer needs to completely follow the prosecution’s orders. 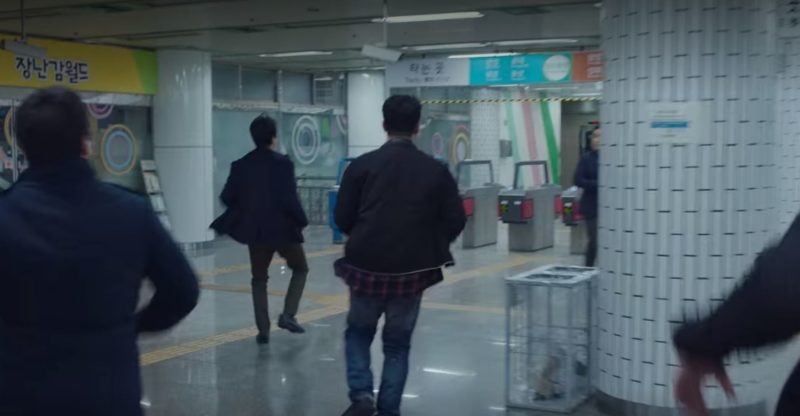 While thinking about the issue, Si-mok flashbacks to an older case where a lady prosecutor was demoted for talking on a radio show about external pressures. The lady prosecutor apparently offended some ex chief prosecutor who became a lawyer, and was later demoted. 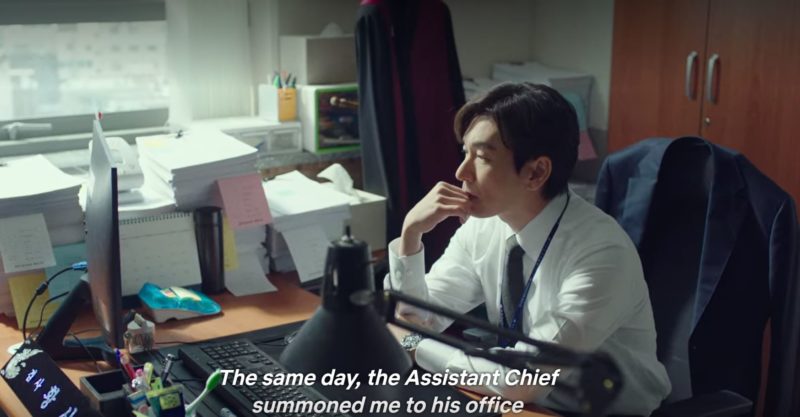 Back in the present, Sa-hyun makes a case saying that the prosecution has 2,000 members and that the police officers have 150,000 members. He brings the issue that if just 1% of the police makes a mistake with requesting warrants, it will already be 1,500 officers. Chief Choi refutes remarking that Sa-hyun is trying to say the prosecution is more qualified just because they have lower numbers.

Si-mok finally responds saying that the decision to request warrants should be held by those who can prevent the misuse of such authority. He then poses the question on how the police is going to deal with so many officers affecting the outcome of whether to prosecute or not to prosecute a case.

Director Jae-yong then says they’re thinking of bringing law experts into this but Si-mok interrupts, saying there should be at least one difference between the police and the prosecution. If the police has the same powers, there will be redundancy.

Yeo-jin then claims that you have to ‘see a different doctor to get a different treatment‘, and Sa-hyun immediately interrupts asking ‘what if the doctor is a quack (unqualified)?’. 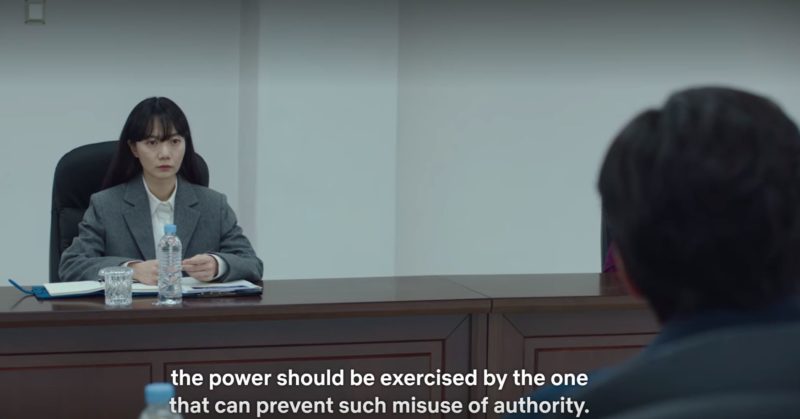 Chief Choi immediately responds asking who the quack here really is, and the two sides start arguing. The prosecution side then left after a short heated argument. 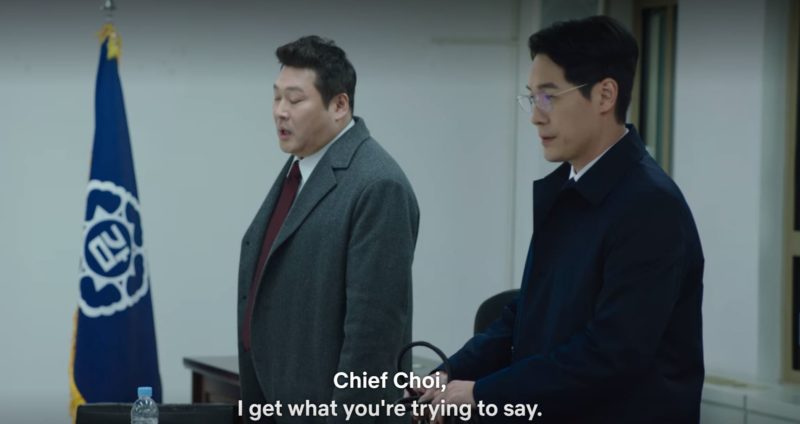 As they’re leaving, Tae-ha starts complaining, asking who withheld the warrant for Jang’s case. Tae-ha plans to ask someone from the Western office about the warrant. Sa-hyun then asks Si-mok to recommend some places to eat and wants something hot. 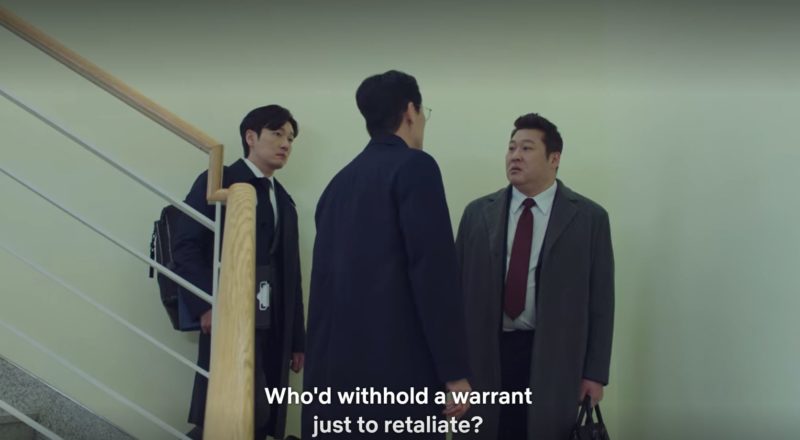 The police side who are also fuming after the meeting wants to take something spicy. 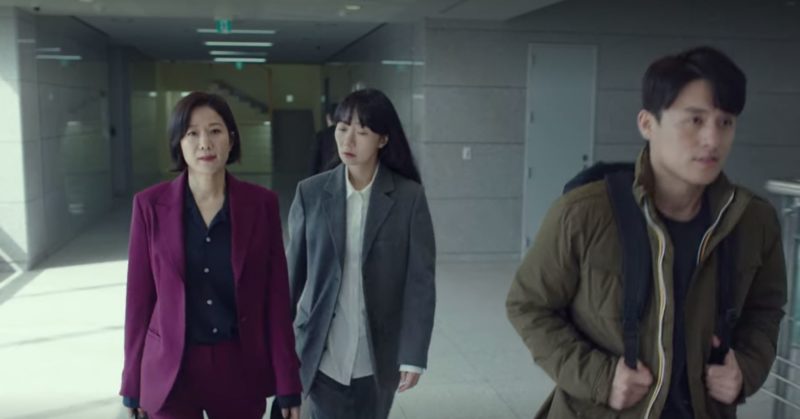 Yeon-jae is then seen at a meeting regarding Hanjo Group. Lawyer Oh is also present at the meeting. The issue is that Sung-jae holds the biggest amount of shares, followed by Yeon-jae and the third biggest is the CEO of Sungmoon Daily (Byung-hun) whom she doesn’t like. Byung-hun is also close to Sung-jae.

They assume that Sung-jae plans to remove Yeon-jae as the chairperson. 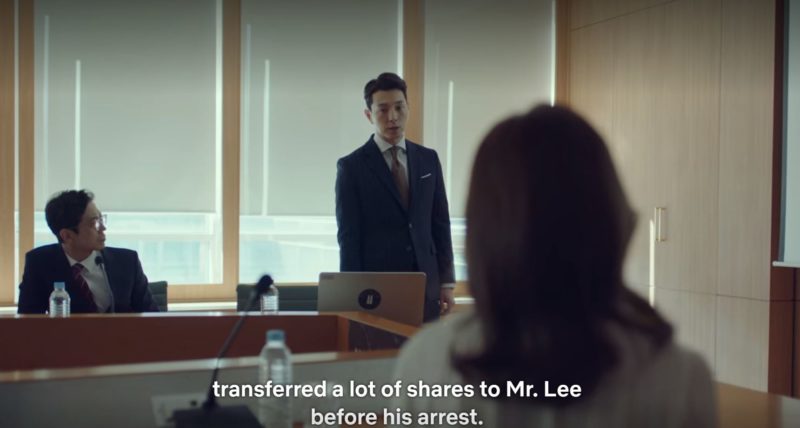 Yeon-jae then visits Yoon-beom at the family home but was refused entrance by the maid. The maid also passes along a message saying Yoon-beom disowns Yeon-jae as his daughter, and asks her not to visit again. 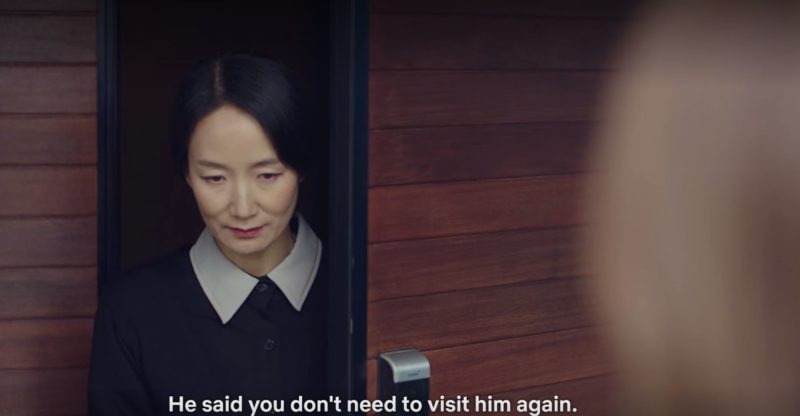 Yeon-jae heads back to her office and sees a note saying Seo Dong-jae wants to meet her. 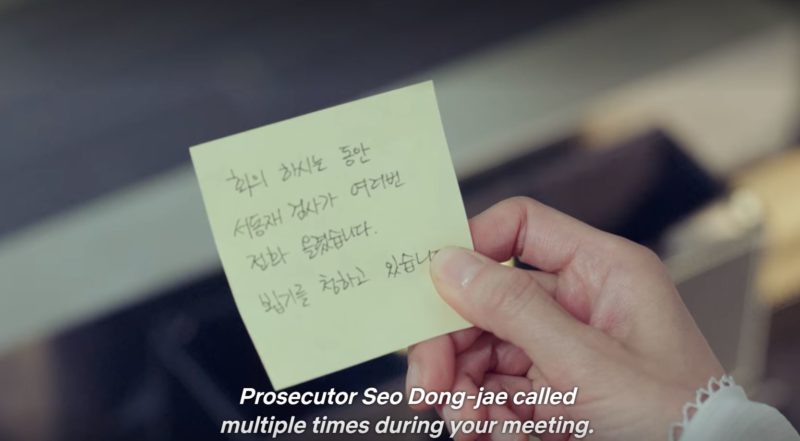 Si-mok, Tae-ha and Sa-hyun is seen eating at the restaurant while watching football. They asked Si-mok if he liked football, volleyball or even baseball but Si-mok said he doesn’t watch any sports. Sa-hyun then asked if he has a girlfriend and at the same time, Si-mok gets a call from Yeon-jae. 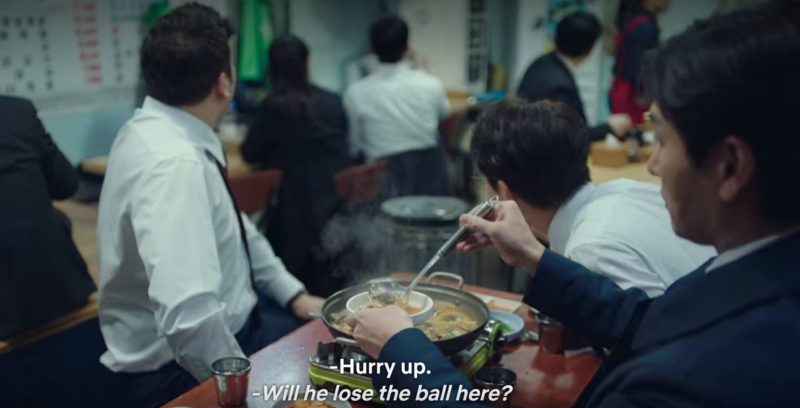 The police group is also seen having a meal as they’re still pissed off with the prosecution. Meanwhile, Chief Choi gets a message from the Chief of Yeoju station, saying a prosecutor from Uijeongbu asks about the Segok station case. 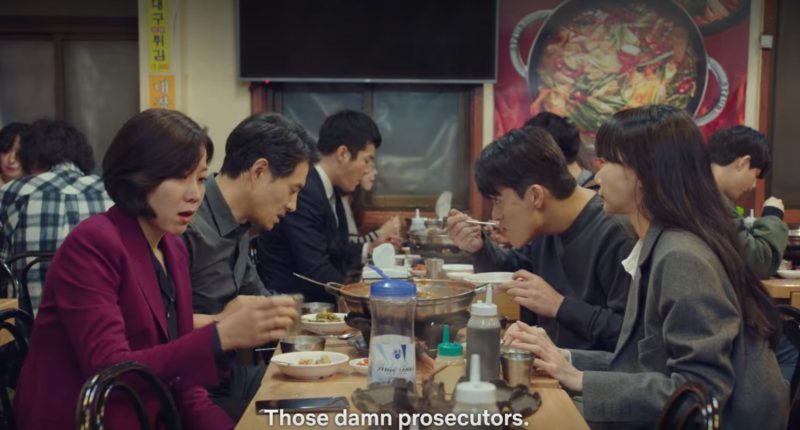 Choi then asks for the prosecutor’s name as she suspects something is wrong. 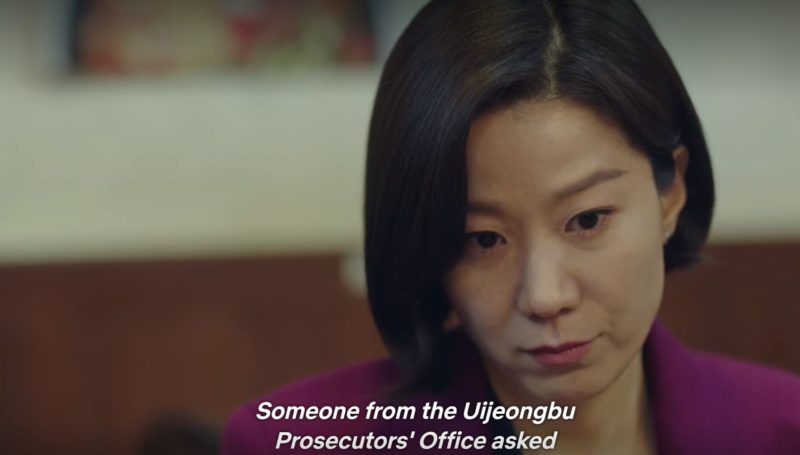 Jang comes back to Yongsan station and is seen treating the wounds he got from chasing after the rental scam suspect. Captain Yoon-soo asks Jang if Si-mok could help with the warrant. Jang however replies saying that Si-mok is just like the other prosecutors and probably won’t help. Also, the police HQ didn’t say anything about helping with the warrant, making Captain Yoon-soo frustrated. 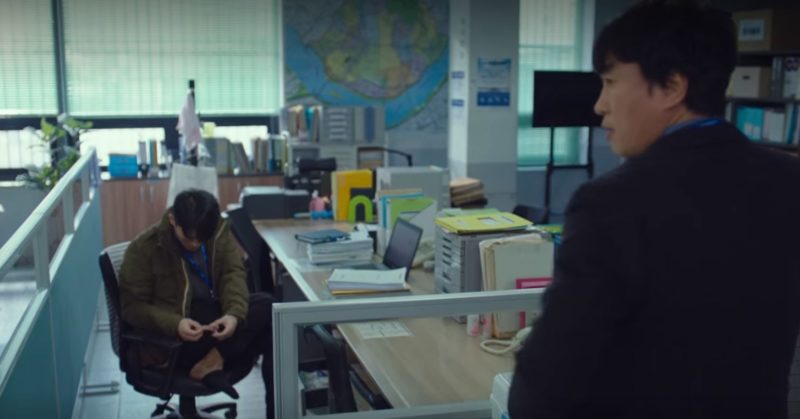 After lunch, Tae-ha drops Si-mok at the side of the road. Si-mok then gets a lift from Yeon-jae right after.

Sa-hyun who was in the car behind thought that Si-mok went for a blind date with a lady. 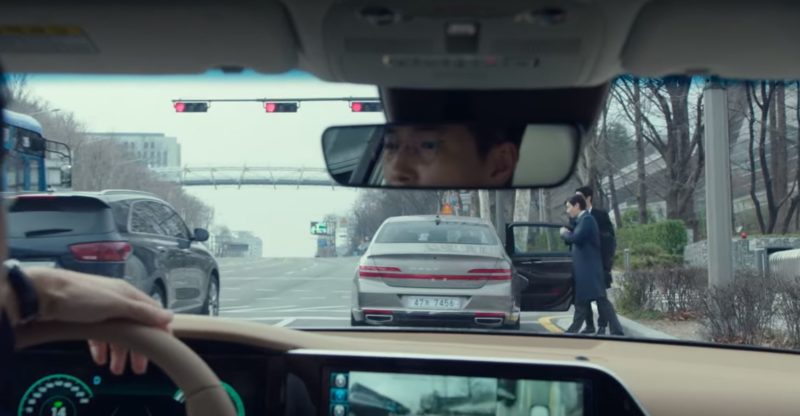 Yeon-jae asked Si-mok to help with the negative article by Sungmoon Daily, but Si-mok only suggested straightforward and legal ways to deal with it, to the disappointment of Yeon-jae. 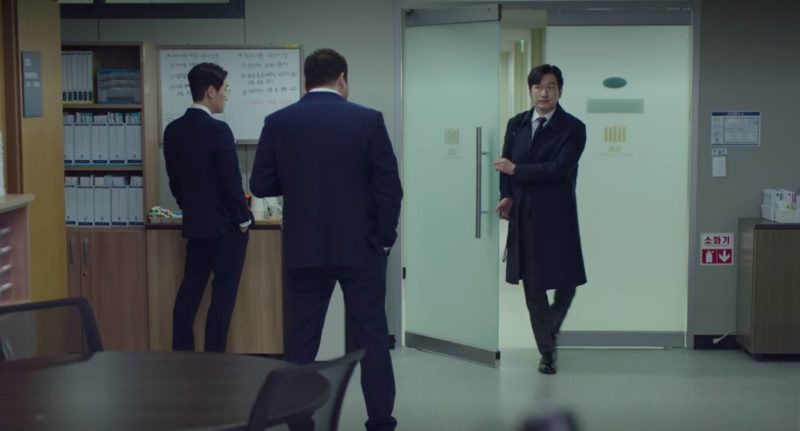 As Si-mok returns to the office, he gets a call from Dong-jae saying they should meet tomorrow instead. At the office, Sa-hyun asks Si-mok why he came back so early (assuming he went for a date).

Dong-jae is then seen at Hanjo Group with Yeon-jae. Dong-jae tells Yeon-jae that he heard a rumor about Lawyer Oh working for her unofficially, as Oh apparently mentioned it to his wife.

He then asks Yeon-jae whether she knew Chief Choi and a late prosecutor Park Gwang-su. Gwang-su was one of the cases that Dong-jae raised with Tae-ha at the beginning of the season. It’s the guy who died from drunk driving although he apparently didn’t drink alcohol much.

Yeon-jae’s assistant, Mr. Park, seems to know a bit about Park Gwang-su but Yeon-jae continues to deny remembering him. Her assistant then left to check on something. 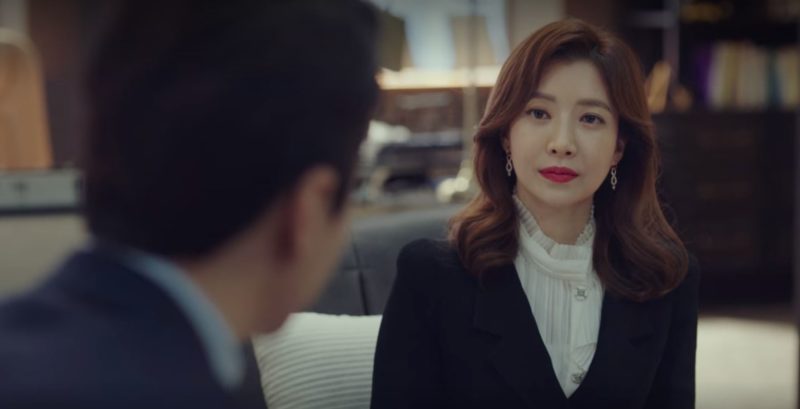 Dong-jae butters up Yeon-jae and gets a job to pass a letter to her dad Yoon-beom. 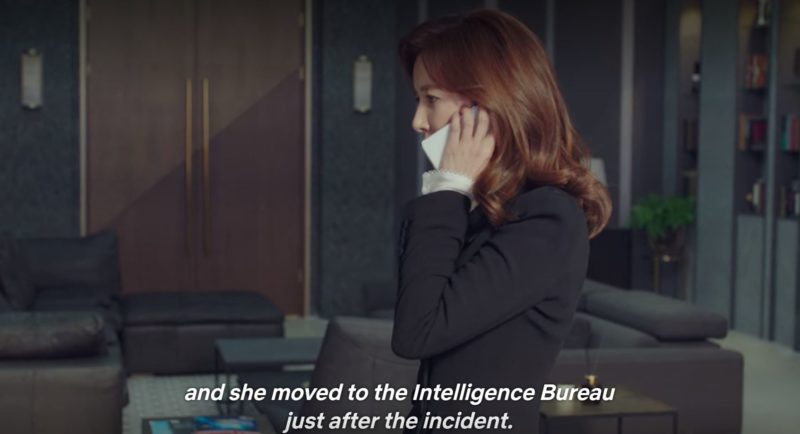 Dong-jae arrives at Yoon-beom’s house and manages to get into the compound as he wishes to give a present. He passes a present over to the maid but was not allowed to enter the house, as Yoon-beom is apparently not in.

Dong-jae then asks for a glass of water as he sneakily looks around the house. The maid who has been suspicious from the start also notices what he’s doing. 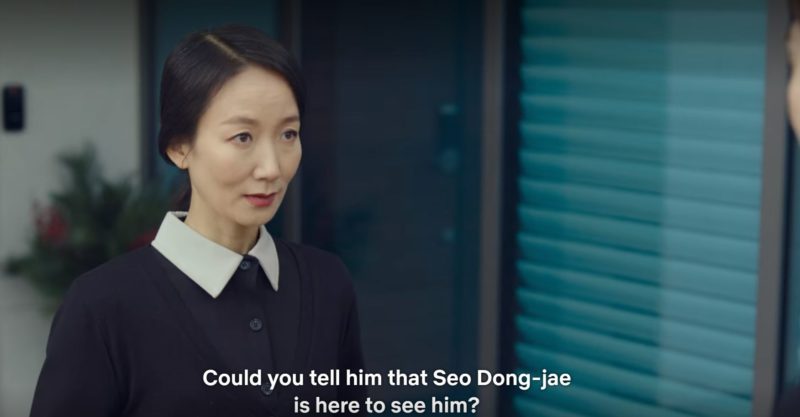 Dong-jae then appears at Hanjo Group’s office again, bringing back the letter, saying he failed to deliver the letter. He did not put the letter inside the present as he doesn’t want others to read it.

He however gave Yeon-jae a bunch of labels that were probably taken from medicine bottles. Earlier, Dong-jae went through the trash outside of Yoon-beom’s house as he saw the maid throwing stuff. He also saw a lot of medicine bottles, implying someone is ill in the house.

Dong-jae does his usual buttering up of Yeon-jae, saying he roots for her as the chairperson of Hanjo. 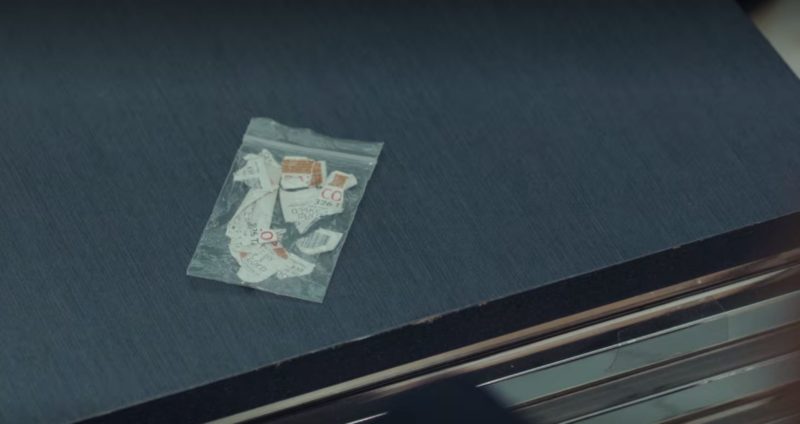 Chief Choi meets Yeo-jin and asks her if she knows Seo Dong-jae from Uijeongbu station. Choi also wants to know why the prosecutor is digging up the old case. Yeo-jin then remembers Si-mok asking her about Segok station. 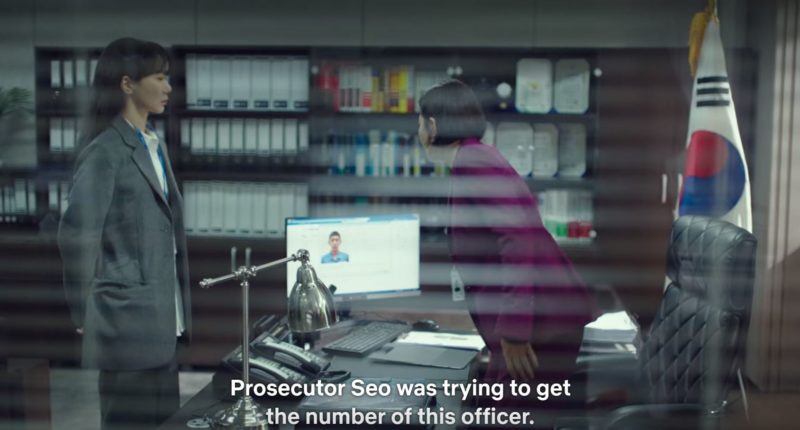 As she suspects something, Yeo-jin herself went to Segok station to find Jung-gi but the latter went on vacation. She then asks another police officer (Chang-yong) to meet her in the car.

Chang-yong was a witness to the 2017 bribery as he was working at Segok back in 2017, but he wasn’t part of the team that was caught for bribery. 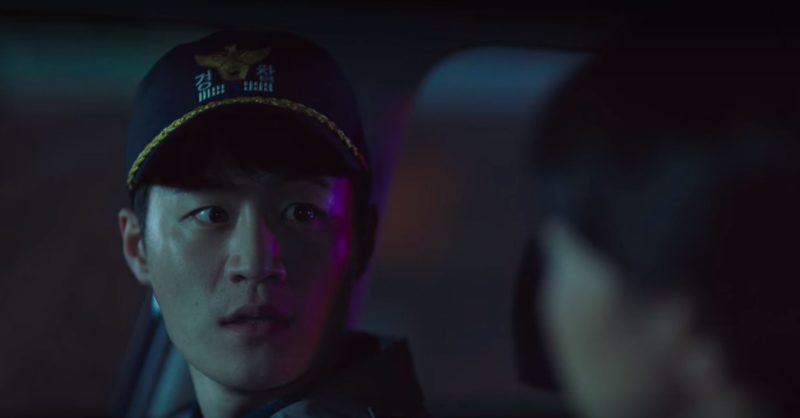 He recalls Gi-hyeon being bullied by the team members, including the chief at the time — Jung-gi. Gi-hyeon also confronted Kim Su-hang, one of the members who bullied him.

Also, Su-hang was the one who apparently first found Gi-hyeon in the shower room. 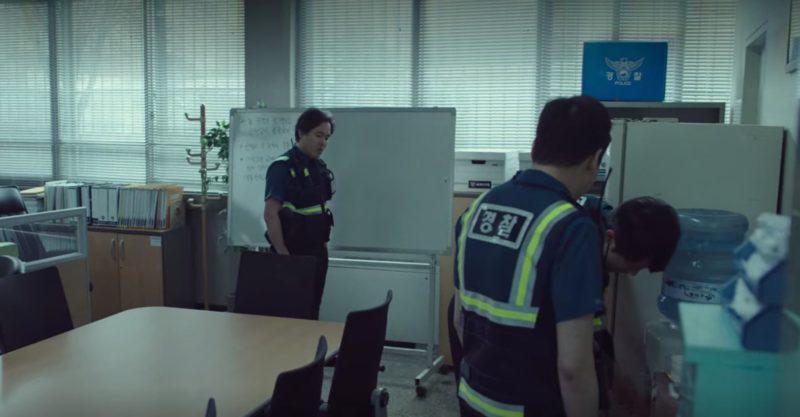 Yeo-jin reports the matter to Chief Choi, and the latter was clearly upset as there’s an obvious foul play. Yeo-jin also makes a remark saying that it’s a suicide and a homicide. 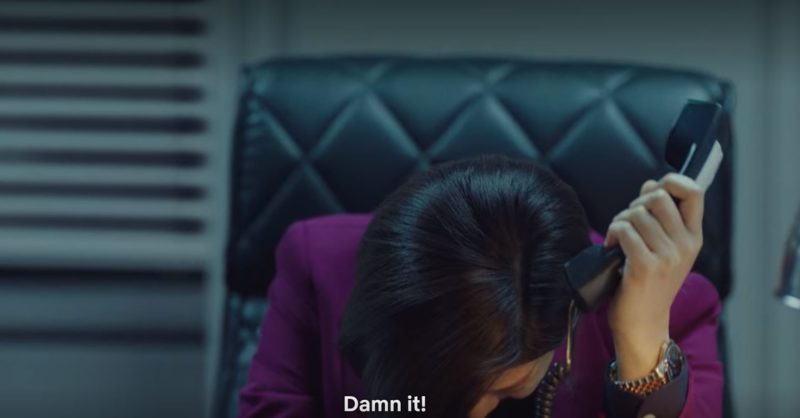