The Warble of a Smitten Knight is a side quest in Blood and Wine DLC.

Your task is to help Guillaume cure Princess Vivienne from her curse.

Here’s a walkthrough of The Warble of a Smitten Knight in Witcher 3.

Suggested level: 35 and above. 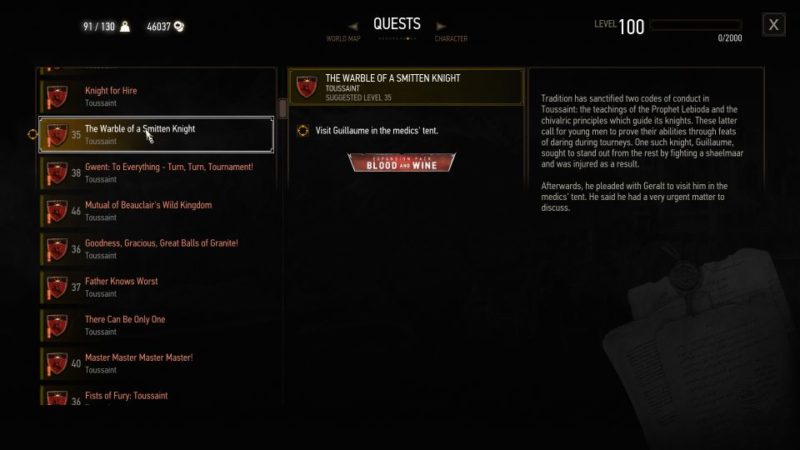 To begin the quest, meet Guillaume at the medics’ tent. 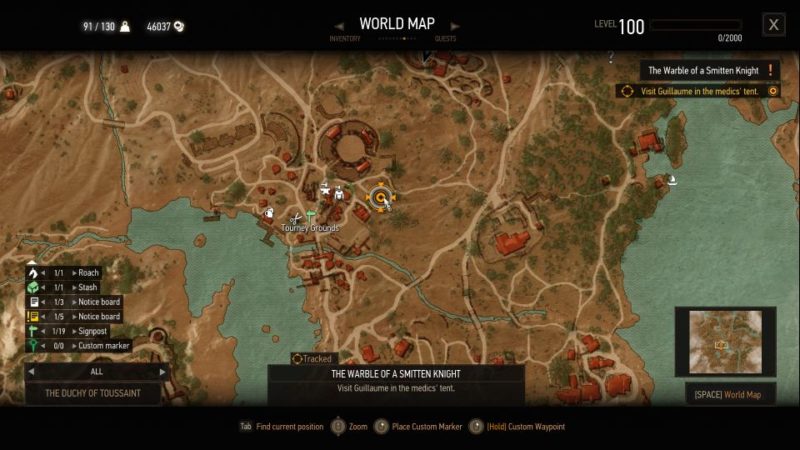 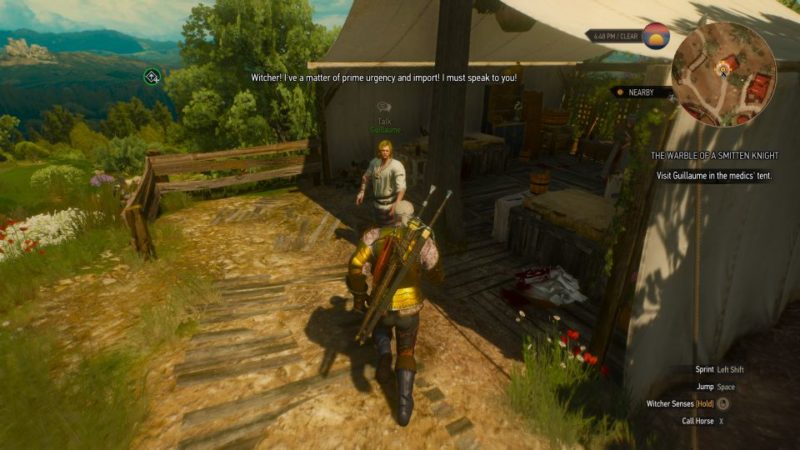 You can negotiate your pay if you want to but you got to keep it at the lower side. 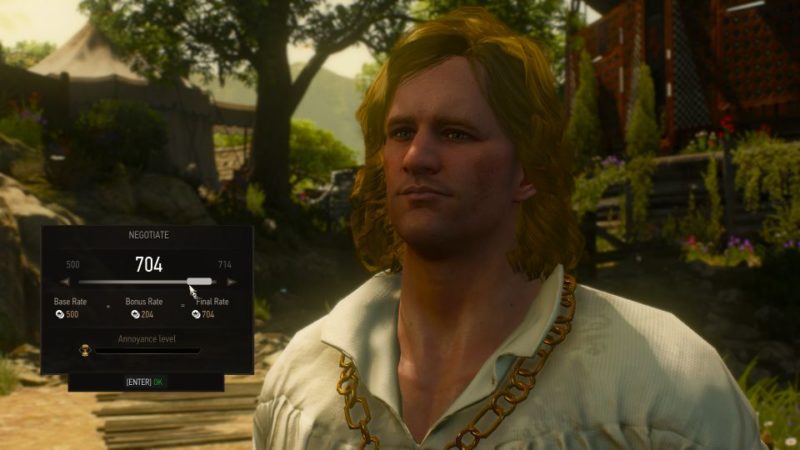 Guillaume will then bring you for practice before the actual tourney.

There will be three parts: 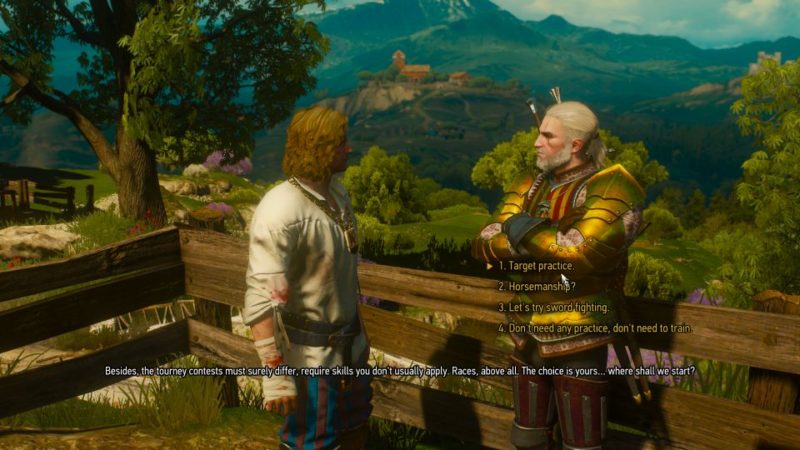 For target practice, you simply have to shoot at the targets.

Hold your crossbow to aim and release. Just do it within the time and you’re okay. 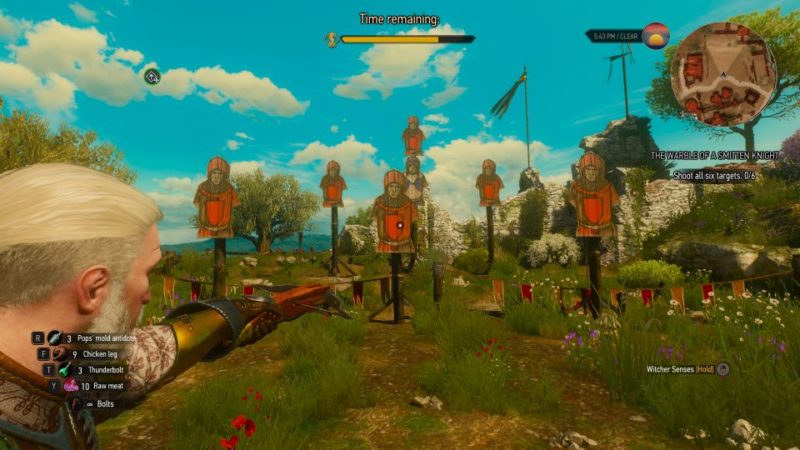 For horsemanship, you need to ride through the checkpoints before the time is up.

To increase the time, you need to shoot at targets and slice heads off dummies.

Do both and you’ll be fine. 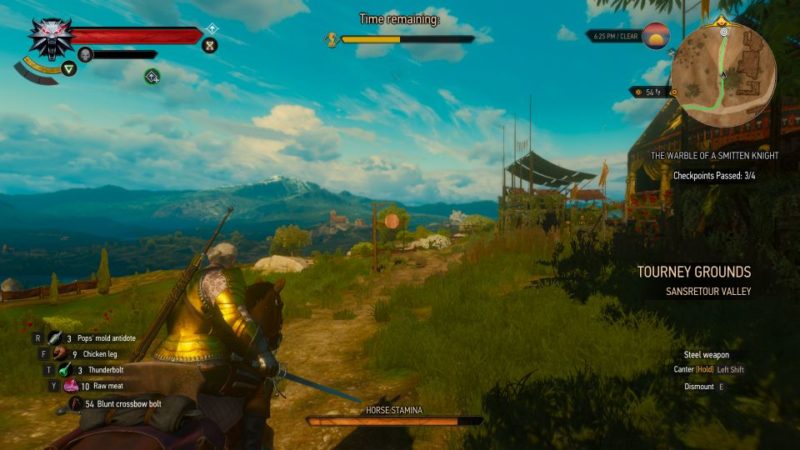 For sword fighting, you just have to defeat the man named Guy. 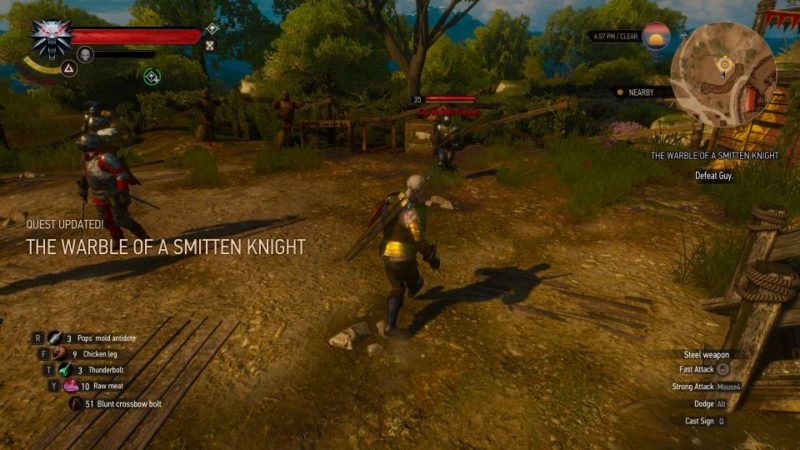 Go to the inscription tent

Once you’re done with practice, head over to the inscription tent to join the tourney. 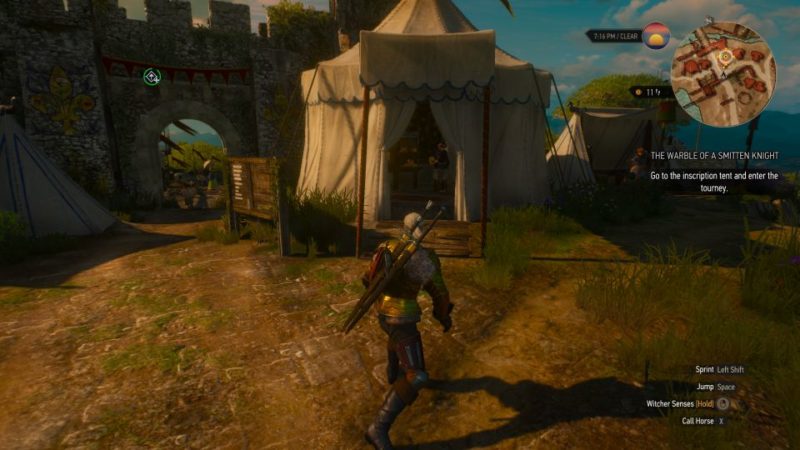 You can join as either Fourhorn or Geralt. 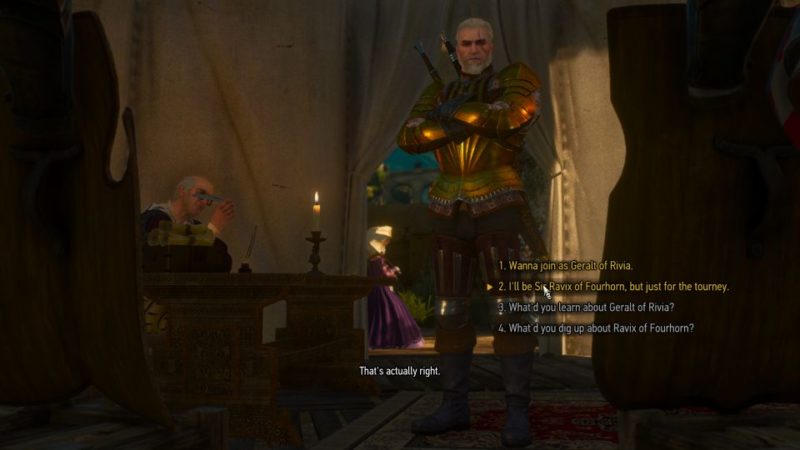 The first match in the tourney is the shooting match.

You simply have to be faster than your opponent in knocking down all the targets with your crossbow.

There are 9 in total. 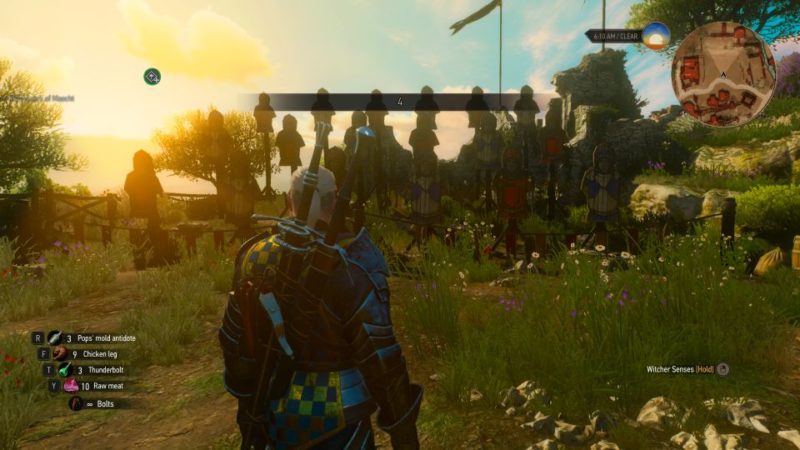 After the match, you have to go to Vivienne’s tent to investigate what curse she’s been inflicted with.

Use your witcher senses to interact with the clues. 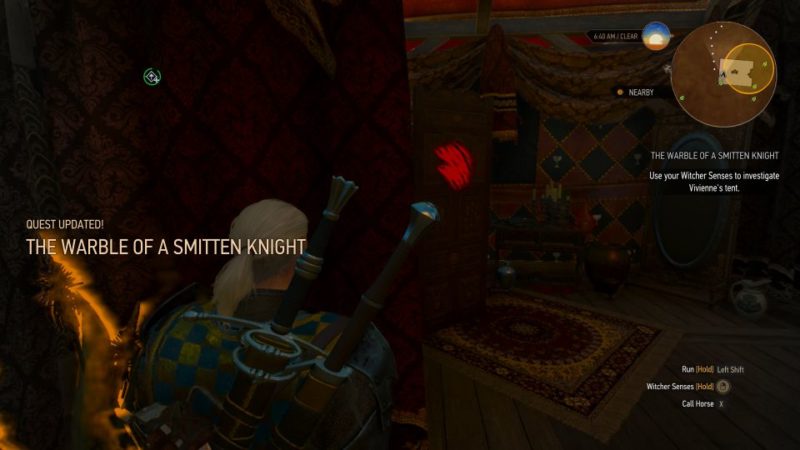 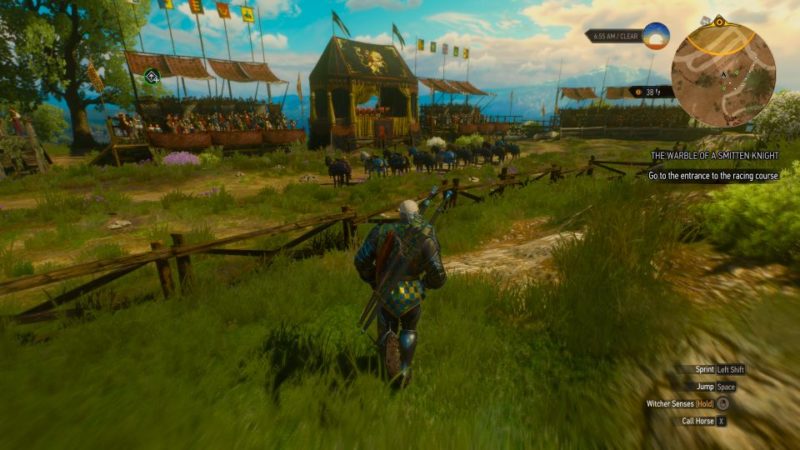 Your aim is to complete the course with 9 checkpoints within the time limit.

As practised, hit the dummy and shoot the targets to buy some time. 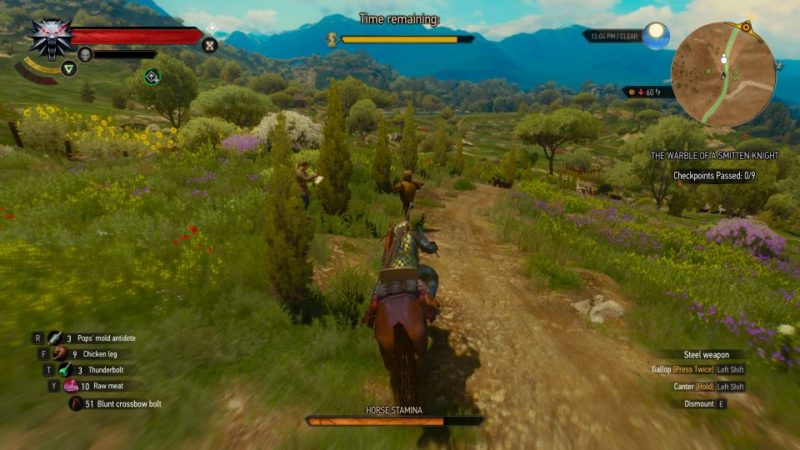 During the feast at night, Tailles will provoke Geralt.

Together with Guillaume, defeat Tailles and his thugs in a punching match. 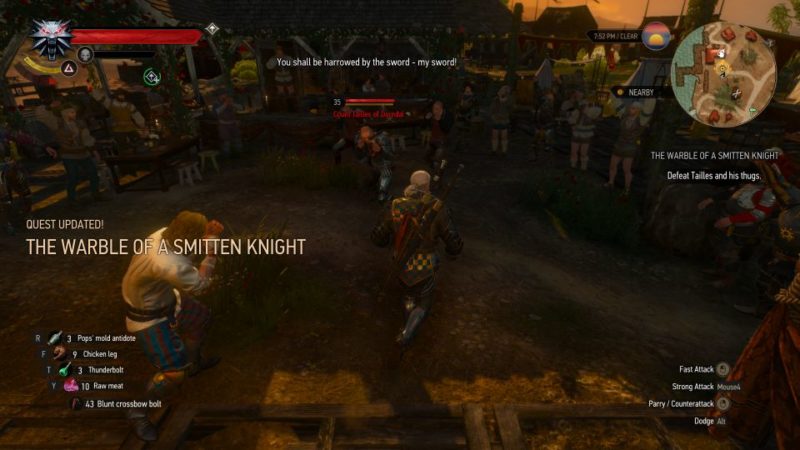 Next, look for Vivienne at her tent. 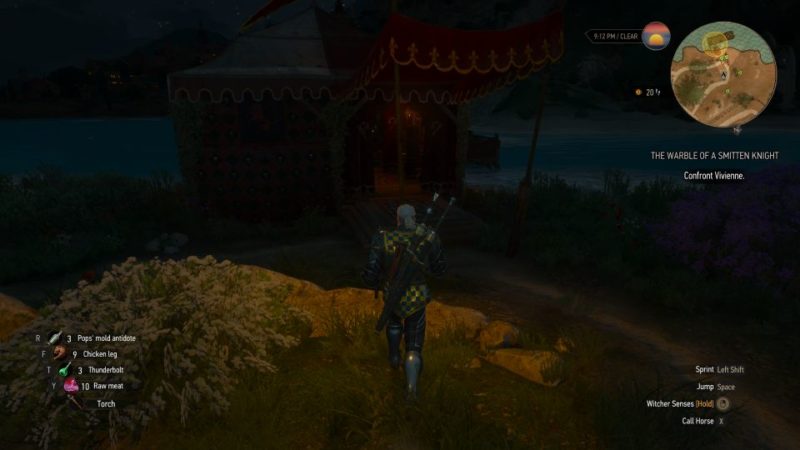 You won’t find her but Geralt will notice a bird. Follow the bird all the way. 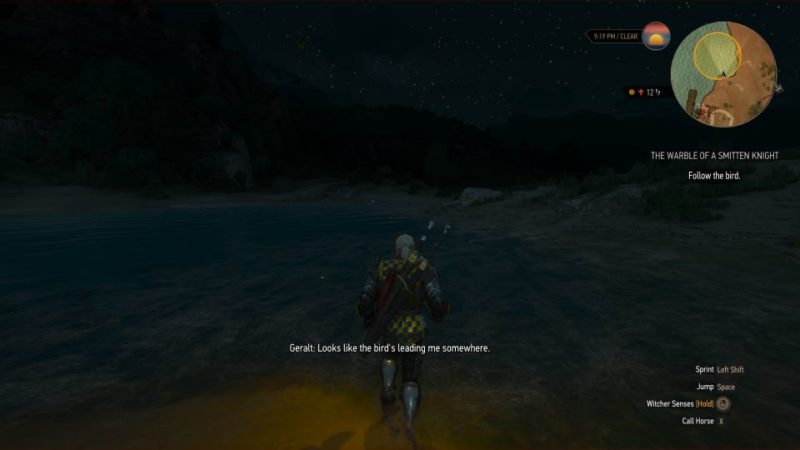 Along the way, there’ll be panthers. 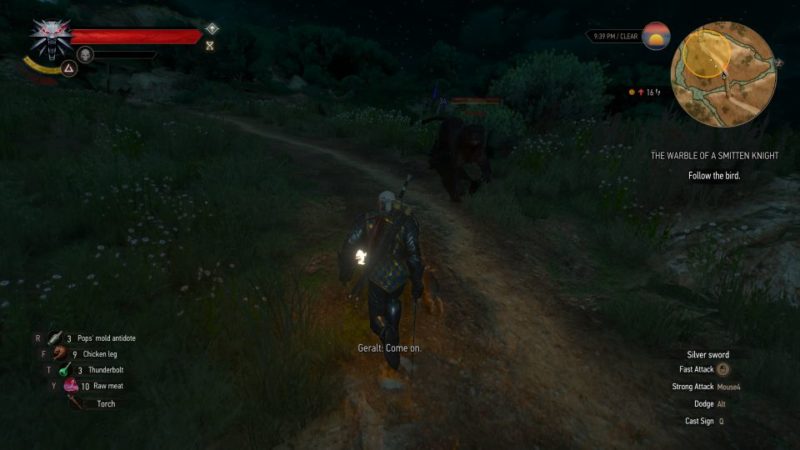 At one point, the bird will fly across the cave. Going through the cave is a shortcut but there are monsters. 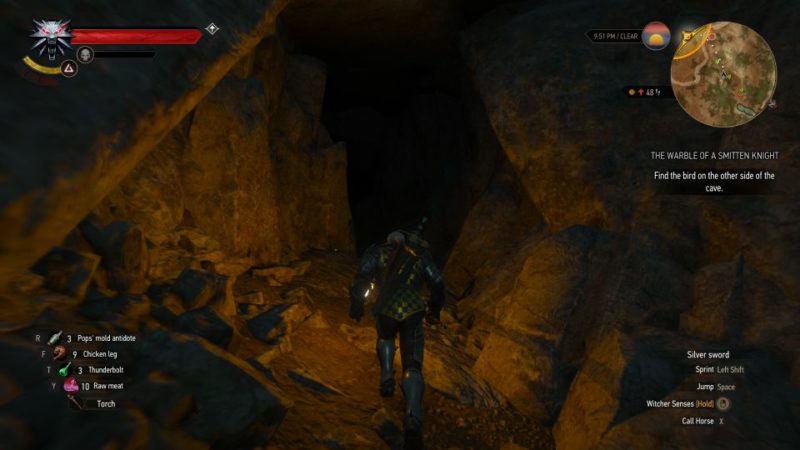 Take out the wight. 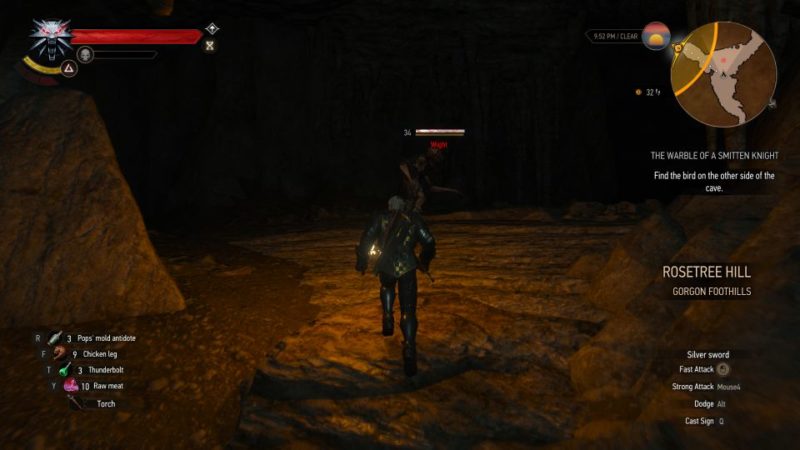 After exiting the cave, a cutscene will trigger.

Turns out, Vivienne is half bird due to a curse. 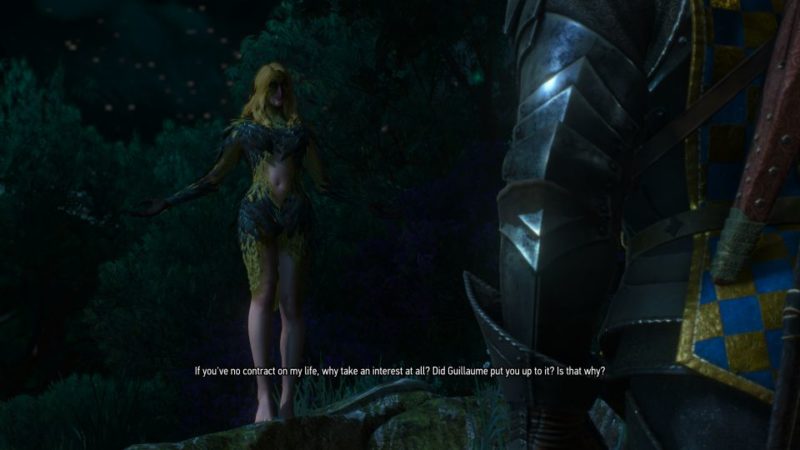 Geralt will then agree to lift the curse for Vivienne. 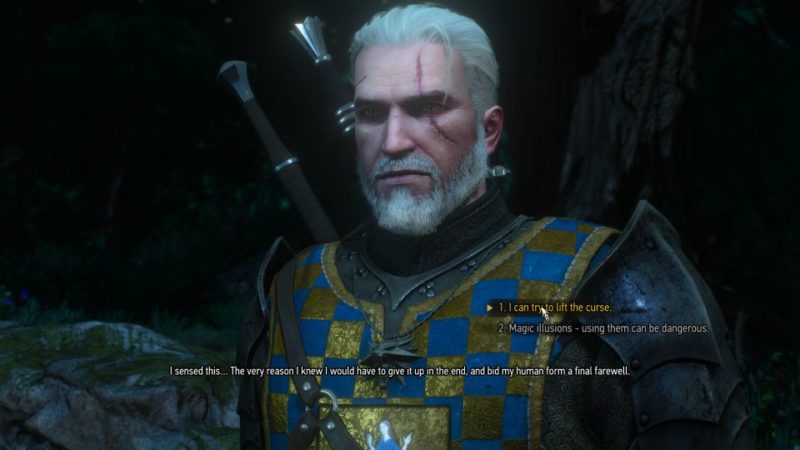 Tell Guillaume or not

This part affects the ending.

If you do tell Guillaume, you get an option to choose which way to lift the curse. If you choose the water method, Guillaume will end up persuading Vivienne to transfer her curse to him. He will become cursed with the bird affliction and they live together in the end.

If you choose not to tell Guillaume, Vivienne will end up lifting the curse, but in return, her life span is reduced to 7 years at max.

It really depends on which ending you prefer. 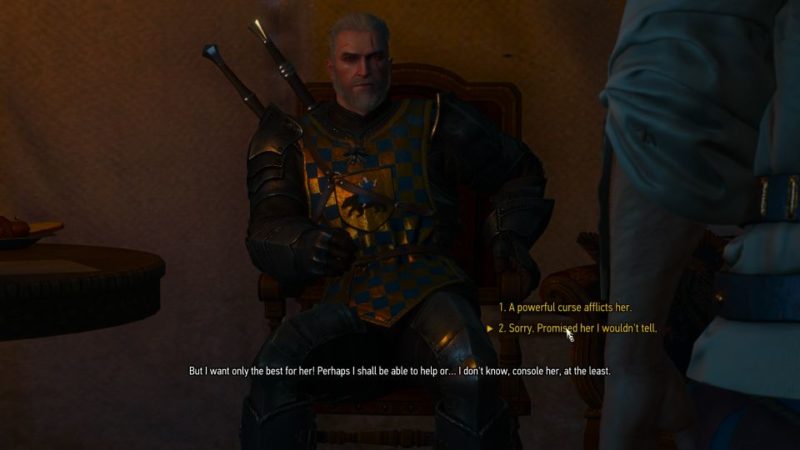 Carry on with tourney or not

Carrying on with the tourney shouldn’t affect Vivienne. You will get a chance to win the entire tourney.

You can still help Vivienne after the tourney. 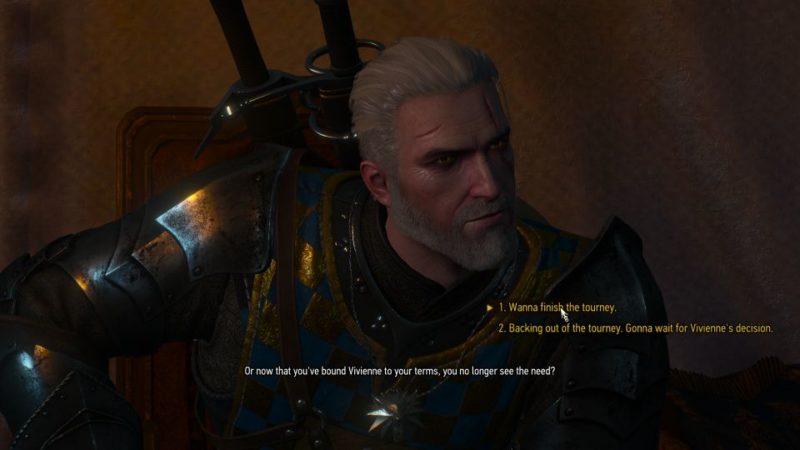 The first part is a team match. You have to defeat the opposing team. 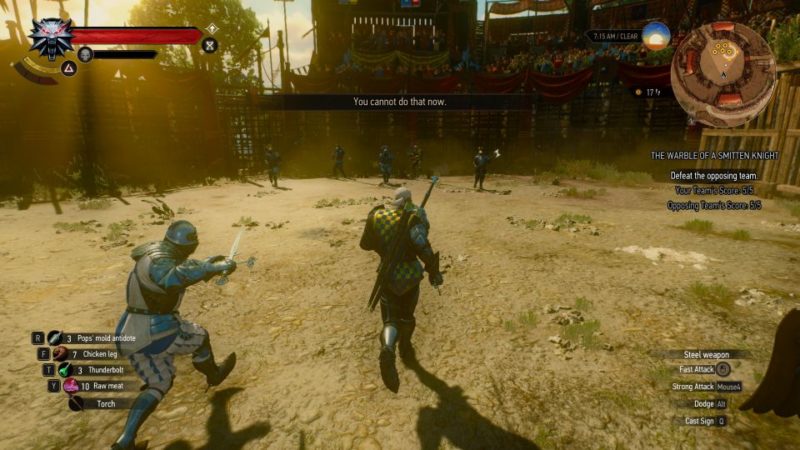 After winning the team battle, you’ll be faced with Gregoire, the past champion.

He’s much bigger in size and is pretty hard to fight, considering you can’t even use Signs. 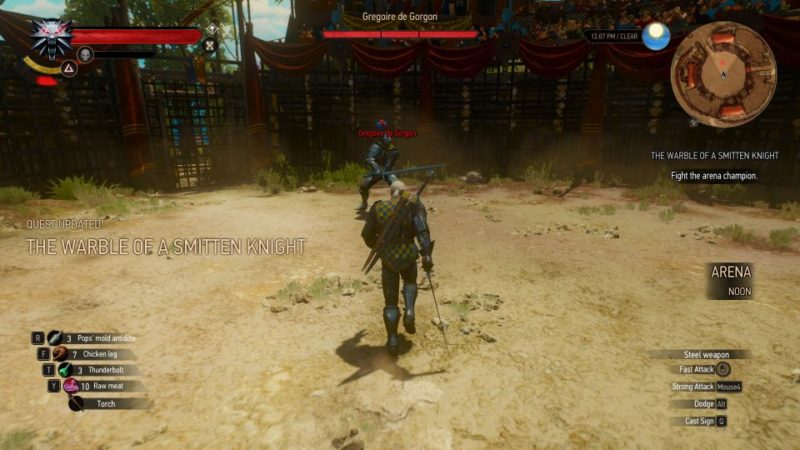 You’ll need to keep dodging to attack him.

If you had chosen the egg method, you’ll go to the glade with Vivienne alone.

She’ll turn normal and will be happy that she has 7 years for a normal life. She chooses not to thank Guillaume personally and doesn’t want to be involved with him.

If you chose the other method, Guillaume will be transferred the curse, and the both of them lives together in the end. 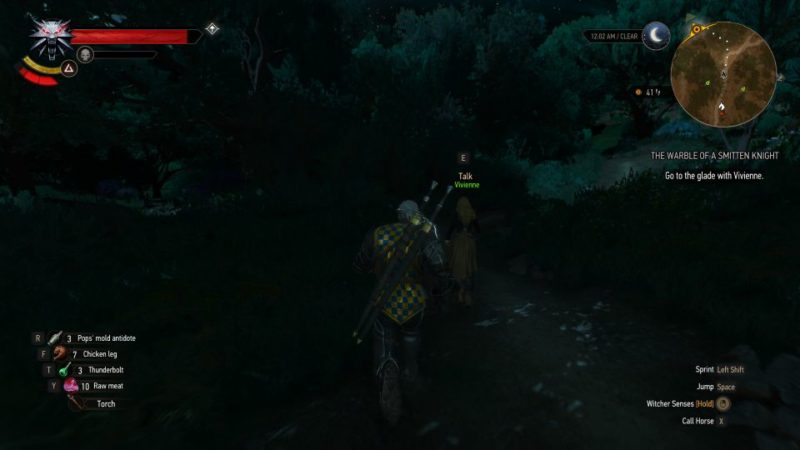 The Man From Cintra: The Witcher 3 Walkthrough And Guide

Lord Of The Wood: The Witcher 3 Contract Walkthrough