The newest DLC named Re:Mind has finally released and it’s a continuation of Kingdom Hearts 3.

This walkthrough covers the introduction, Keyblade Graveyard and Skein of Severance | Trail of Valediction.

Here’s a walkthrough of the first part of Re:Mind DLC in Kingdom Hearts 3.

How to begin playing Re:Mind

To start playing the game, just head over to the in-game menu of Kingdom Hearts 3, provided you’ve downloaded the DLC.

Choose “downloadable content” and the story begins from there.

The intro is pretty long. You’ll see a conversation between Luxord and Zigbar first. Luxord knows that Xigbar is looking for something else.

He, however, pretends not to know about it. Xigbar is curious as to who Luxord actually is. 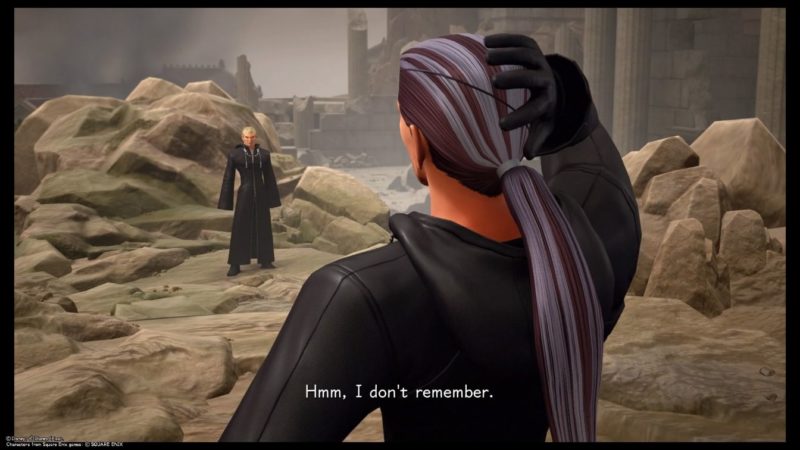 You’ll then see Sora speaking to Chirithy before he looks for Kairi. 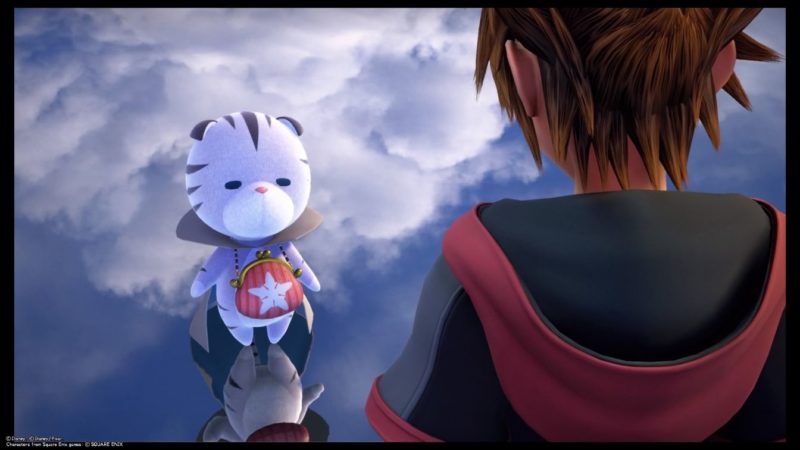 After the long and confusing cutscenes, you have to defeat the Heartless. It’s the first battle of the DLC. 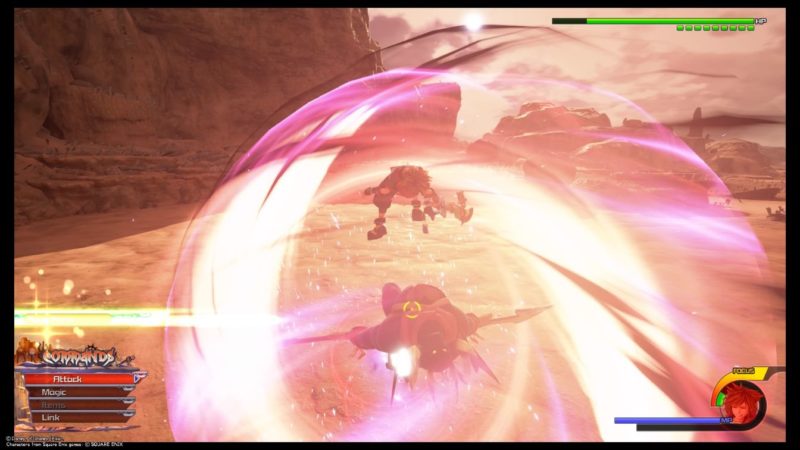 The fight is straightforward. 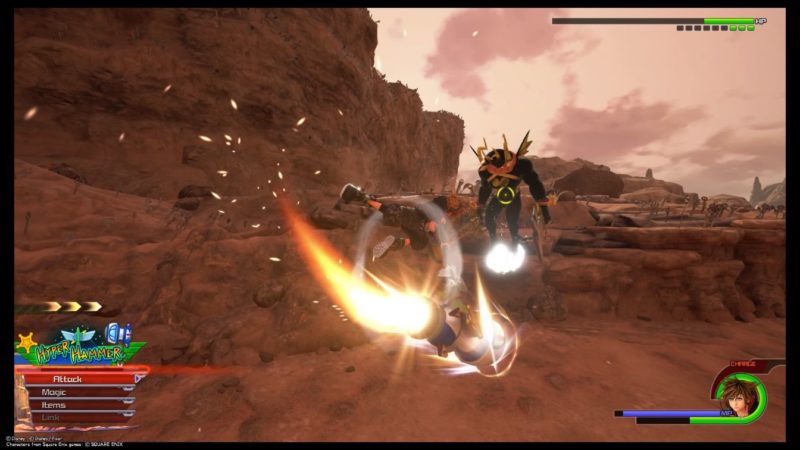 Most of the story in this DLC has already been shown in the main game. They’re replaying most of the parts.

After Aqua was taken by the darkness in the Keyblade Graveyard, Sora will feel what she’s feeling (despair and fear).

You then have to defeat Anti-Aqua. 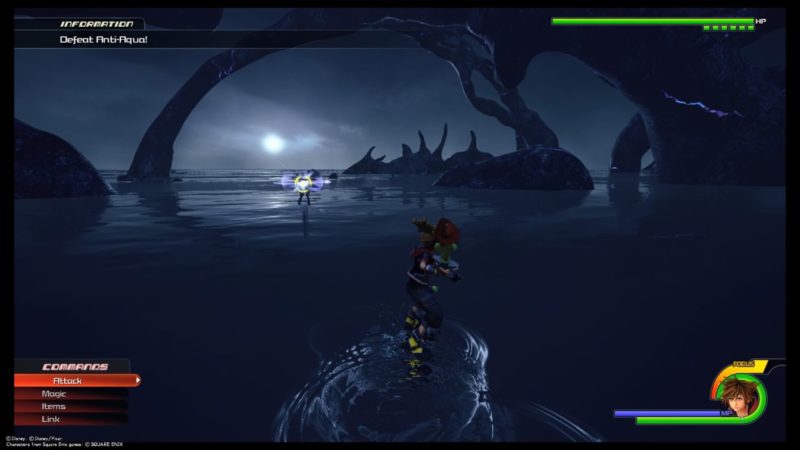 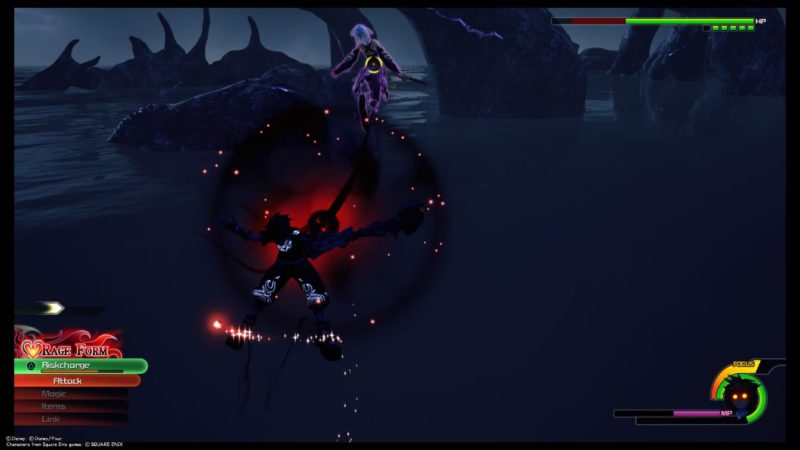 After that, more cutscenes will appear. You will meet Namine in this other world. 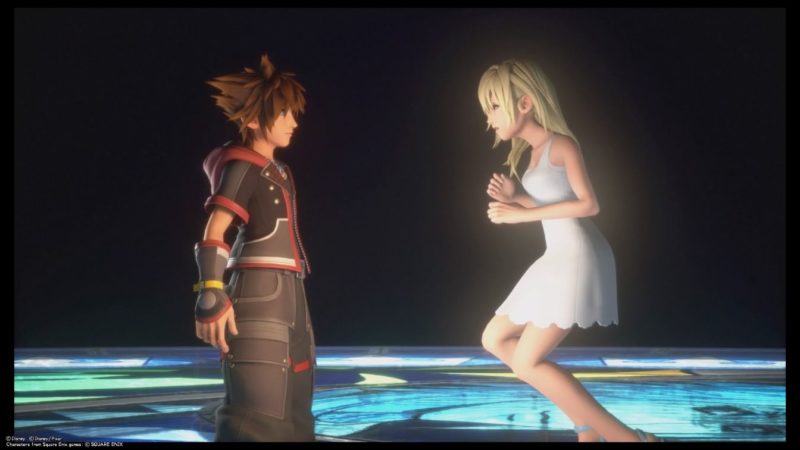 You’ll then be back to the scene where Terra was fighting his (thoughts?). 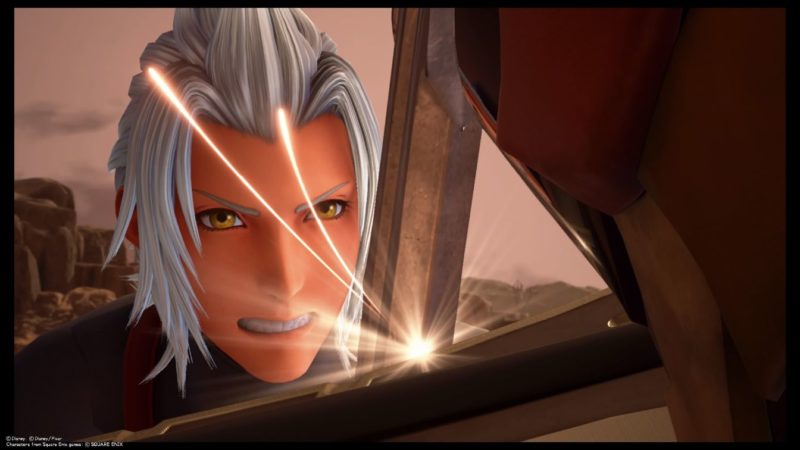 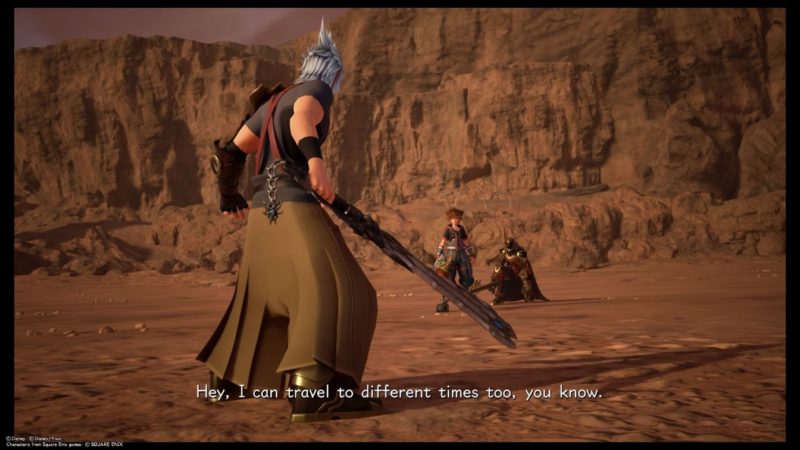 After the cutscenes, you need to fight Terra-Xehanort. 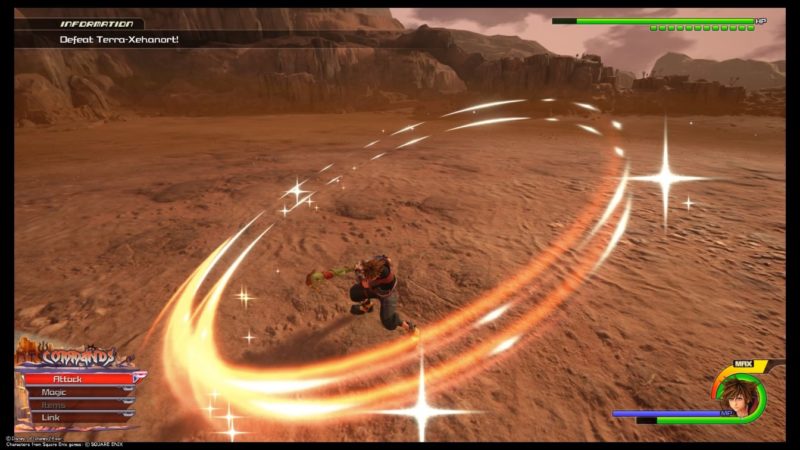 As usual, try to utilize your link commands whenever your health is low. It helps regenerate your health and also cause bonus damage to the enemy. 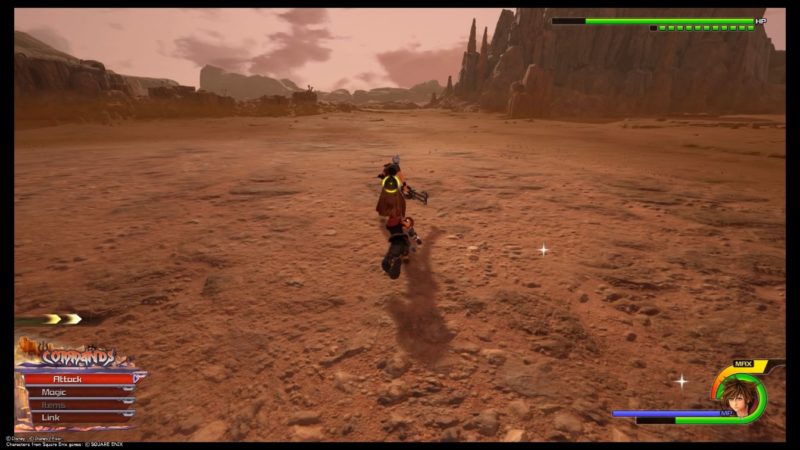 The Skein of Severance | Trail of Valediction

You will now reach the next part of the story.

Proceed into the labyrinth

This one’s the same as the story in Kingdom Hearts 3’s main game. Save the game first and remember to restock your potions.

Get a Kupo coin if you don’t have any. 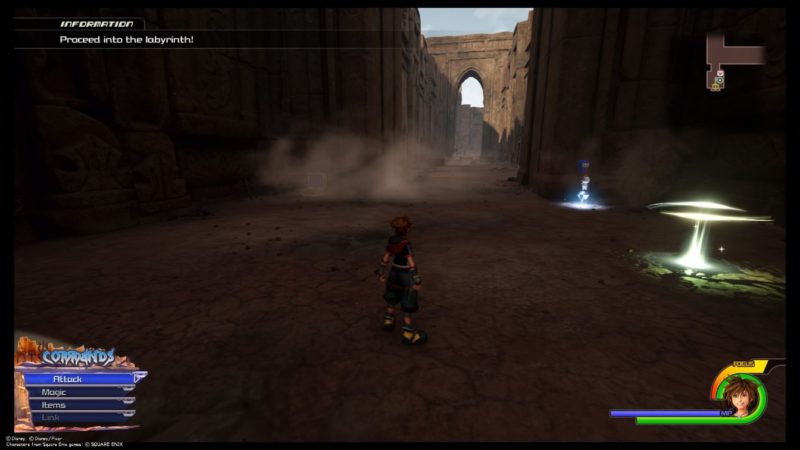 Also, when you use the Moogle Shop, you will automatically trade the “Proof of Promises” with the new keyblade “Oathkeeper”.

It’s a keyblade focused on the ‘light’ element and comes in handy. 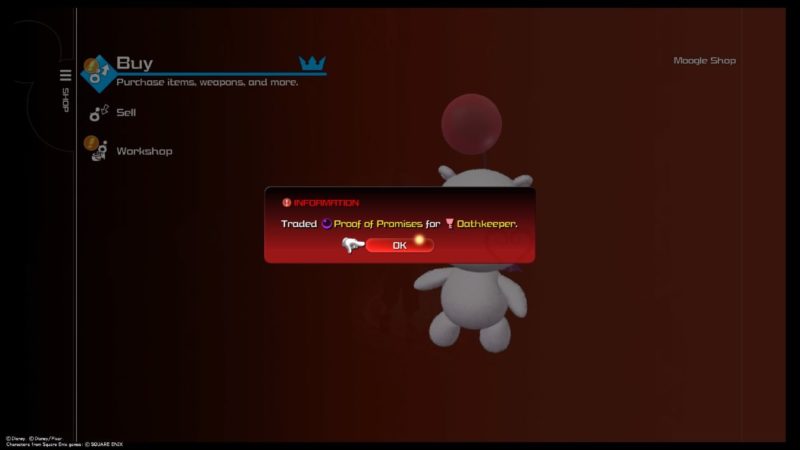 You may want to use it. It’s pretty damn good among the keyblades. 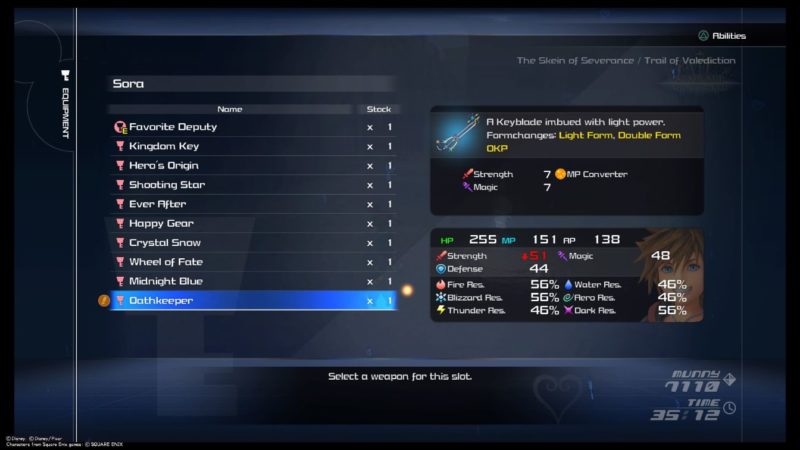 Once again, you can choose which Organization members to fight with first. There are two paths. Go to any.

The first room we chose was Luxord, Larxene and Marluxia.

The gameplay here is the same; just defeat them. 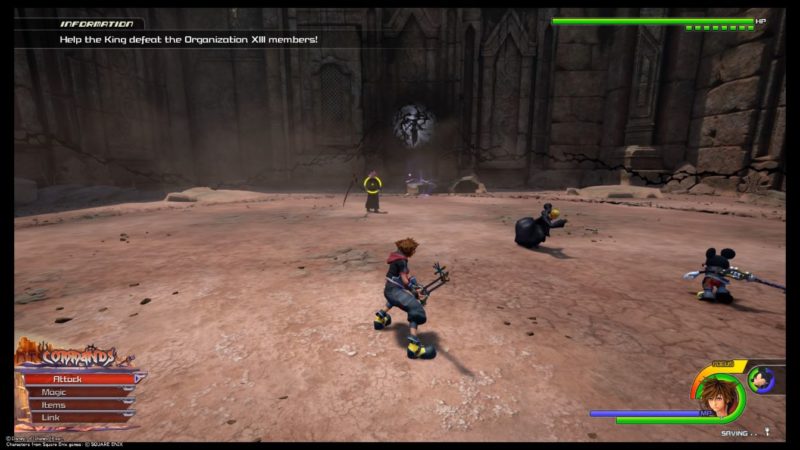 After some time, Luxord gets extra powers from Xemnas and plays a card game with you. 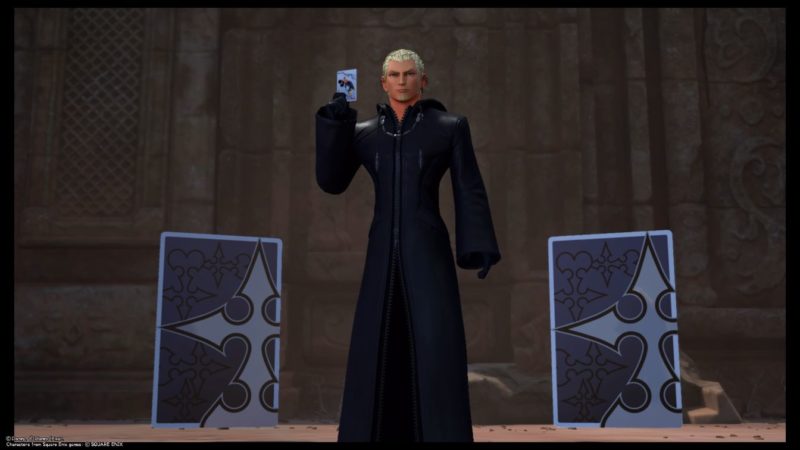 To defeat him, just destroy all the big cards. Luxord’s hiding behind one of them. Attack him when he’s found but he will hide behind a card again. Repeat the process until he loses.

You can just ignore the other two members first. 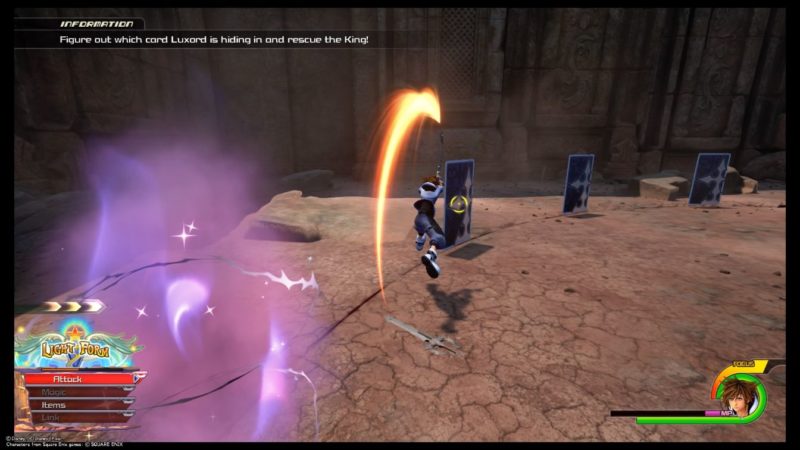 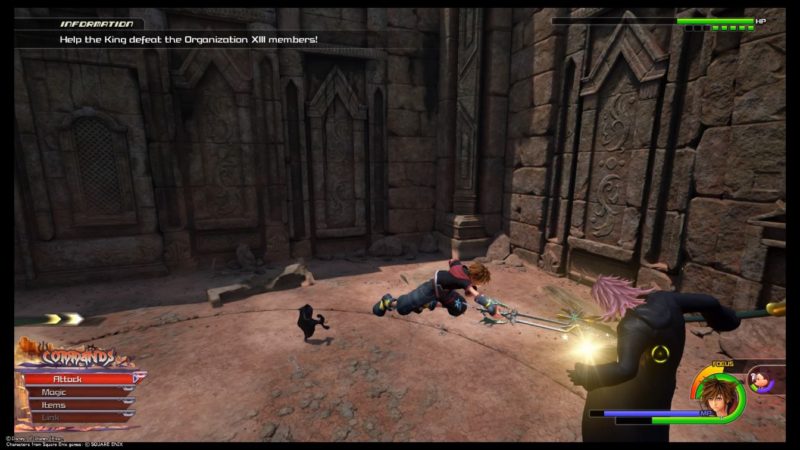 Next, help Riku. This is the first time you can choose between Riku and Sora.

With either of the characters, defeat both evil Riku and Xigbar.

In the next room, you’ll play as Aqua first. Keep hitting the members of the Organization until the cutscene is triggered.

After Sora appears, you can choose to play with Sora or Aqua.

Next, you’ll enter the room with Saix and Xion. On your side, you have Axel and Kairi.

Keep fighting until the cutscene is triggered.

You will see Sora speaking to Roxas.

Roxas needs Sora’s help to get the ‘connection between the 3’ back.

Xemnas then captures Sora and Kairi. Xion got back her memories and joins your side.

Roxas then appears to stop Xemnas before he got rid of Sora and Kairi. Here, you can play as Roxas to defeat the Organization.

After Xemnas is defeated, the symbol that connected Axel, Roxas and Xion came back. It’s an “X” symbol from the previous game.

Xemnas then leaves, taking Kairi with him.

Playing as either Roxas or Sora, you need to defeat the berserk Saix.

The last part of the battle is also the same as in the main story. Climb up the Tower.

You’ll meet the King and Riku.

Together with the other two, defeat Xemnas, Ansem and Young Xehanort.

The easiest way is to use your link command whenever possible. Remember to have potions in your item menu and also equip curaga / cura.

We prefer using the lion as a link command.

This part of the DLC Re:Mind ends here.