Ghostbusters: Spirits Unleashed is a new game by Illfonic studio.

It’s basically a 4 vs 1 game where four players will play as busters as they attempt to capture the ghost which is the fifth player.

The ghost’s job is to haunt the place, protect the rifts and avoid being captured until the building is fully haunted.

Here are some beginner tips and guide for Ghostbusters: Spirits Unleashed.

Beginner tips and guide as a ghost

If you’re playing as the ghost, your job is to get the building haunt bar at the top of your screen to 100%. Once it hits 100%, there’s a short amount of time for the ghostbusters to capture you. This is to give them a chance before it ends. 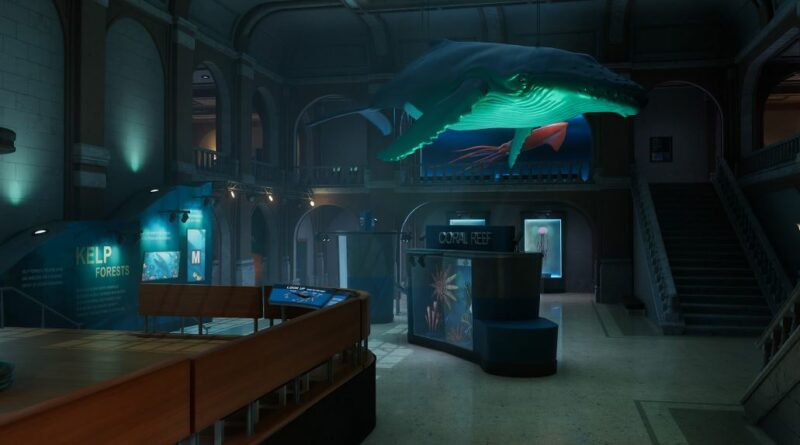 To increase the building haunt, you can haunt as many objects as you can find. In each building, there are many rooms or areas. Rooms that are small are naturally easier to fully haunt as there are less objects. Once the room is fully haunted, you should see some visual changes like slime on the wall or the place will overall look rotten. 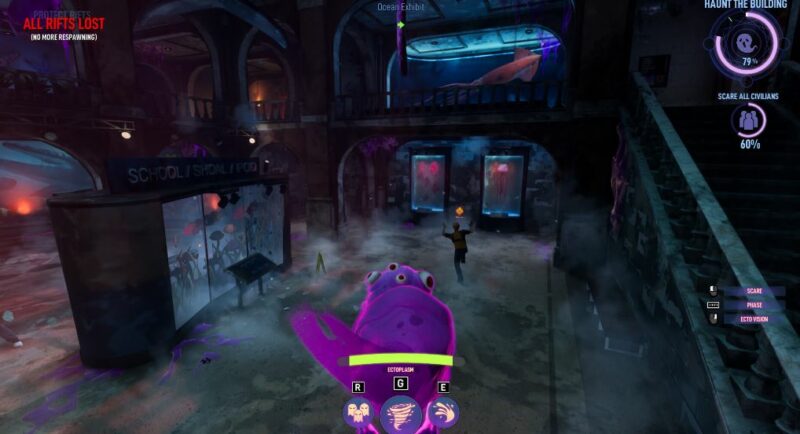 Other than haunting objects, you can also haunt civilians by attacking them. When civilians flee the building, you should increase the building haunt percentage.

As a ghost, you can also possess items. It’s sort of like Prop Hunt. You can enter objects and use them to go around. Using objects will also regain your energy. When escaping from busters, you should use objects to hide and sometimes they don’t know where you went. You will also use up a lot of energy when trying to escape their proton blasts, which is why possessing objects will be required to gain energy.

Another objective for ghosts is to protect rifts. You’re given three rifts per game and you’ll know where they are as a ghost. The rifts are hidden in objects. Your job is to prevent busters from destroying all of them. When you get captured, you also lose a rift. If they’re all gone, you can’t respawn when you get captured. Rifts can also be used to teleport from one place to another. You will be able to move rifts away but you have to be sure that busters aren’t seeing you do it. When rifts get attacked, you will be notified on the screen and should go to the location to protect it by moving it away. Protect as many rifts as you can because when the building haunt is 100%, you will be given over a minute to survive. Each rift you have left will deduct the time for survival; making it easier for you. 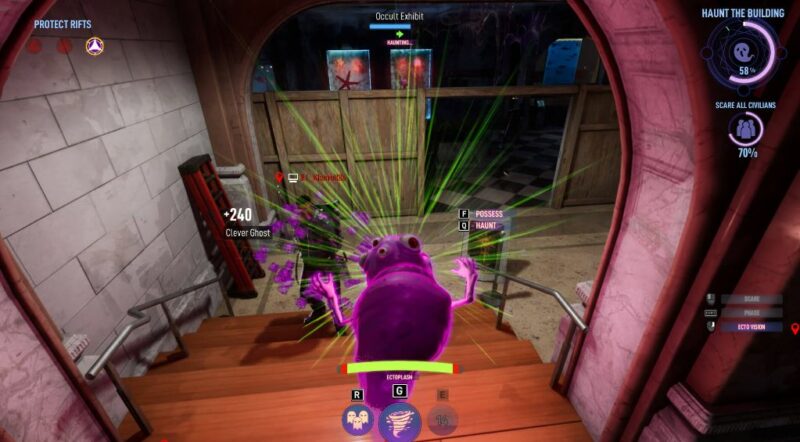 How to slow down busters

Ghosts can’t kill busters but can slow them down. There are a few ways to do so. Each ghost has its own ability that will slow down players like throwing slime. One of the best delaying methods as a ghost is to disable the buster’s pack. You have to stand behind the player while doing so.

These are just some basic tips on how to play as a ghost in Ghostbusters: Spirits Unleashed.

Beginner tips and guide as a ghostbuster 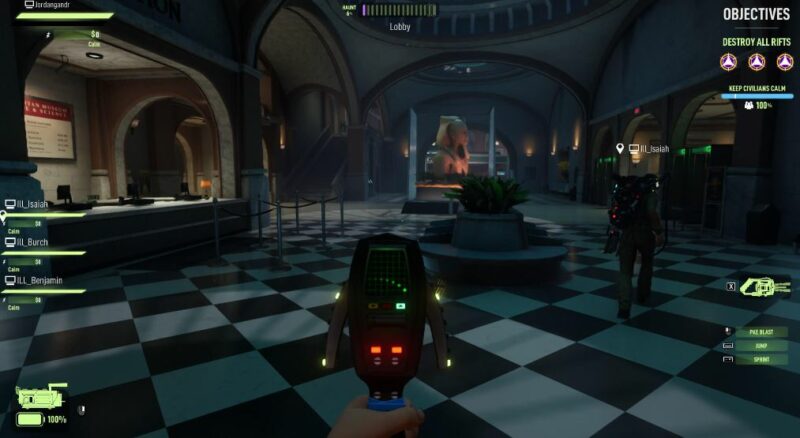 As a buster, your job is to destroy all rifts and capture the ghost.

Destroy rifts and capture the ghost

There are three rifts for you to destroy. To find rifts, you have to use your PKE meter which is the psychokinetic energy meter. The rift will be hidden in an object and you will see it when you destroy the object. The ghost however will be notified when the rift is being attacked so you have to anticipate getting attacked while the ghost moves the rift away. Get ready to throw your trap near the ghost and use the proton blast to bring the ghost to the trap. The more players coordinating the attack the stronger. 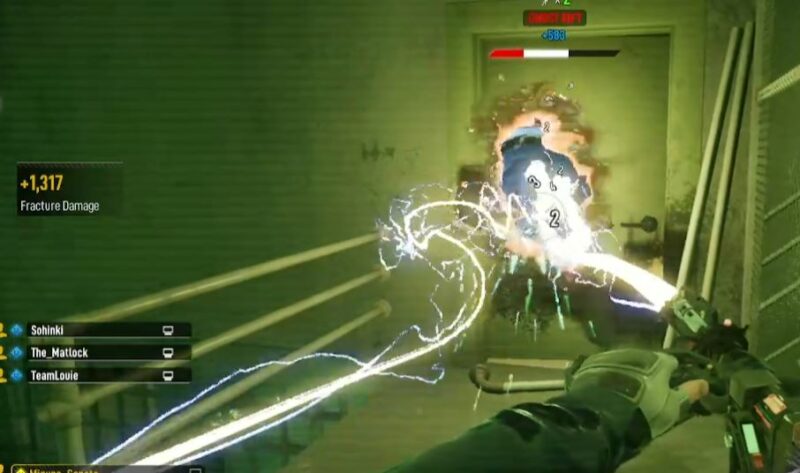 Apart from using the proton weapon, you can also use your PKE meter to activate a trap when the ghost is near you. It will stun the ghost for a few seconds, giving you time to set the trap and shoot the ghost. 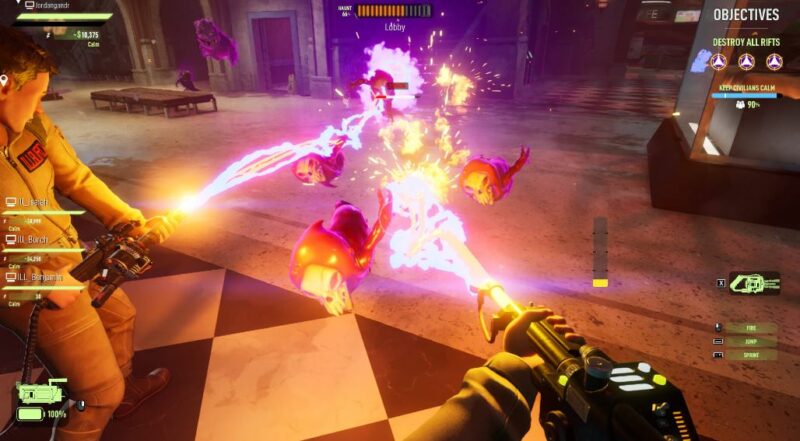 The bots in this game are also quite useless so the experience is so much better if you have friends or even play with random players. You will need to coordinate your attacks again the ghost or it’s going to be extremely tough to win. The ghost has many more abilities to use and can flee faster than humans.