Warhaven is a 32-player game that was just released by Nexon hours ago.

There will be 16 players on each side and there are different game modes to choose from. You will begin from the standard mode.

Here’s a guide and some basic tips for beginners in Warhaven.

Use the boot camp 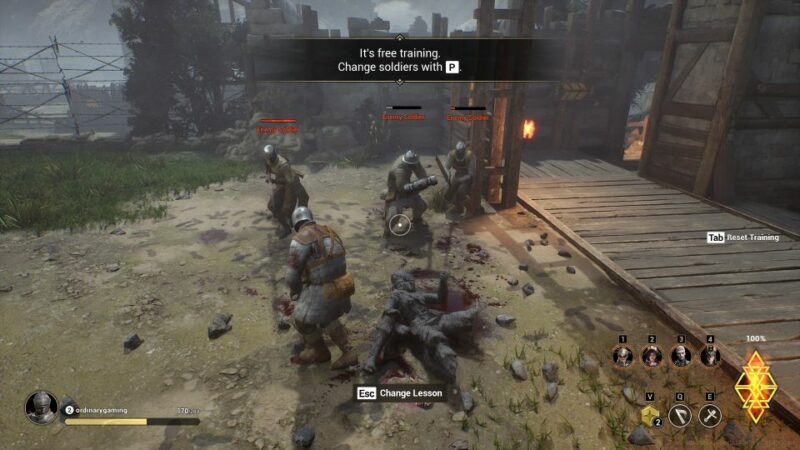 The boot camp is easily one of the most important features of the game for newbies. It allows you to practice every single character in the game, including Immortals. Immortals are the reincarnated forms of the regular characters. There are four Immortals at the moment and you can choose anyone of them to reincarnate to during a standard game.

Use the boot camp to learn every single move each regular character and each Immortal has. You’ll learn the different attacks, how to block and the special skills which are Q and E. Each character has its own unique ability.

Blade is the standard melee character that specializes in frontal combat as a swordsman. You have the Warhammer character for slow but strong attacks, Arch for ranged, Smoke for healing, Guardian for shield capabilities and so on. Learn each character’s moves and choose one you like to play as.

Remember to reincarnate into an Immortal 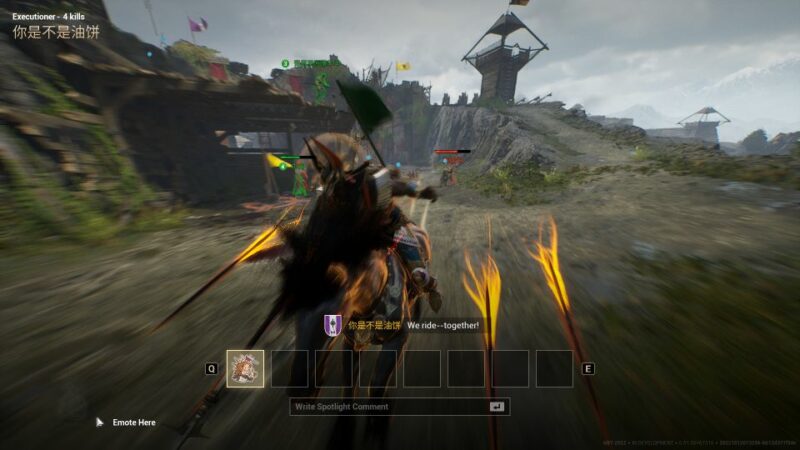 During each game, you will see a yellow symbol on the bottom right of the screen.

When it gets to 100%, you’ll be able to reincarnate into an Immortal which is a stronger character.

Just press 1 (Martyr), 2 (Raven), 3 (Hoet) or 4 (Darkgale) depending on which Immortal you want to play as. They all have their strengths depending on the situation.

Each character has its role

As mentioned many times above, every character is unique. 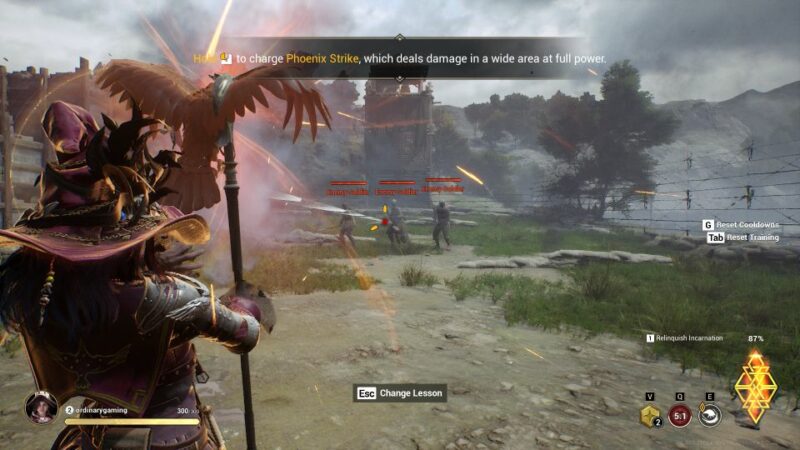 When playing a standard game, try to have a balance.

Instead of everyone just playing as Blade, maybe have a healer like Smoke or a shield like Guardian to balance the team composition.

If you look in the menu, there’s a Barracks. Enter the Barracks and you’ll see all the heroes / characters.

You can actually level the heroes you like to play as. If you love Blade, you can level it up and each level will give you rewards.

Some of the rewards are actually perks that will enhance your character’s ability during the game, such as increasing sprint speed for a short duration. 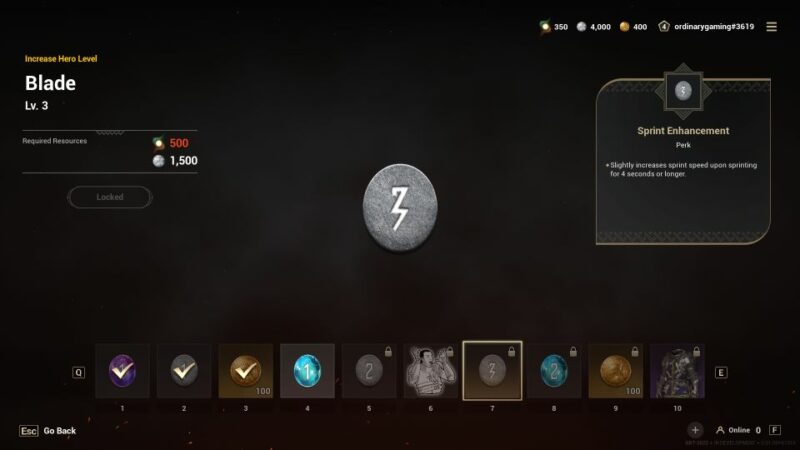 Player score is not based on kills alone

In each game, you will have a player score at the end whether you win or lose.

The player score isn’t based on how many kills you’ve made alone. You can get a high player score as a healer if you make tons of heals too.

Depending on which map you got, you will get access to certain war weapons. One of them is the cannon.

It’s a long ranged attack and it’s great to kill a big number of enemies when they’re centered around a flag point.

Remember to use them when necessary. 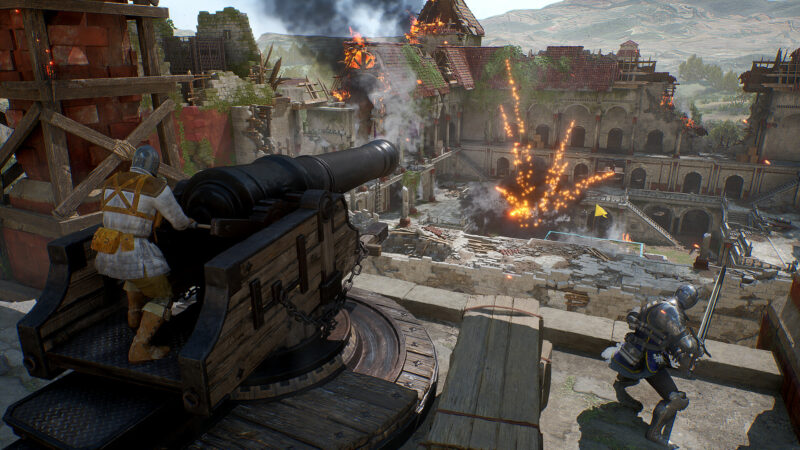 There are daily and weekly tasks to do if you look under the Challenges menu in the lobby.

You can replace the challenge if you find it too difficult. Completing them will give you XP.

Challenges are like defeating a number of Immortals daily, killing an enemy as a specific character and performing a certain number of kills in a single match. 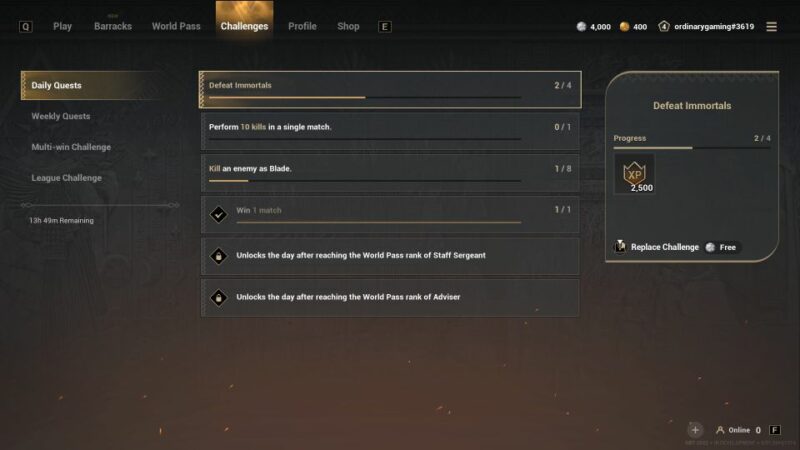 There’s also a World Pass feature in Warhaven. If you look in the menu, you can level up your World Pass as you play more games and get more XP.

You will get World Pass rewards like gold coins or cosmetic items as you level up your World Pass. 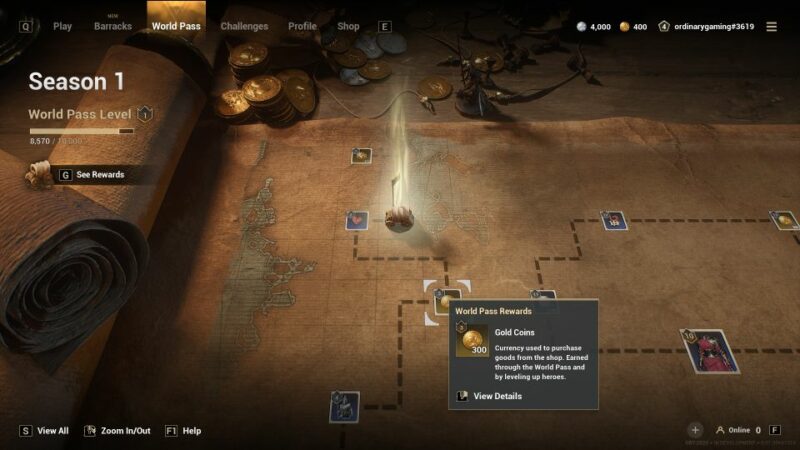 Although Warhaven is a 16 x 16 game, there are also squads.

Each squad has four people including yourself and if you randomly match with others, you will be automatically paired with three other squad members.

You may want to read more on Squad Support in the Warhaven guide in-game. There are squad medals, spawn rings, spawn tents and frostlocks.

Spawn rings allow dead squad members to spawn at your location. It may help a lot when you’re trying to push into the enemy’s area. Spawn tents are tents you place that allows you to spawn there.

Frostlocks can be used to freeze the capture points for a small duration to block the enemy from advancing. 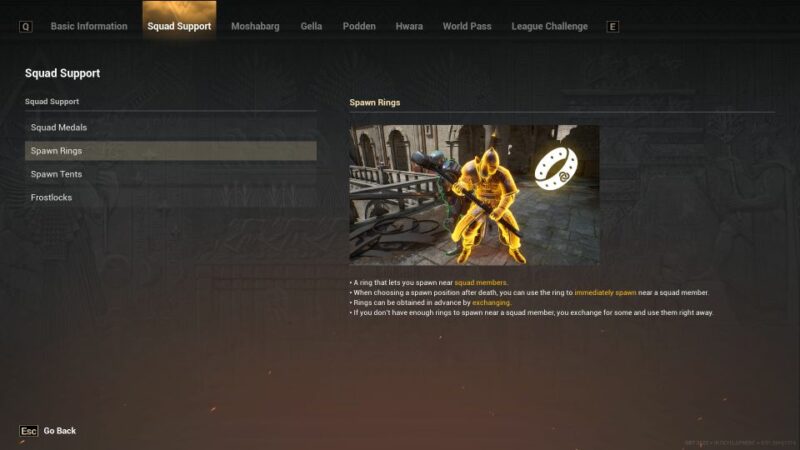 How to win the game

To win the game, you basically need to deplete the other team’s military strength to zero.

Once the other team reaches zero, the game ends and your team is victorious. To deplete military strength, you can hold more footholds (capture points).

Each map has its own rules and you can read them in the in-game menu guide. 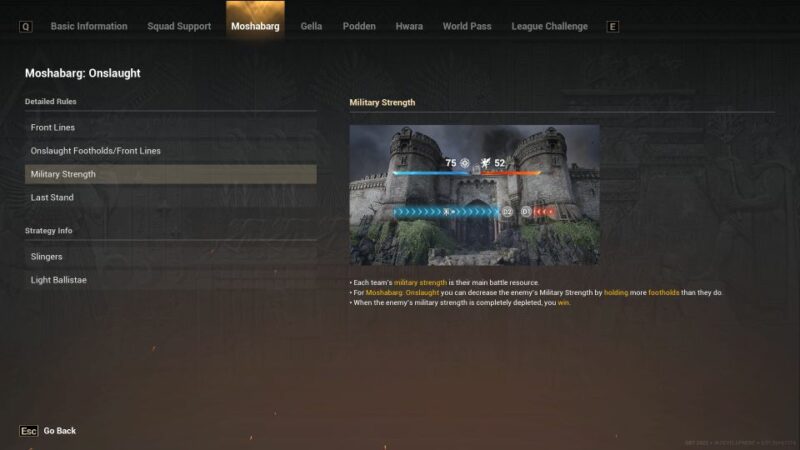 Fear Therapy: How To Find The Graveyard And Use Blood Vials