Everyone knows that the theme song is just as important as the show itself. In fact, even in a generation mocked for its short attention span, most audiences will happily hum and sing along theme song and watch it in its entirety before the show starts.

Below, we’ve rounded up the 10 best TV theme songs of all time. 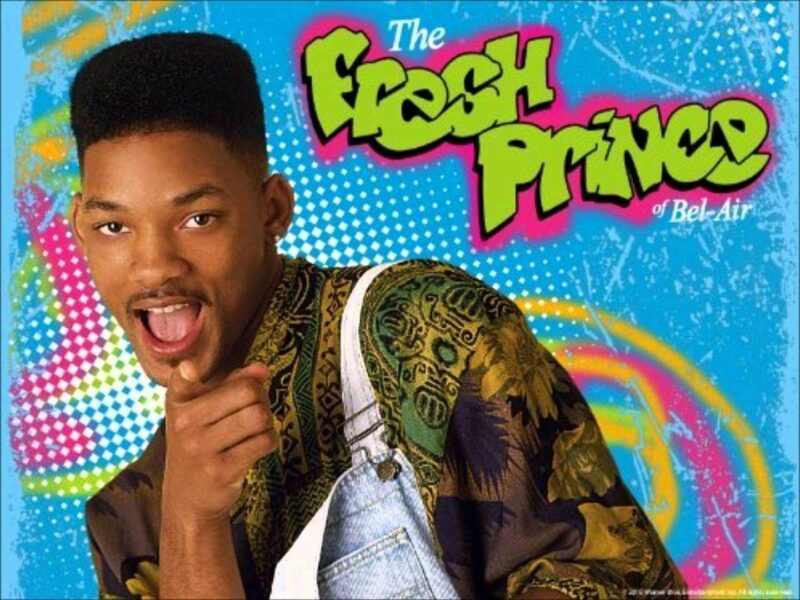 What’s a better way to start off a list of the best TV theme songs of all time than with arguably the best of them all?

To think that the song, formally titled as, “Yo Home to Bel-Air”, became this iconic is surprising, to say the least.

After all, Will Smith only agreed to star in The Fresh Prince of Bel-Air because he had been in serious debt to the IRS.

To think that we wouldn’t be treated to this show and this theme song if The Fresh Prince had kept up with his taxes better. 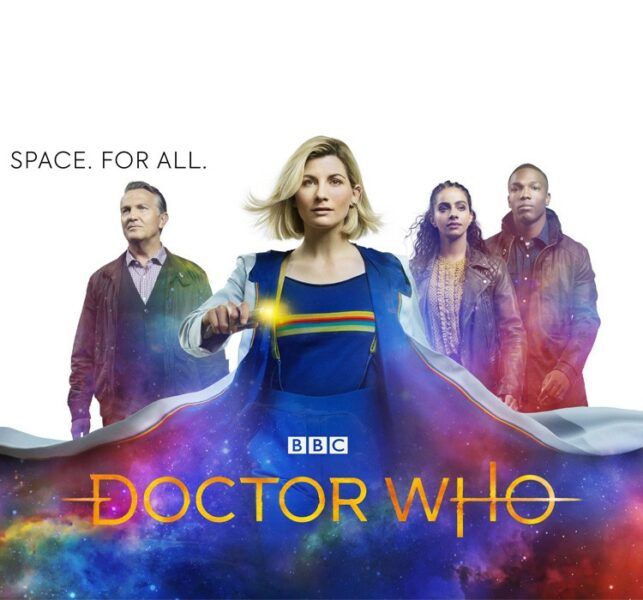 Doctor Who is one of the few shows on the air right now that was just as loved by its generation as the current generation.

A BBC mainstay for more than two decades from the 60s down to the 80s, Doctor Who took a two-decade hiatus before returning full-time in 2005. However, despite an ever-changing cast of characters, including the titular protagonist, the Doctor Who theme song, simply titled “Doctor Who”, has remained the same.

Ron Grainer and Delia Derbyshire, who arranged the original theme song, continues to haunt airwaves today just as it did back in the early ‘60s. 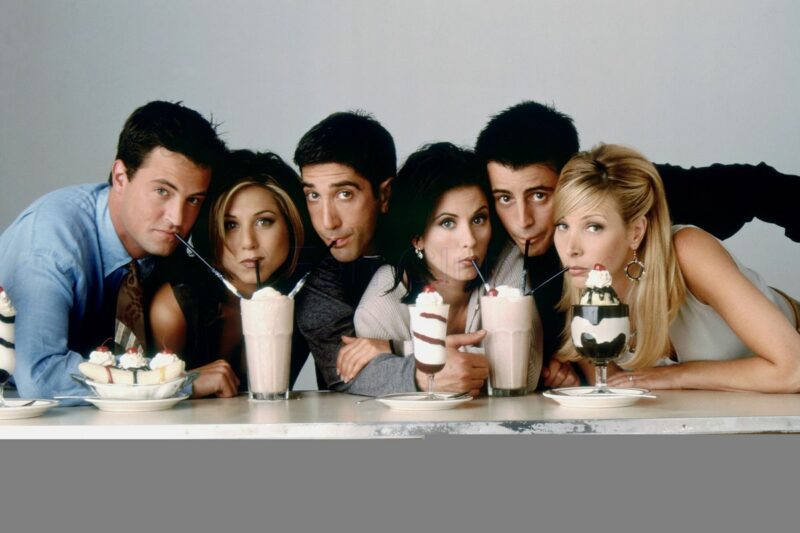 Friends just isn’t the same without their theme song, “I’ll Be There for You” by the Rembrandts.

However, did you know that this almost wasn’t the case?

Apparently, the brains behind the song, Phil Solem and Danny Wilde, had only recorded the original version of the song as a work for hire. It was merely 45 seconds. Instead, their focus was on their budding careers, which, by then, was highlighted by the Top 15 hit single, “Just the Way It Is, Baby” and a pair of albums with a third one on its way.

With Friends taking off almost immediately after it went on air, a Nashville radio station decided it was a good idea to create their own edit of the song and play it on air based on looped audio from the opening credits of the series and, well, it worked.

This prompted the showrunners to pressure Solem and Wilde to create an “official” version of the song, which they did.

Unfortunately, this all affected their third album at the time and the duo soon went their separate ways after this incident. 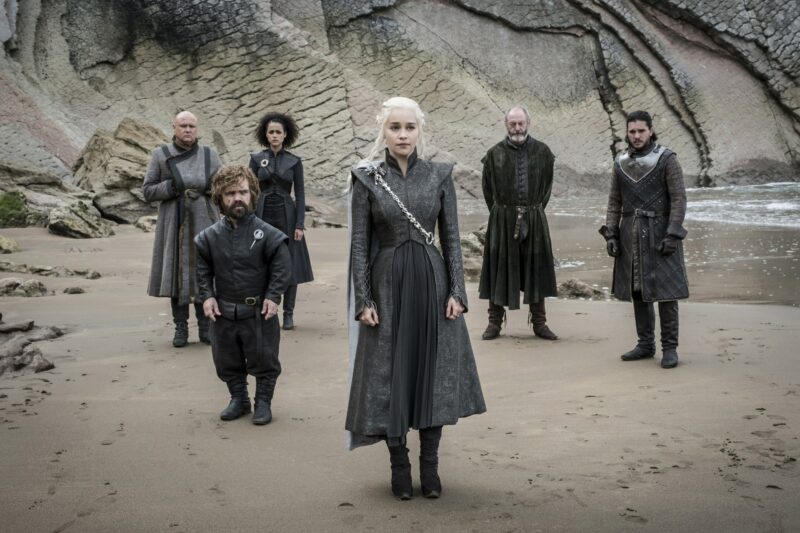 It’s amazing that Game of Thrones has all but disappeared from mainstream consciousness.

For the better part of the past decade, HBO’s epic fantasy drama was the talk of the town. Fans eagerly awaited every season. However, after a disastrous final season, hardly anybody talks about Game of Thrones anymore.

This is a huge shame. Because, for all its faults, the show’s theme song was absolutely perfect.

Nothing set audiences more for a full-hour of betrayal, love, dragons, and white walkers more than the main theme composed by Ramin Djawadi, as the intro sequence kept up and evolved to show key elements in the landscape that change within the show from one episode to another.

The prequel, House of the Dragon, is currently in the works. It’ll star Paddy Considine as King Viserys Targaryen and will follow the events that led to the rise and demise of the Targaryen dynasty.

Naturally, it’ll still be exclusive to HBO and HBO Max. However, what is uncertain if they’ll still use the same theme song.

Chances are, they won’t change it. The theme song is just so part of Game of Thrones that nothing else will probably ever top it. 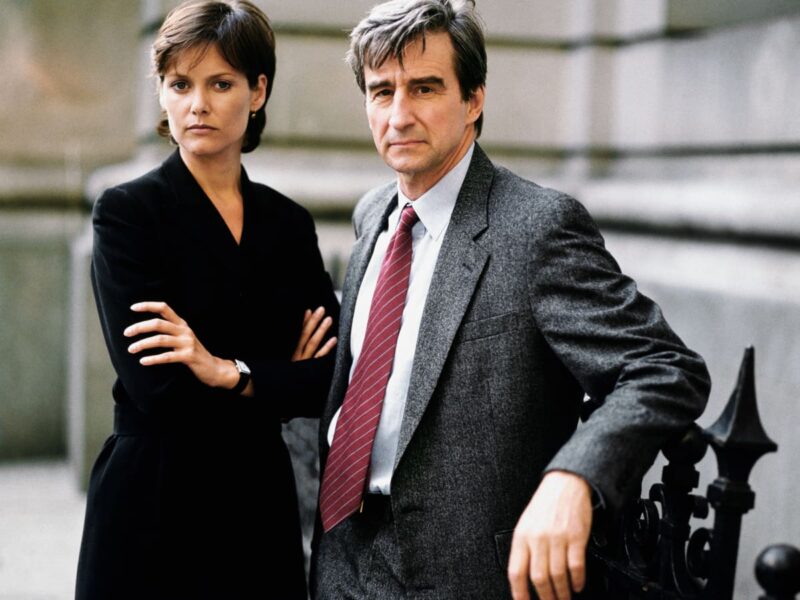 Most kids these days probably don’t know who Mike Post is. However, for those old enough to have lived through the ‘70s and ‘80s, the man was everywhere. He wrote one instrumental theme for a now-iconic TV show after another. This includes a long list of shows like Hill Street Blues and Magnum P.I, as well as The Greatest American Hero.

Still, as amazing as those theme songs are, Mike Post is probably best remembered for Law & Order.

The theme song, which was highlighted by what many fans have dubbed as “The Clang” has become a mainstay of the iconic franchise and has had a profound influence on the TV music landscape. 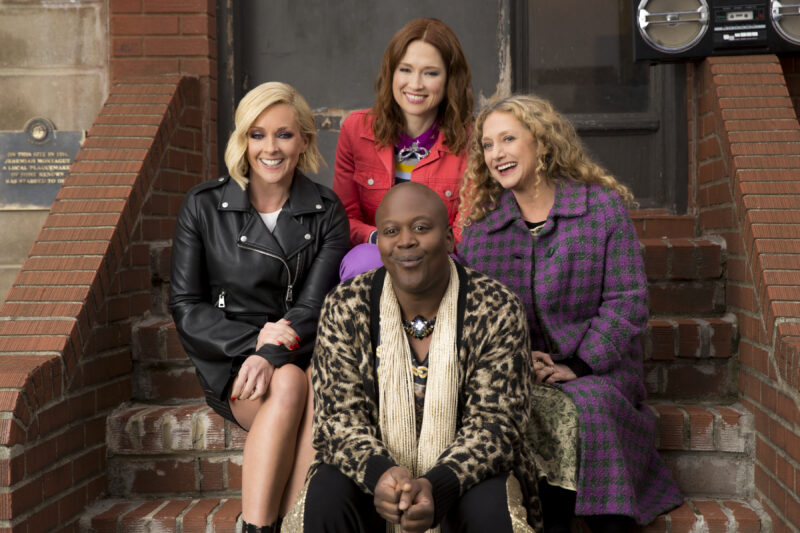 How do you create an upbeat theme song that so starkly contrasts that of a show whose premise is that of a woman who finds herself free from captivity after spending 15 years inside an underground bunker?

You don’t, right? You can’t possibly do it, right? Well, if it’s impossible, then you might want to refer to Jeff Richmond, the song’s composer, a miracle worker.

Teaming up with the Gregory Brothers, who were the silly brains behind the “Bed Intruder”, Jeff Richmond came up with a theme that, for some reason, makes it feel like it’s okay to watch a show with such a depressing premise.

It’s one of the best TV theme songs of all time. 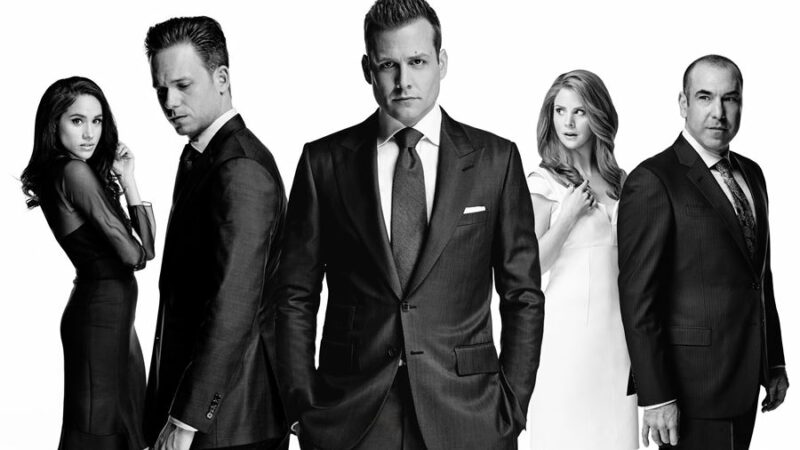 Some theme songs are made to encapsulate the message of its show, then there’s “Greenback Boogie”, performed by Ima Robot, feels like the show was made specifically to fit the message of the song.

Or, at the very least, that’s what the show initially started as.

Suits features Mike Ross, a Harvard drop-out who has an eidetic memory and through a series of rather weird events, finds himself masquerading as a lawyer and earning himself quite a bit of coin, under the tutelage of Harvey Specter, a lawyer at Pearson-Hardman, who claims to be the “best damn closer in town” in the city of New York.

The song’s message about earning more money no matter what is perfectly shown with Mike Ross pretending (successfully) as a lawyer before, in later seasons, it eventually catches up to him.

If nothing else, the song puts audiences in the mood for some lawyering that, admittedly, requires some degree of suspension of disbelief. 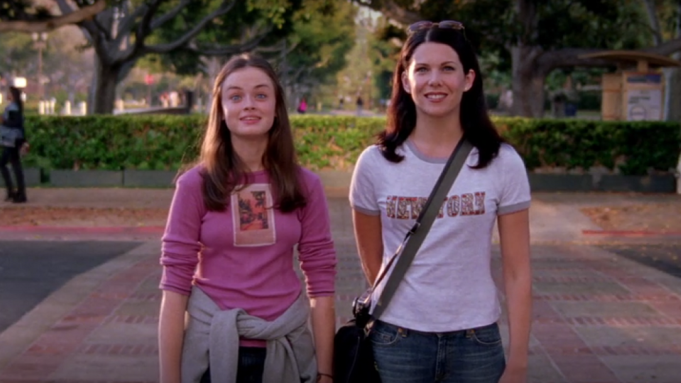 Lyrically revised and re-recorded by mother-daughter tandem, King and Louise Goffin, for the dramedy series, Gilmore Girls, “Where You Lead”, shows unconditional love at its finest and served complementary to the heartfelt banner that has become one of the best qualities of the show.

Unfortunately, today’s fans on Netflix won’t get a chance to hear it. The song didn’t quite make it to the Netflix revival.

Still, if you’re watching Gilmore Girls outside of Netflix, you’ll understand exactly how and why this theme song made it to our list. 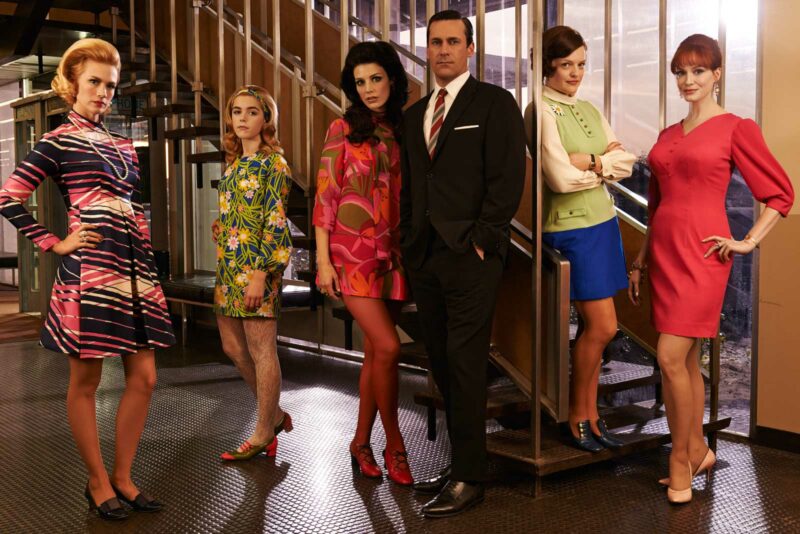 Making a theme song that captured the weird mix of dread and optimism that defined the ‘60s must have been difficult, but, somehow, the creator of Mad Men, Matt Winer, managed to pull it off.

Weiner was a very particular guy. He wanted everything done right, and when pitching a TV show about ad executives set in the ‘60s, he wanted it to be complete. This included a theme. However, instead of looking for a song from the 1960s, he opted for something more contemporary after hearing it on NPR.

Originally written by RJD2 and performed by rapper Aceyalone, the vocal-less reissue released in the same year was what got the Mad Men creator hooked.

Weiner tracked it down after hearing it, and, well, the rest, as they say, is history.

10. “The History of Everything” 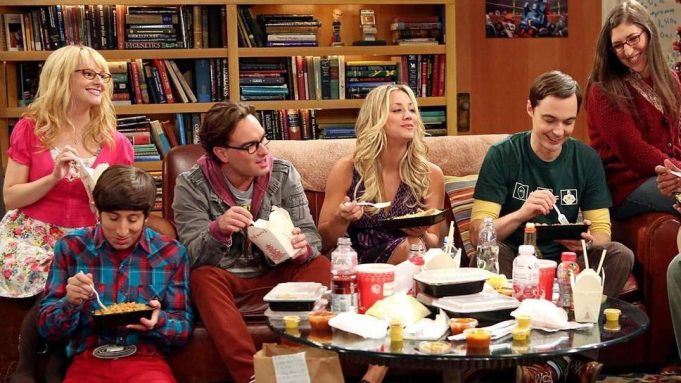 We’ll forgive you if you didn’t know who the Barenaked Ladies were. They were popular. At least, for a time. But, that was back in the late ‘90s and they were mostly popular only in Canada.

Barenaked Ladies’ best claim to fame back then was their song, “One Week”, which had a part in it that sung, “Chickity China, the Chinese chicken.”

In any case, popular or not, we can agree that the theme song to Big Bang Theory, aptly titled, “The History of Everything”, will be a much bigger hit than they’ve ever done and will likely give them a much bigger payday too, even after it has long concluded its 12-season run.

“The History of Everything” gives audiences a good idea about just how nerdy the show is, or rather was, as the show has deviated from its nerdy and geeky aspect in later seasons, but the theme song remains catchy and iconic either way.

Is it the theme song that makes the TV show or is it the other way around?

We don’t really have an answer to that question. However, what we do know is that these are the best TV theme songs of all time.

From sitcoms to dramas and even epic fantasy shows, these TV theme songs were partly responsible for getting viewers to pay attention to their respective TV series when they were first aired, and until today, as they act as a trigger for fans to reminisce the good old days when the show was still on the air.

The 10 Best Zombie Movies On Netflix

The 10 Best Fighting Anime Of All Time