The One Piece universe is home to a number of strong pirate crews traveling any one of the universe’s four seasons and over the Grand Line.

However, while Pirate Crews are dime-a-dozen in One Piece, only a handful are considered big enough of a threat that the World Government has no choice but to pay close attention to their movements.

As notorious and infamous as they are powerful, these existing Pirate Crews – sorry fans of the Roger Pirates, defunct and disbanded crews don’t count — we rounded up below are the most powerful in the One Piece universe. 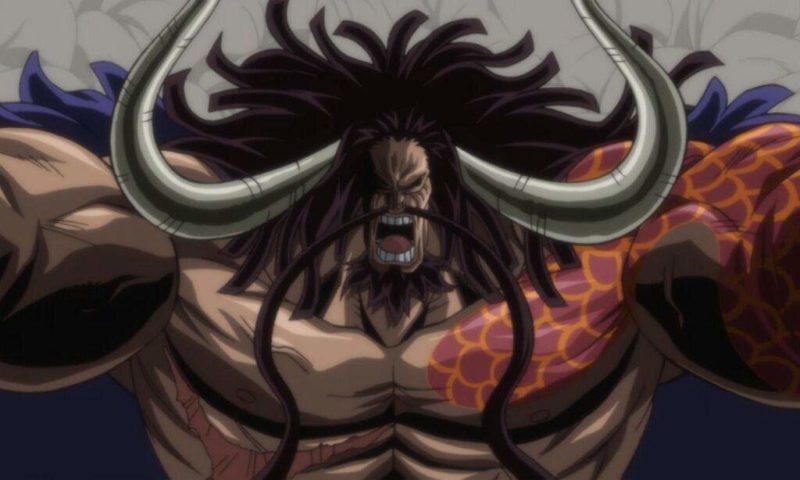 Kicking off our list is the pirate crew helmed by the man that’s considered as the “strongest creature in the world” in One Piece.

Kaido’s presence alone is enough to make the Beast Pirates a force to be reckoned with. However, he’s not the only notorious and powerful pirate aboard the crew.

In fact, of the 10 active pirates with the highest bounties in One Piece, the Beast Pirates have two of them, including Queen the Plague, who currently has a bounty of 1,320,000,000.

This isn’t to say that we’re ranking the pirate crews based on notoriety alone. That would be wrong. This is especially true among Pirate Crews as powerful as the ones in our list.

Plus, bounties don’t really hold that much gravity when we’re talking about the four Yonko and their respective Pirate Crews. Still, it is worth mentioning.

Another thing that the Beast Pirates have going for them is really just how powerful Kaido is.

Lest we forget, Kaido just one-shotted Luffy in his current form. This is no small feat. In fact, it’s arguably Luffy’s biggest and most lopsided loss in One Piece so far.

Considering that was only one punch, we shudder at the thought of Kaido going all out, along with his commanders and other crew members.

The world government definitely has their hands full now that the Beast Crew and Big Mom Pirates have teamed up together to try and overthrow them. 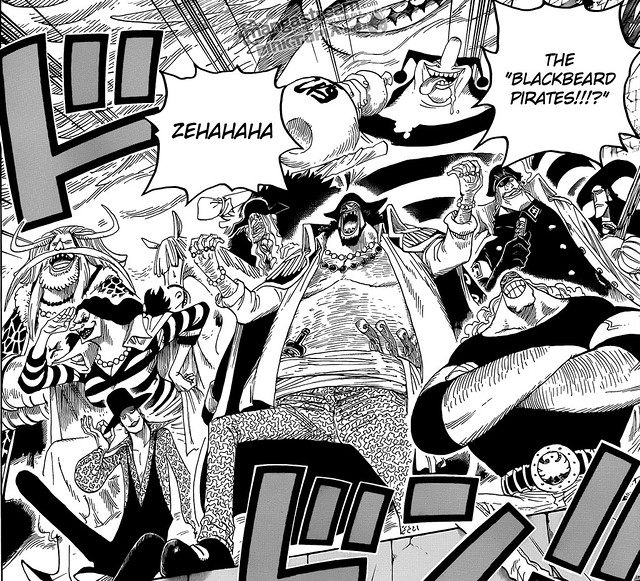 One could make the case for the Blackbeard Pirates as the most Powerful Crew in One Piece to date. Just take a look at their captain, Marshall D. Teach, otherwise known as Blackbeard.

He now holds the power of not just one, but two devil fruits in the Yami Yami No Mi, which grants him the power to essentially turn anything into nothing, and Gura Gura No Mi, which allows him to create earthquakes powerful enough to be felt all over the world.

Again, just as with the Beast Pirates, it’s not just the captain that makes this Pirate Crew to be feared.

Shiryu of the Rain, for example, is the former chief guard of Impel Down, the prison for the worst of the worst in One Piece, and is said to be just as powerful as the jail’s warden, Magellan, who was able to ward off Luffy, a hundred or so inmates, and even the Blackbeard Pirates all on his own.

That’s not even going into detail into the other crew members of the Blackbeard Pirates that are so notorious and powerful that their records were erased from existence, such as Sanjuan Wolf, Vasco Shot, Catarina Devon, and Avallo Pizarro.

Other noteworthy feats of power of the Blackbeard Pirates include effortlessly capturing Jewelry Bonney, one of the Worst Generation and who they deemed to be too weak for their crew. 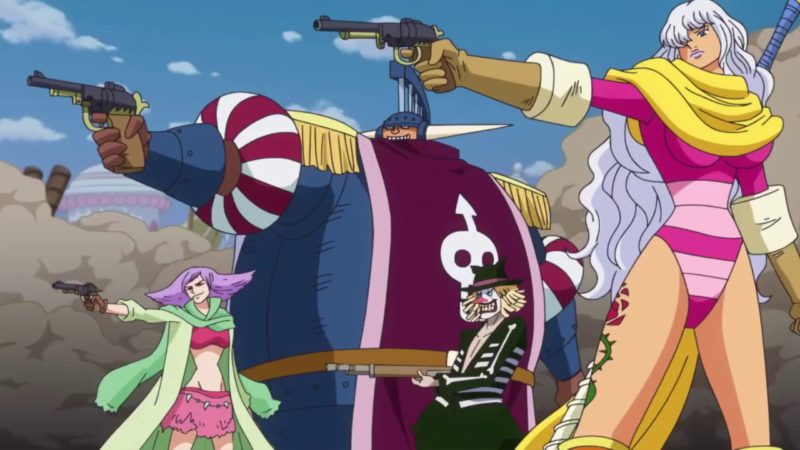 So far, we haven’t seen Big Mom fight for real yet, so we can’t really say for sure just how powerful this gigantic woman really is.

But, we do know that she is one of the Yonko and has been since before the start of the anime, so we know that she’s very powerful.

Another thing that we know is that the Big Mom Pirates are very notorious.

With five members of the Big Mom Pirates among the 10 pirates with the highest active bounties in One Piece so far, including Charlotte Katakuri, who Luffy barely managed to defeat – we are of the opinion that it took a lot of bias in Oda’s part to let Luffy defeat arguably Big Mom’s most powerful crew member – whose bounty is a staggering 1,057,000,000 berries.

Now allied with the Beast Pirates in their plan to take over the world, we may not see just yet just how powerful the Big Mom Pirates can be when up against pirates of their own caliber.

One thing is for sure though, when that happens, it’ll make for one hell of an arc.

Arguably the most easy-going pirate crew among the four “emperors of the sea” in One Piece, otherwise known as the Yonko, the Red Hair Pirates are led by the former Roger Pirates member, Shanks.

The actual strength of the Red Hair Pirates is currently unknown. They’ve had very few shows of strength in One Piece if at all.

However, of those few moments, we can take away just enough know that the Red Hair Pirates deserve their reputation.

For example, Shanks alone was effortlessly able to put all but the most powerful members of the Whitebeard Pirates to their knees using his superior mastery of Haoshoku Haki.

Also, the Red Hair Pirates managed to fight off Kaido, and quite possibly the rest of the Beast Pirates, while on their way to Marineford to try and put a stop to the war.

Speaking of the war, as soon as the Red Hair Pirates appeared in Marineford, everyone pretty much stopped dead in their tracks.

Shanks, nor the rest of the crew didn’t even have to do anything. Even the then-Admiral Kizaru stopped his pursuit of Luffy as soon as Benn Beckman, one of the officers of the Red Hair Pirates appeared and pointed his gun at him.

Not to mention, Blackbeard himself seemed afraid of a confrontation with Shanks. This is after he was more than ready to wage all-out war against the Marines right there and then at Marineford after killing Whitebeard. 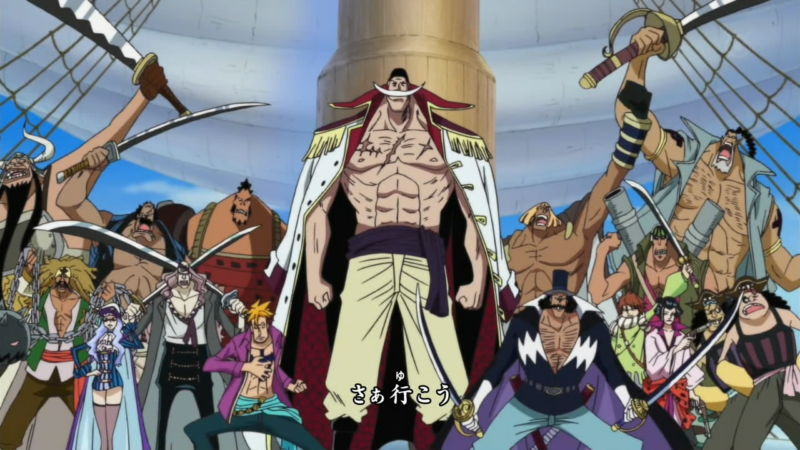 Even with Edward Newgate, otherwise known as Whitebeard, gone, the Whitebeard Pirates are still considered one of the most powerful Pirate Crews in all of One Piece.

Or, at least, until they were forced into hiding following their loss against the Blackbeard Pirates.

Easily one of the largest Pirate Crews to have ever existed in all of One Piece, the Whitebeard Pirates used to have as many as 16 divisions, each helmed by a powerful captain along the likes of Portgas D. Ace, the brother of Luffy and the deceased son of Gol D. Roger, and Flower Sword Vista, who is a powerful swordsman whose skills were recognized by Dracule Mihawk himself.

The Whitebeard Pirates is currently led by Marco the Phoenix, a Devil Fruit user who has the power to turn into a phoenix. 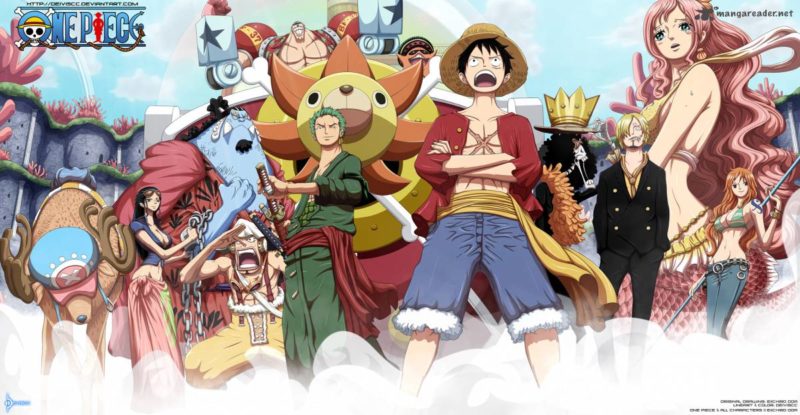 The Pirate Crews of the four Yonko, and that of the former Yonko, are so far ahead of the others that it’s not even a fair comparison anymore.

After all, we haven’t really seen any other Pirate Crew challenge them outside of those belonging to one of the other five. Even the Straw Hat Pirates had to forge alliances to wage war against the Big Mom Pirates.

In fact, the Straw Hat Pirates are now currently in alliance again with a number of powerful Pirate Crews as they attempt to wage war against the Beast Pirates.

The Strongest Active Pirate Crews in One Piece

As mentioned earlier, the focus on the most recent arcs in One Piece is one the Pirate Crews of the Yonko as the rest form alliances to try and take them down.

This has made it difficult to assess the strength of any other Pirate Crew in One Piece.

Nevertheless, we did try our best to make this round up as fair and as objective as possible.

The Top 10 Strongest Female Characters In One Piece

Most Powerful Devil Fruit Abilities In One Piece

Top 10 Strongest Swordsmen In One Piece