Family Values is a quest under the Every Story Has An Ending episode in Assassin’s Creed Odyssey.

Your task is to find and talk to Theodoros but he may have been captured by Mestor.

Here’s a walkthrough of Family Values in AC Odyssey. 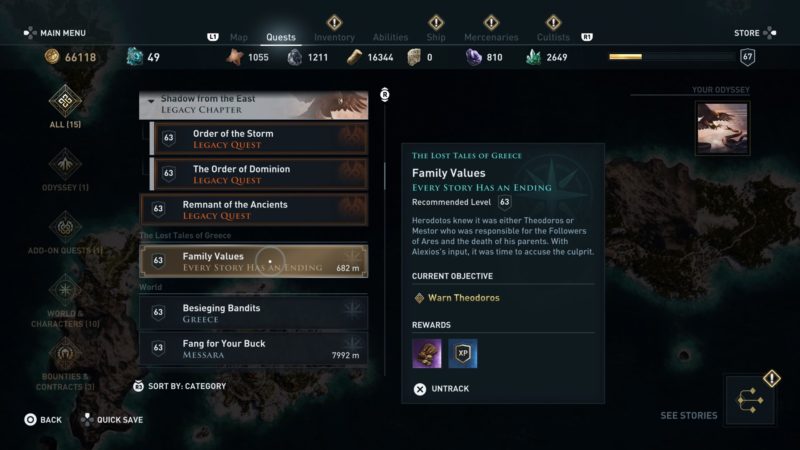 This quest is recommended for level 63 and above, but it differs according to your own level.

If you had chosen Mestor as the bad guy in the previous quest, then you have to warn Theodoros in this quest.

His location is shown in the map below, marked as the quest symbol. 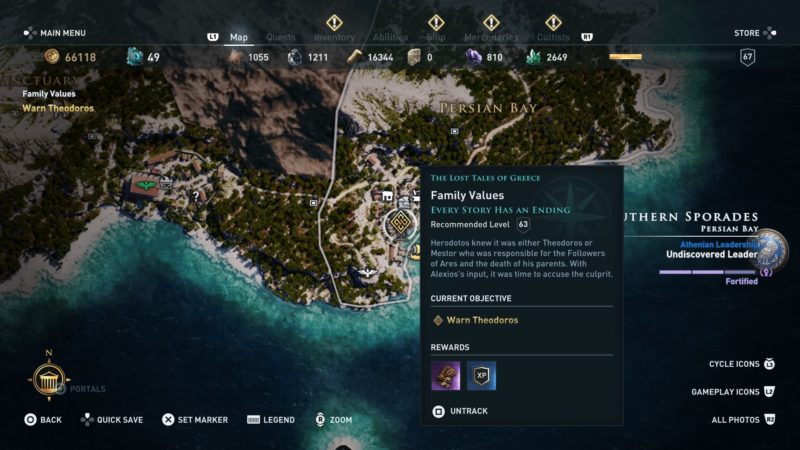 He’s inside Herodotos’ and Theodoros’ house. 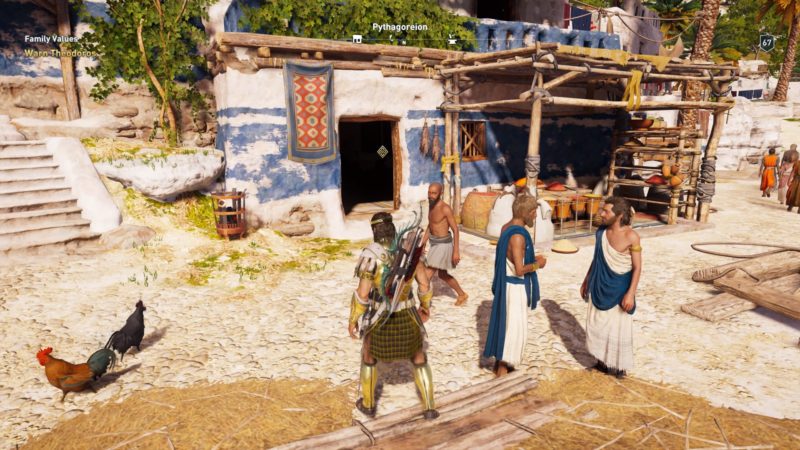 Talk to him inside the building. 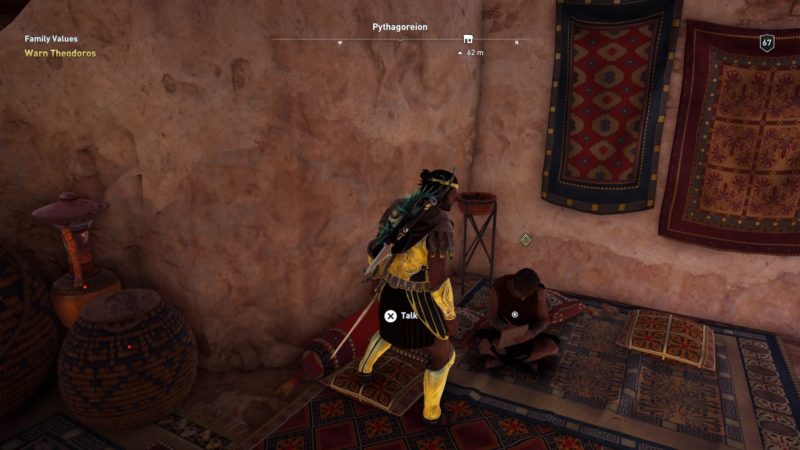 After Theodoros leaves to confront Mestor, you guys will be ambushed.

Protect Herodotos by killing the ambushers. 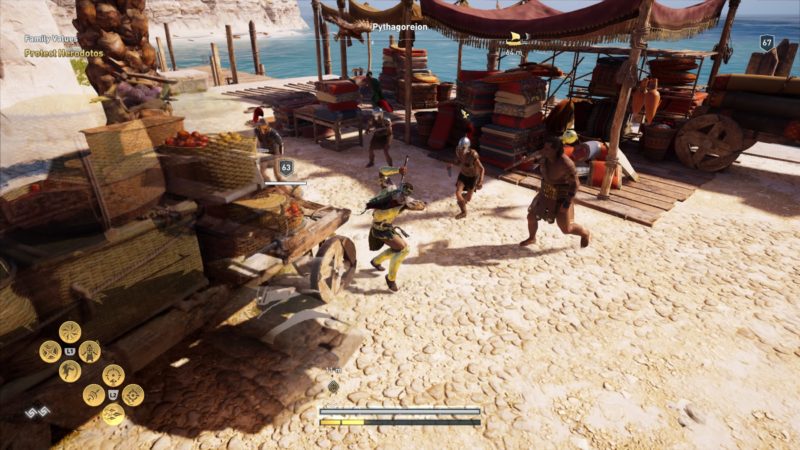 Find and talk to Theodoros

After eliminating the hostiles, look for Theodoros. His location is shown in the map below, within the yellow radius. 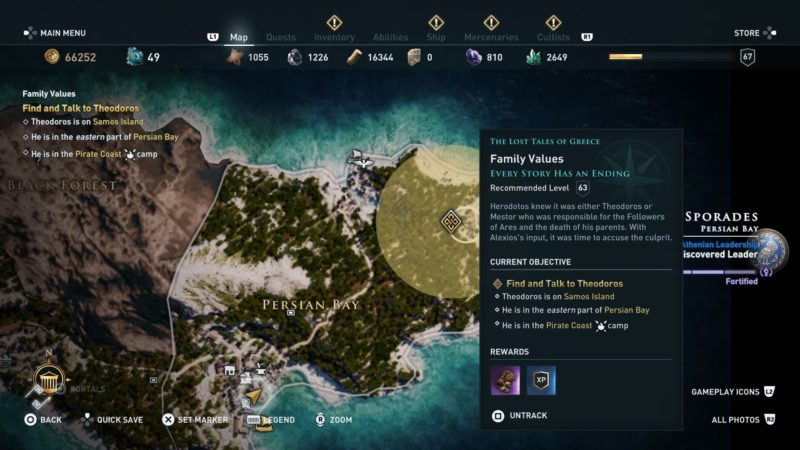 As you get nearer, use Ikaros to pinpoint the exact location. Herodotos will follow you there. 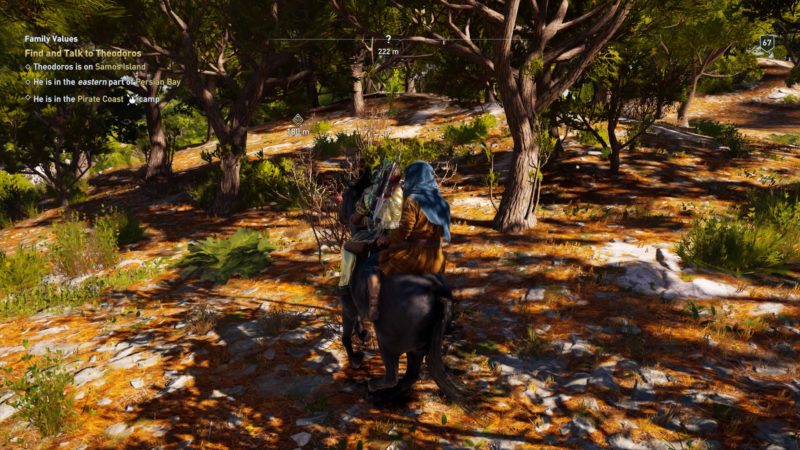 You should then reach a base beside the sea. 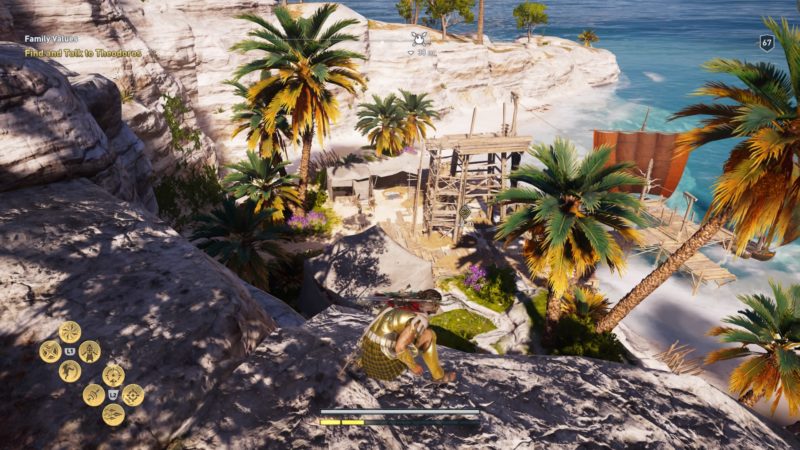 Kill all of the guards in the camp site. There are about five of them in total. 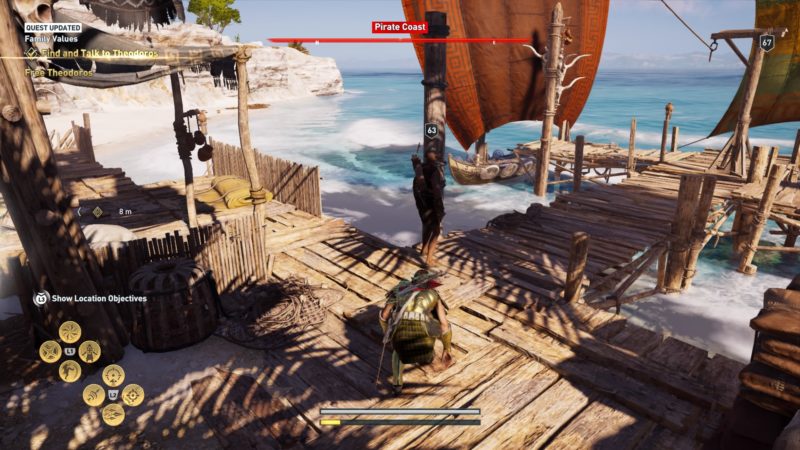 After killing the guards, free Theodoros who is held captive inside the same area. 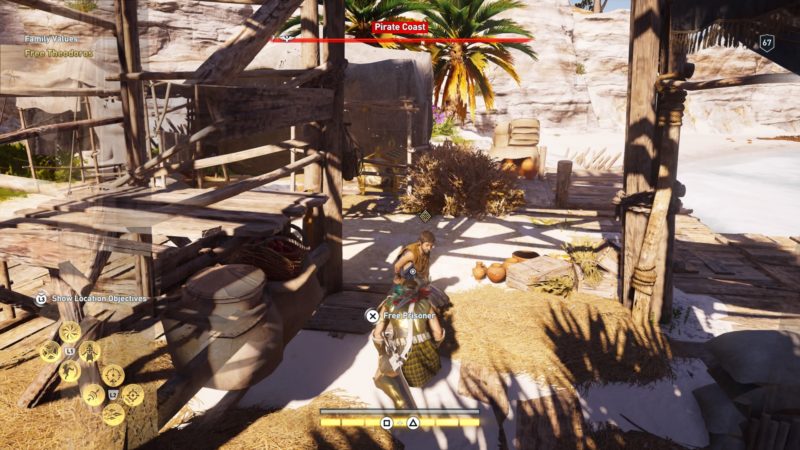 Next, just follow Theodoros to Herodotos. He’ll start running after you’ve rescued him. 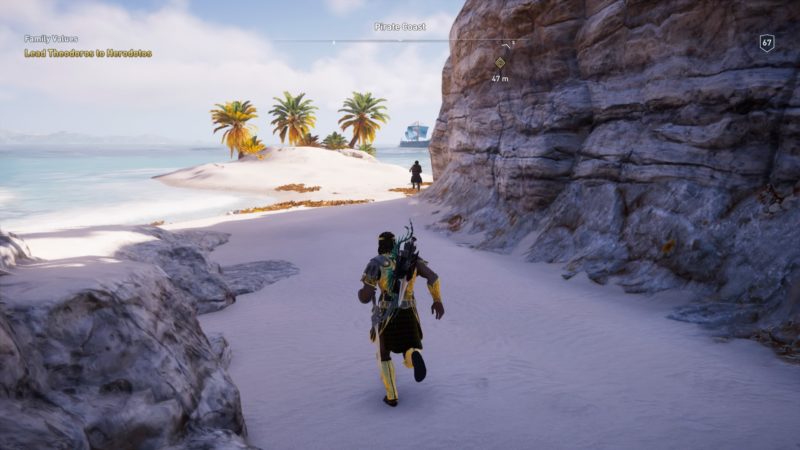 Talk to Herodotos to continue with the quest. 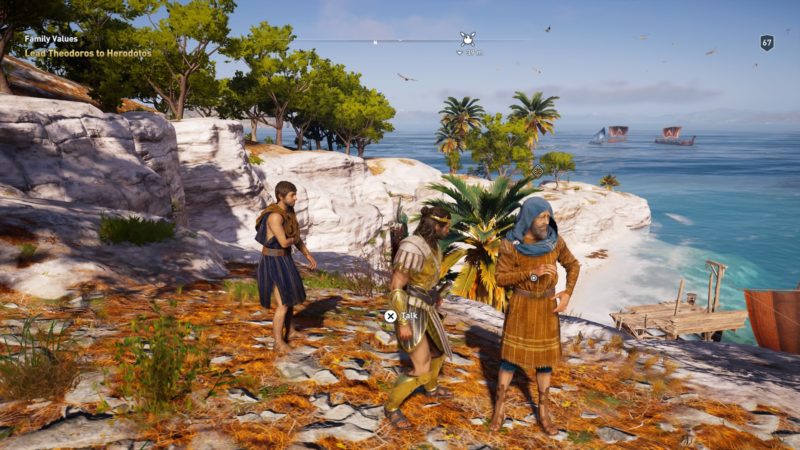 Next, you need to confront Mestor, the guy who is truly behind the Followers of Ares. 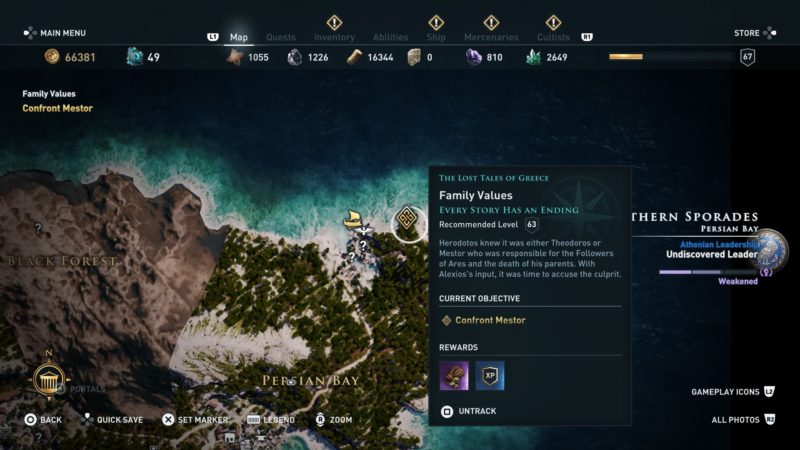 You will see him standing on the cliff facing the sea.

Mestor is pretty weak. You should defeat him easily. 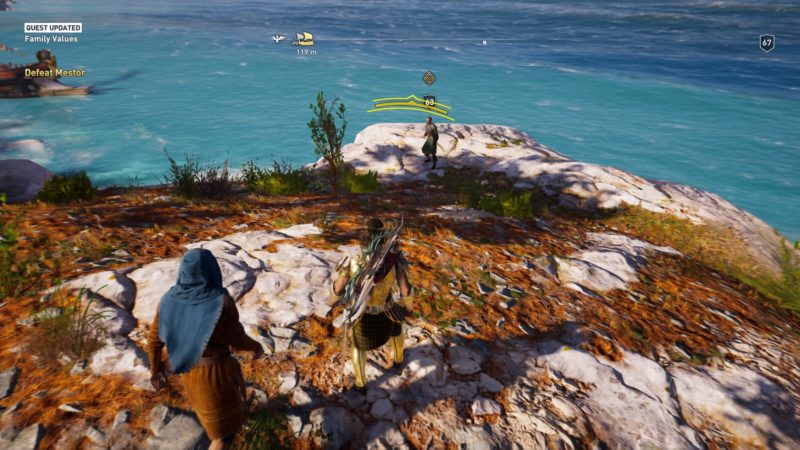 Once you’ve defeated him, talk to him to continue. 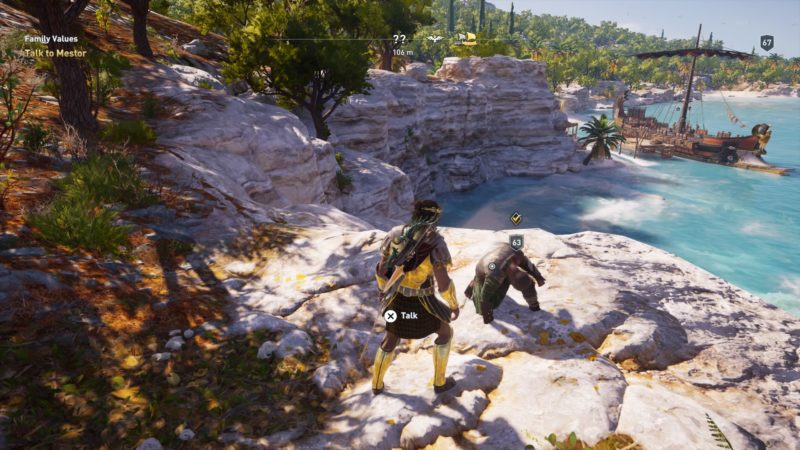 The quest completes here after the cutscene. You will earn some drachmae upon completion. 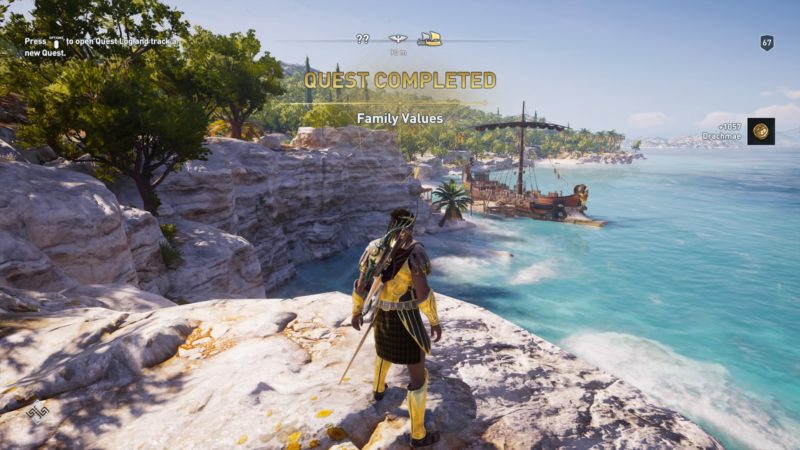