Dark Horse is a main quest under the Atlantis DLC in Assassin’s Creed Odyssey.

Your task is to meet Persephone and help her recover her underworld horse.

Here’s a walkthrough of Dark Horse in AC Odyssey. 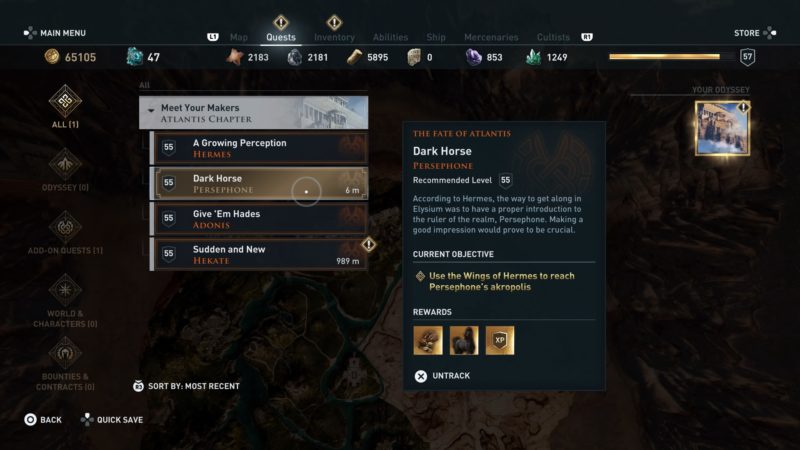 This quest is recommended for those level 55 and above, but it differs according to your own level.

Get to Persephone’s akropolis

Your first task is to get to the akropolis. Use the Wings of Hermes teleporter at the exact location shown in the map below. 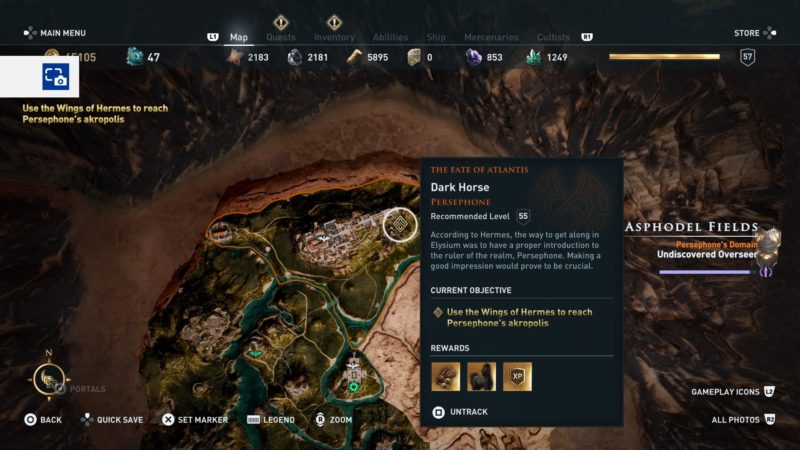 Interact with this teleporter. 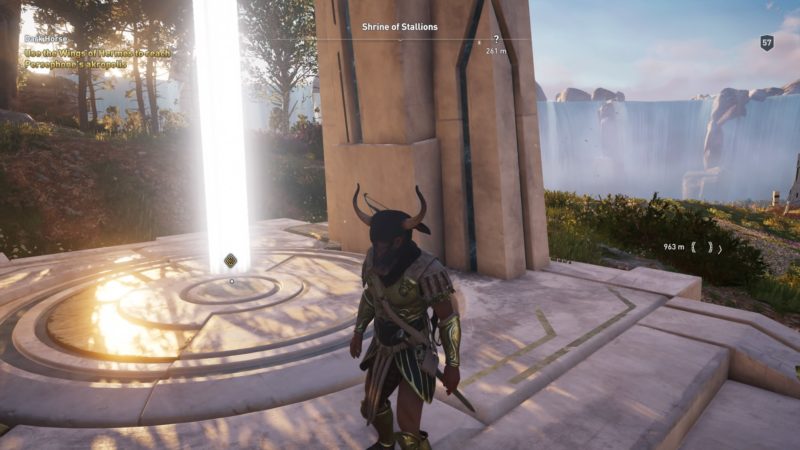 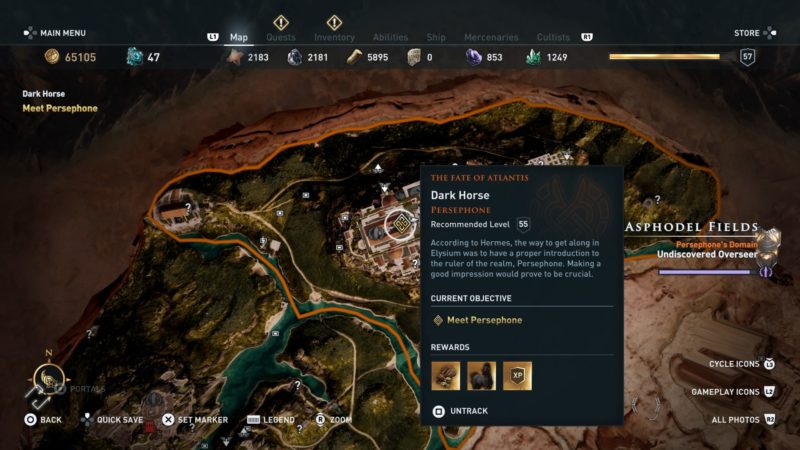 You can summon your horse here, if you wish to go faster. 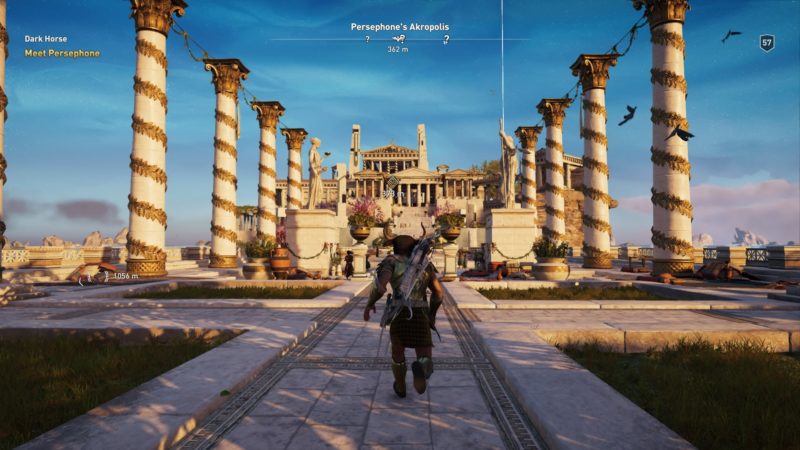 Go all the way until you reach this door at Pherephassa Point. There’s a fast travel point above the building if you wish to synchronize first.

Interact with the door when you’re ready. 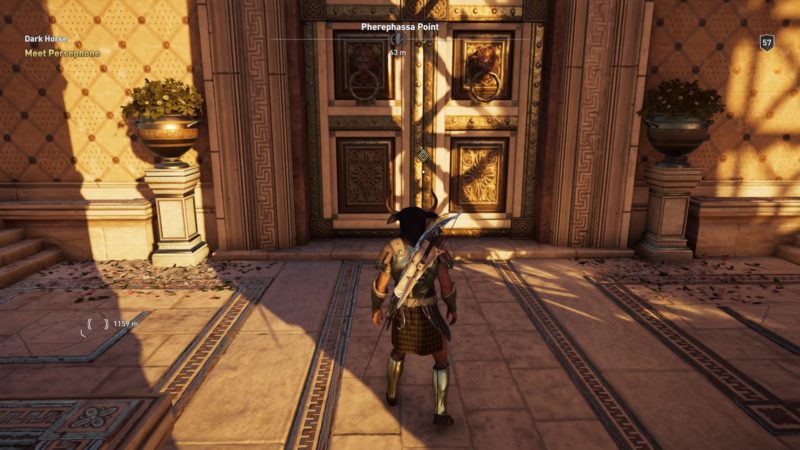 Find and return Orphnaeus the horse

Persephone will tell you that her horse from Hades has been taken. You have to help her return it.

Get to the location shown in the map below. 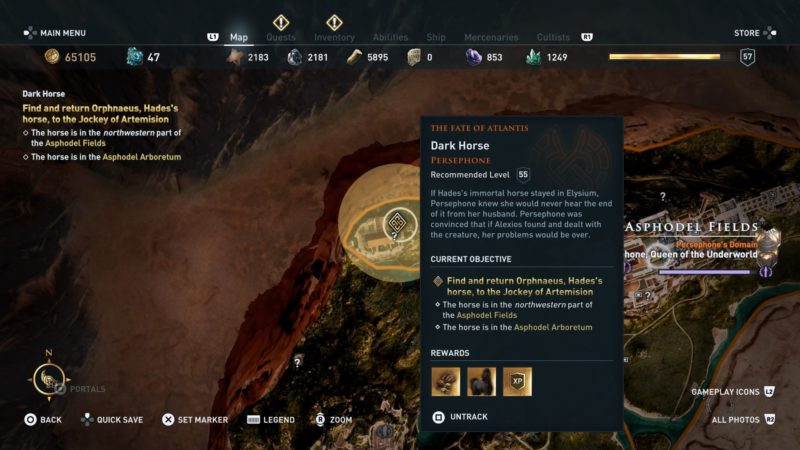 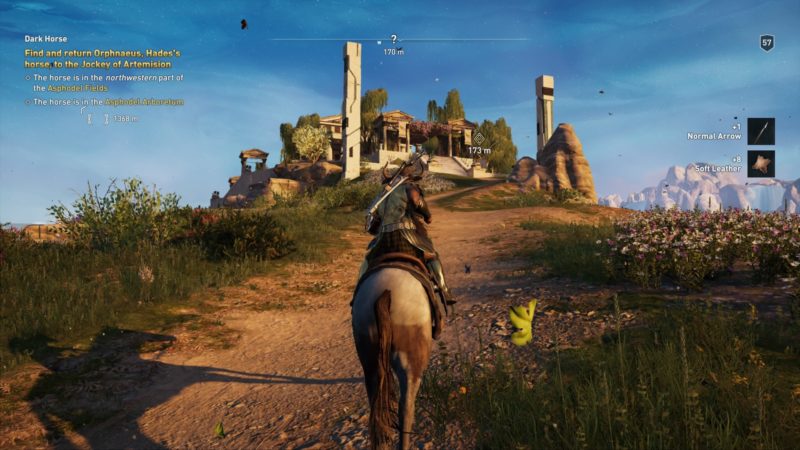 Infiltrate the arboretum to find the horse

You will reach the Asphodel Arboretum which is filled with guards.

You should stealth kill the Kolossi (statue guards) first. This way, they won’t attack you when you’re in conflict with the Isu soldiers. 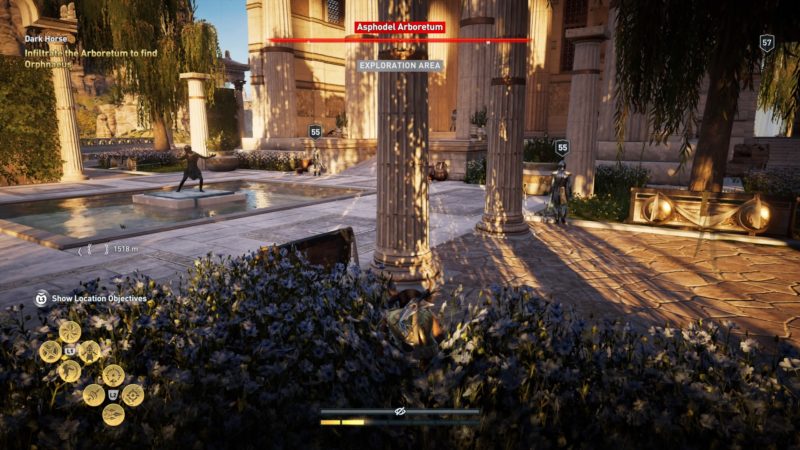 There’s also a Torch of Hypnos here. You can destroy it to reduce Persephone’s control over Elysium. 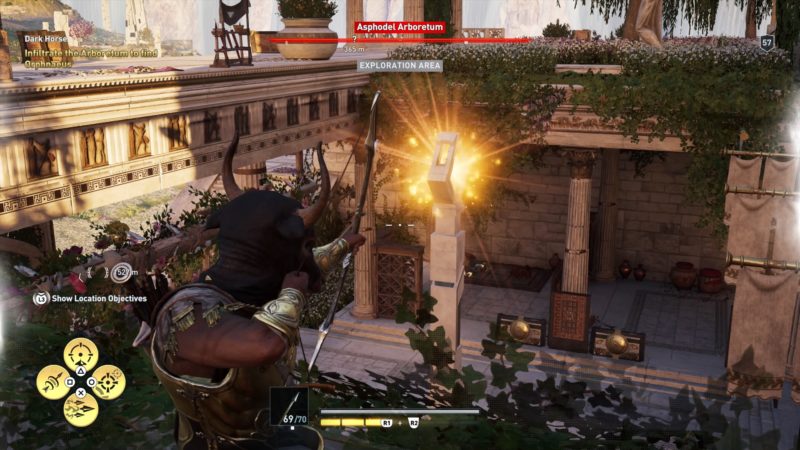 You don’t need to take out all the guards in the compound, but it’s up to you. 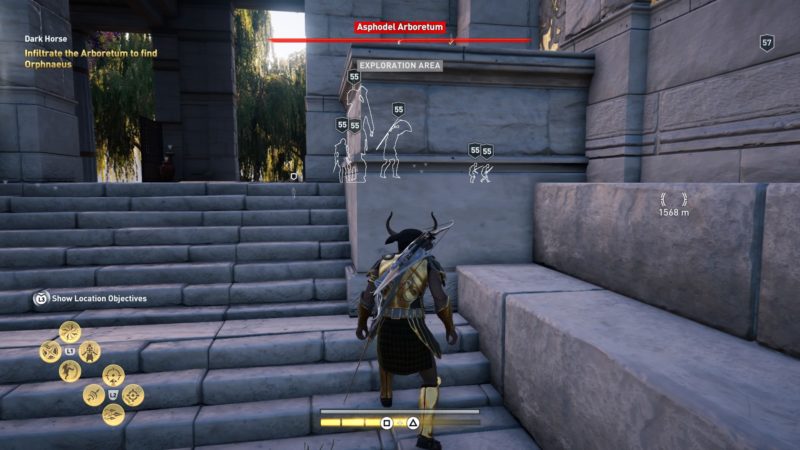 To enter the Arboretum, get to the side of the building. There’s an open window here above the statue. Climb into it. 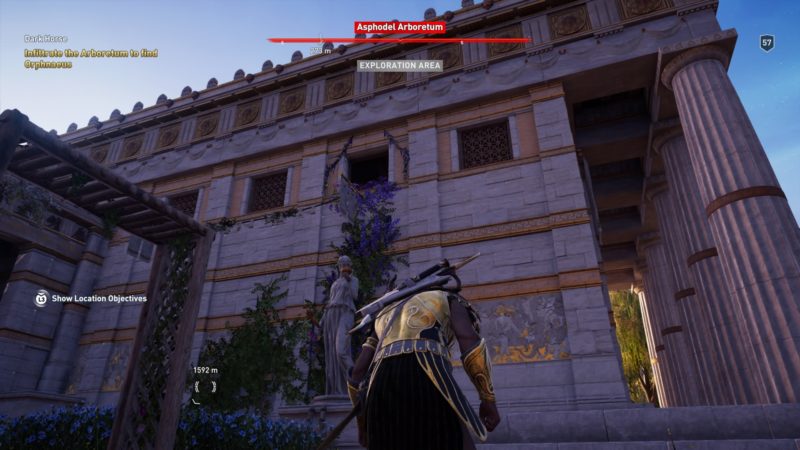 The horse is inside with a blind man. 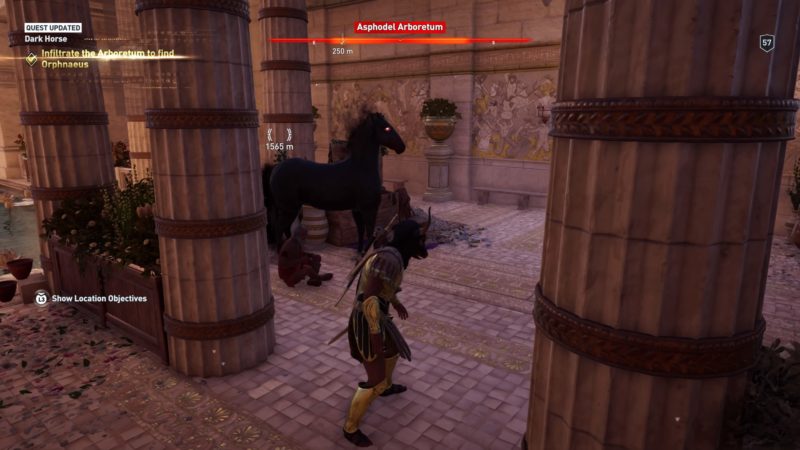 During the conversation, I chose the 3rd option, i.e. bring it for Adonis’ rebellion.

Bring Orphnaeus to either the Jockey or Adonis’ contact

You now have a choice. You can either bring the horse to the Jockey for Persephone, or bring it to Adonis’ contact.

The Jockey is located in the map below. 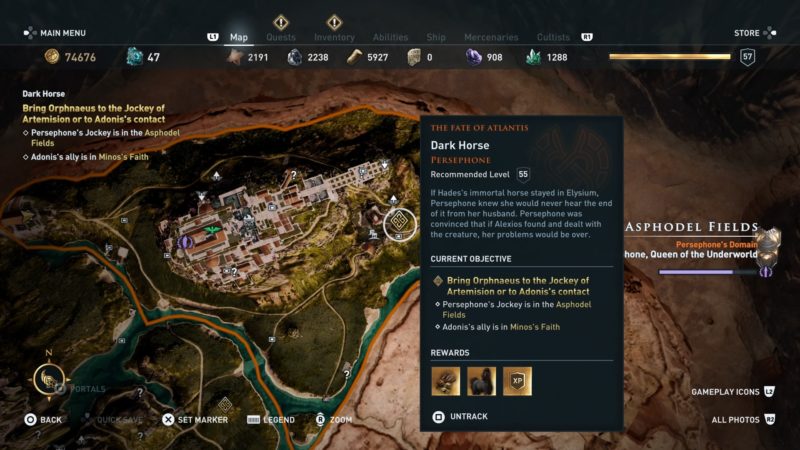 As for Adonis’ contact, his location is shown in the map below, in Minos’ Faith. 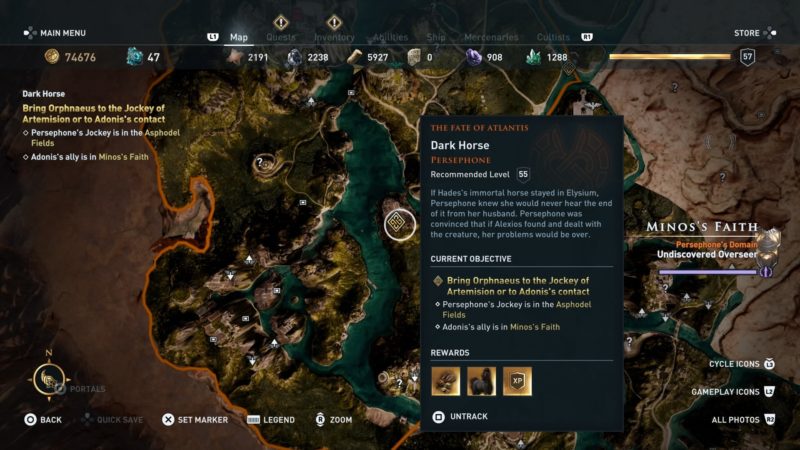 Personally, I chose to bring the horse to Adonis’ contact. 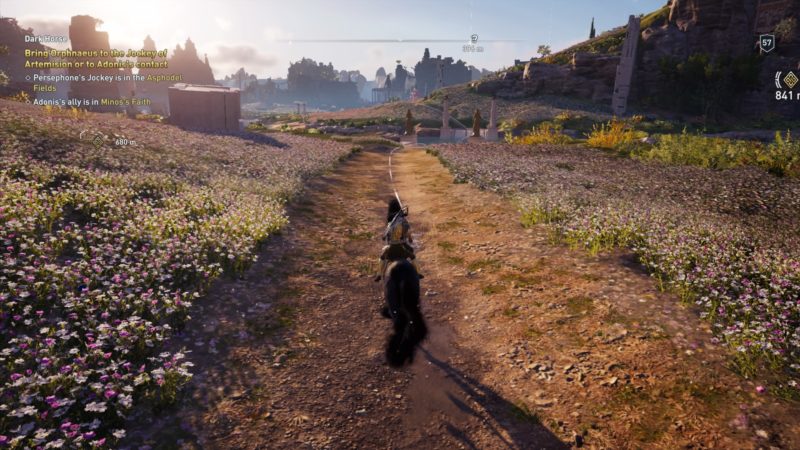 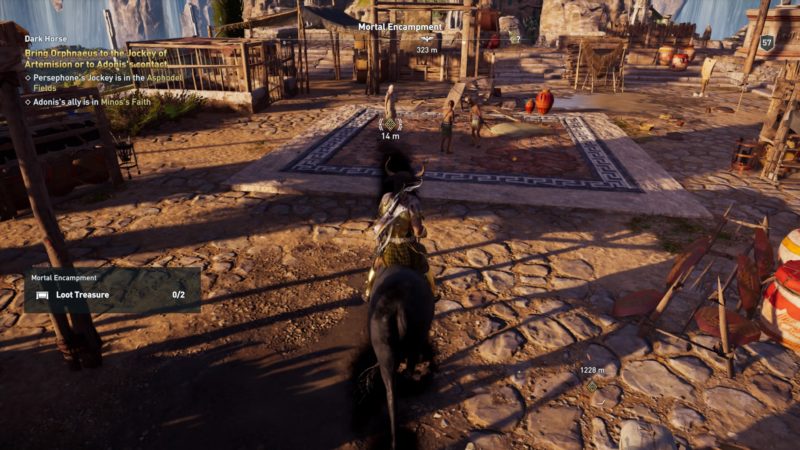 After delivering the horse, return to Persephone at the akropolis. 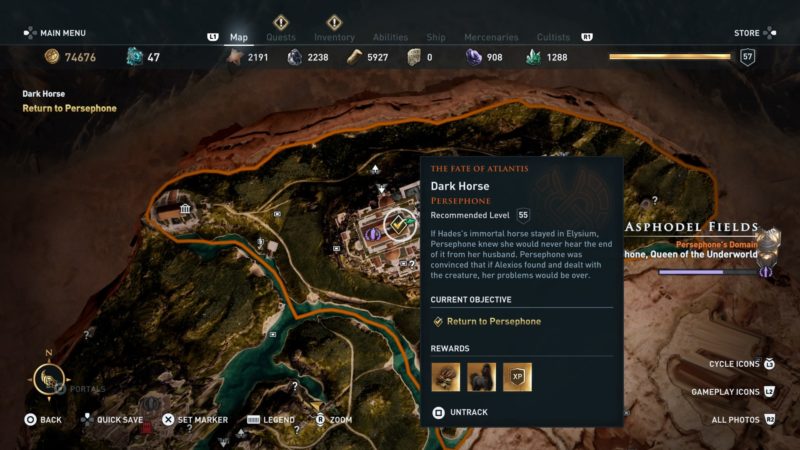 During the conversation, I chose “I took care of it”. 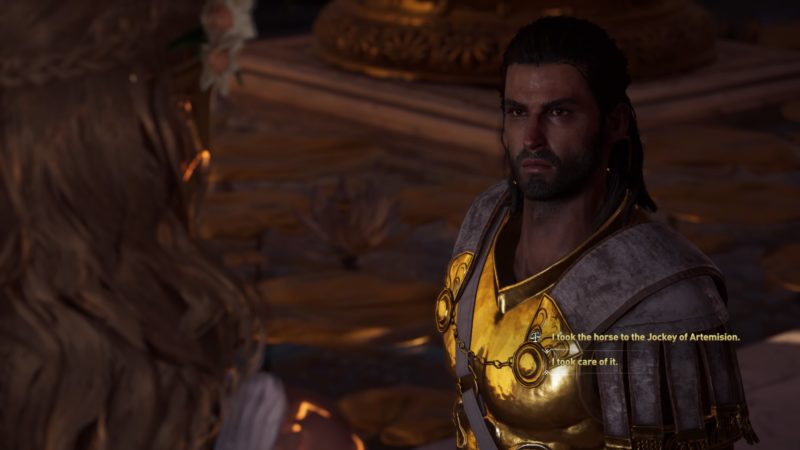 Talk to the Jockey of Artemision

If you followed my choice, you have to talk to the jockey at the exact location shown below. 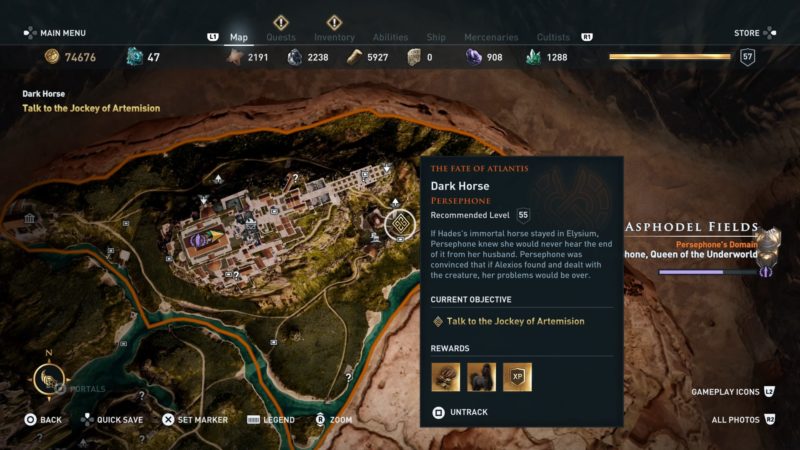 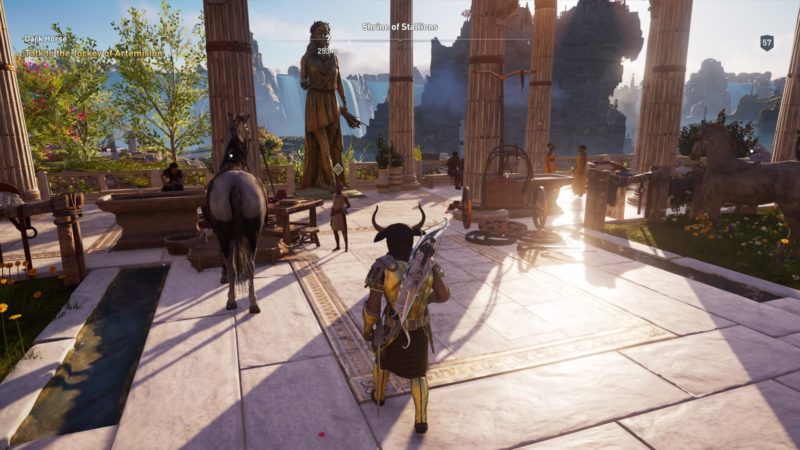 During the conversation, I chose to make a deal with 1,000 drachmae. It probably doesn’t matter which option you choose.

The boy doesn’t need drachmae here in Elysium. Alexios will end up forcing him to lie to Persephone. 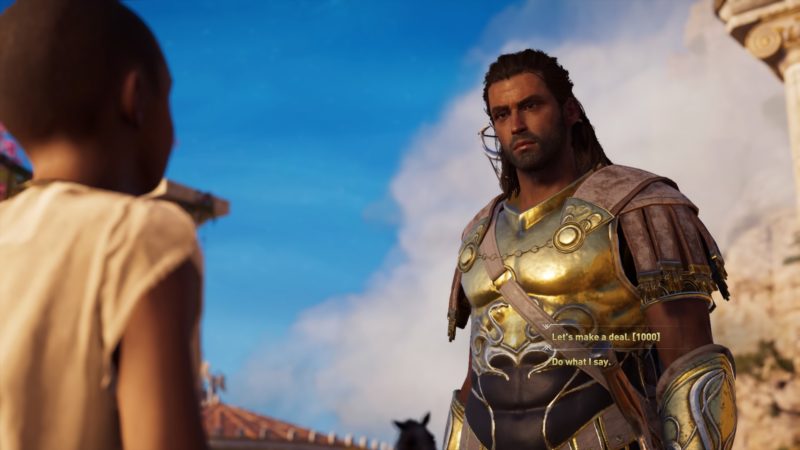 The quest completes here and you’ll get some drachmae, plus you unlock Orphnaeus the horse. 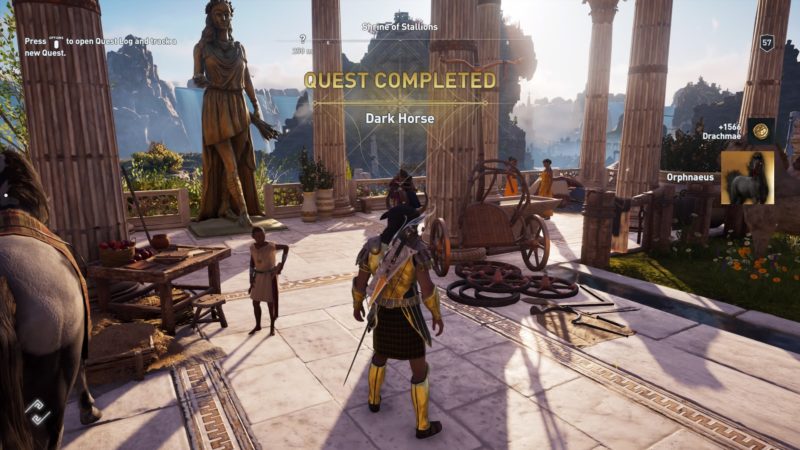