Enjin Coin has risen around 1,000% since I first acquired it when it was $0.05. Pretty incredible to see the growth but sadly I didn’t invest that much in it. Why is it so popular and what difference does it make?

What is Enjin Coin for?

It is basically a gaming coin. Not a casino-type gaming, but MMORPG type of gaming or any type of games, be it FPS games or strategy games. The issue with games is that you may have a super impressive item but you can’t sell it easily. There is an issue of transparency and whether you’ll get the money for the item you sell. That’s because it’s hard to trust people over the internet.

The introduction of blockchain technology may have solved this problem. It comes with a distributed ledger meaning anyone can see all of the transactions of the coin and the addresses it goes to. With Enjin coin, you can possibly sell your in-game items for these coins and then use the same coins to buy items from other games!

This means there won’t be a waste of resources. Imagine if you stopped playing a certain game and you have acquired many expensive in-game items. There may still be a demand for those items even after you’ve stopped playing the game. You can then sell it off for Enjin coins instead of leaving it abandoned in your account. 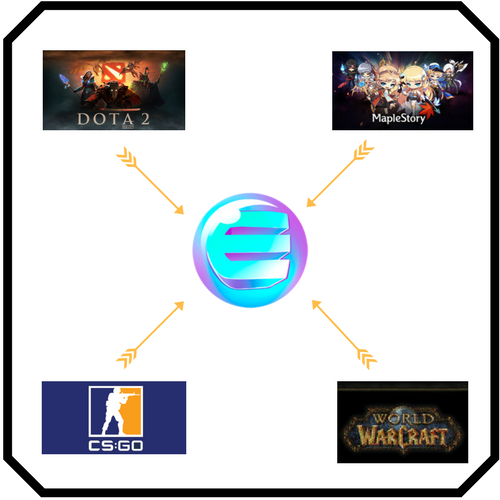 Why is Enjin Coin popular?

If you visit the site, it looks very promising and they seem to know what they’re doing. Apparently they already have a huge community and is said to be the largest gaming community creation platform in the world. They have over 18 million gamers onboard and this Singaporean-based company was launched in 2009, so they have some experience in the industry.

Gaming in general is also a lucrative business with top gamers making millions and some full-time gamers make money via advertising and sponsorship. With so many big gaming companies that are worth billions, it’s no surprise that everyone wants a piece of a cryptocurrency that might change the gaming landscape.

They have a very comprehensive White Paper so do check it out. I don’t see the need to re-write everything they have already stated in the White Paper itself.

They will have a total supply of one billion Enjin coins, so it’s quite a big supply. I believe it can still go higher in price even though it’s about $0.47 at the time of writing. They’re still very new and came into existence in October or November.

If you want to buy it you can use Binance or other exchanges that have listed this coin. It’s an Ethereum based token so you can use MyEtherWallet.

Enjin Coin is a gaming coin and it will solve many problems with gaming right now, which is detailed in the White Paper itself. Do read it yourself to understand how it fully works and possibly the prospect for it. Crypto is mainly speculation at the moment so don’t invest what you can’t afford to.

Disclaimer: This article is not to be taken as an investment or financial advice. Always do your own research before investing in any coin. As stated above, I do own a portion of Enjin Coins so I can be biased in my views.