A Thousand Words is a side story mission in Far Cry New Dawn involving taking photographs.

Your task is to find nine spots to align all of the photos that you have with the places in the previous game.

Here’s a walkthrough of A Thousand Words and where to find all photograph locations in Far Cry: New Dawn. 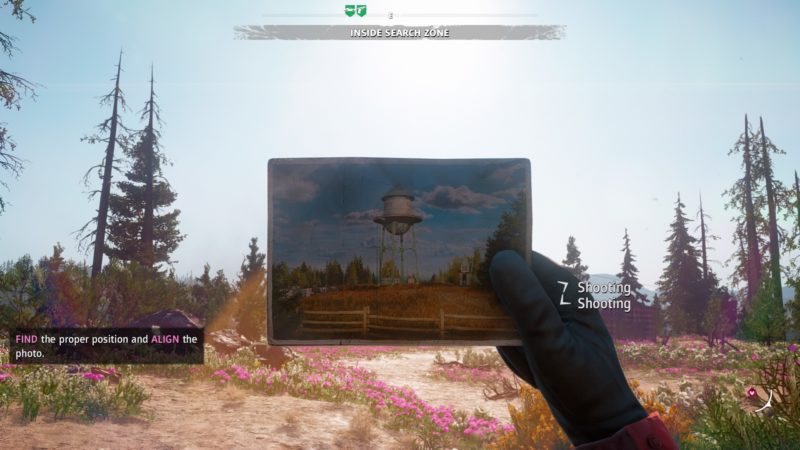 How to start the mission A Thousand Words

Before you can begin the mission, you have to start the mission by going to Prosperity. You should find a camera at the main building where Kim Rye is normally seated.

The mission begins after finding the box that gives you a set of nine photos.

You need to find the locations where these photographs were taken, as they take you back to memory lane.

How to align the photographs

I had this issue the first time around. The only way to align the photo is not by making sure you’re perfectly accurate, but by standing on the circular logo on the yellow rug.

When you’re standing on it, take out the photograph and align it will the right background. Your character will do the rest for you. 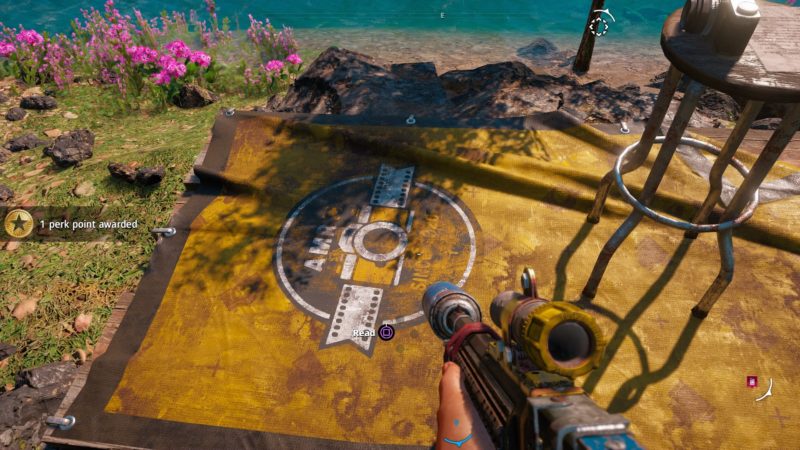 Here are all of the photograph locations for A Thousand Words.

The easiest one is located right beside Prosperity. Just get out through the walls and head towards the left. 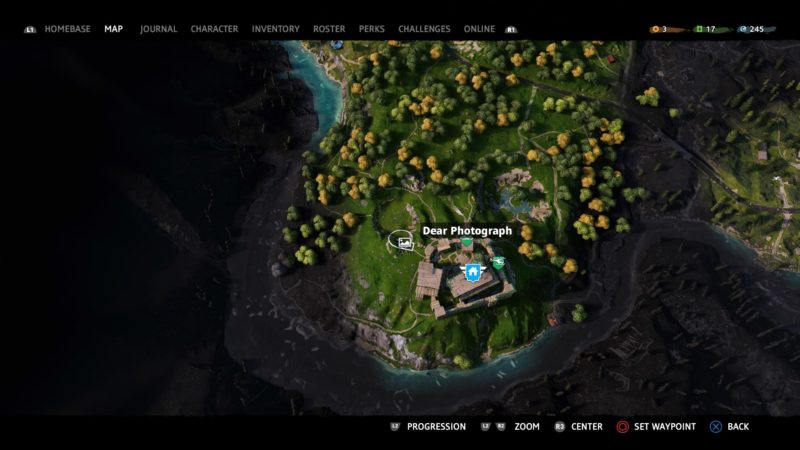 From the location, you can align the photo with the current Prosperity. 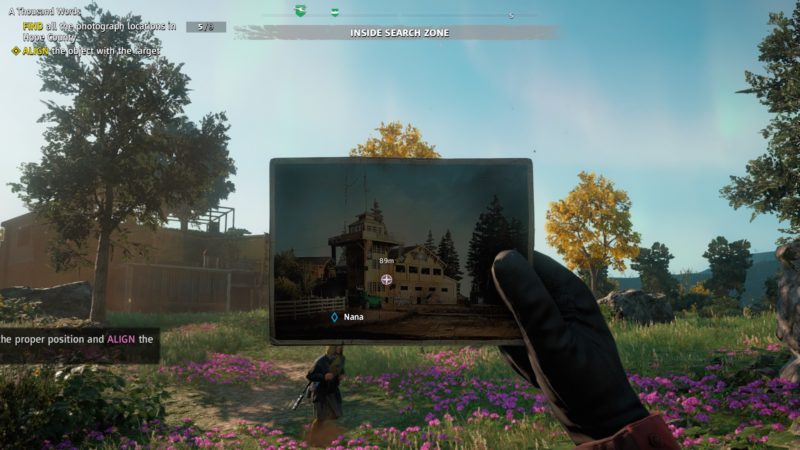 The second one is located near a broken down bridge called Broken Tears that’s really hard to miss. It’s also southwest of the missions by Nick Rye and Sharky Boshaw. 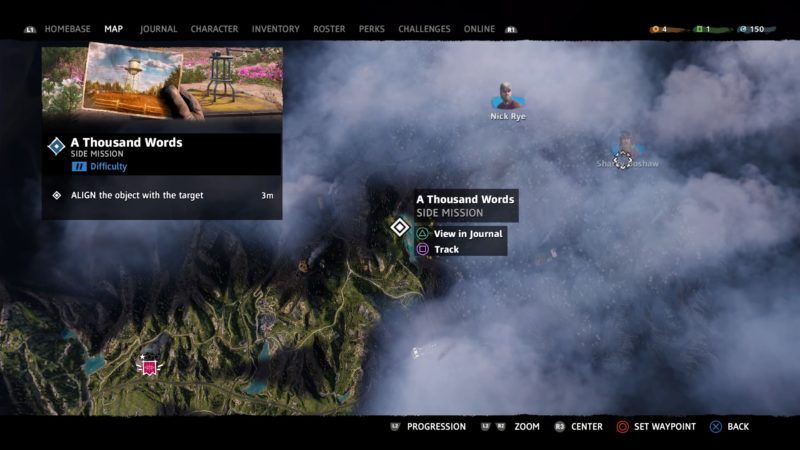 Just beside the river, you’ll see the photo spot. Stand there and align the photograph with the broken down bridge. 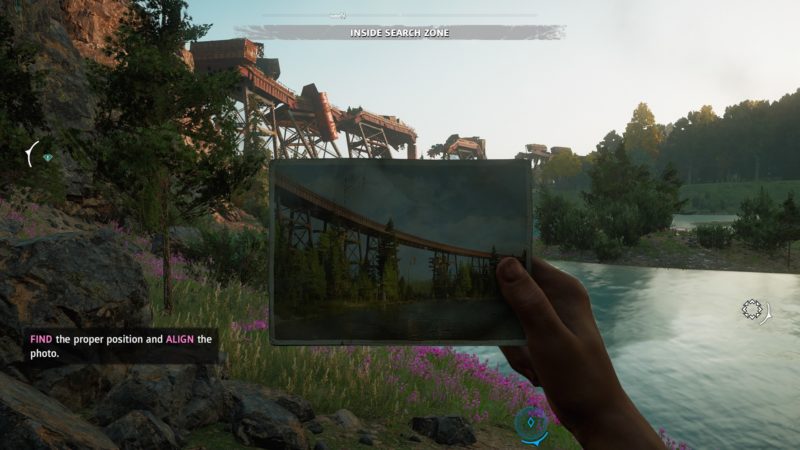 The third one can be found at Joseph’s Sanctuary itself. It’s the most northern place you can go to in New Dawn.

This place is unlocked towards the end of Part 2. 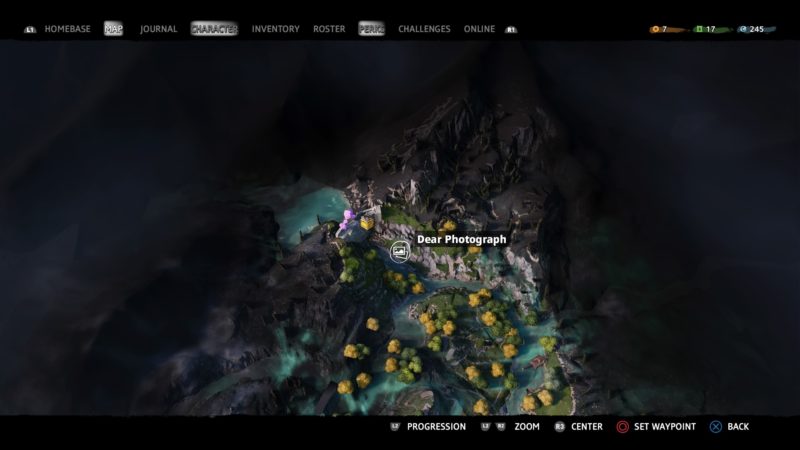 From the sanctuary, just walk down to the river side. On the left side of the river, you will find the photo spot. Align the photo against the sanctuary (image below not accurate). 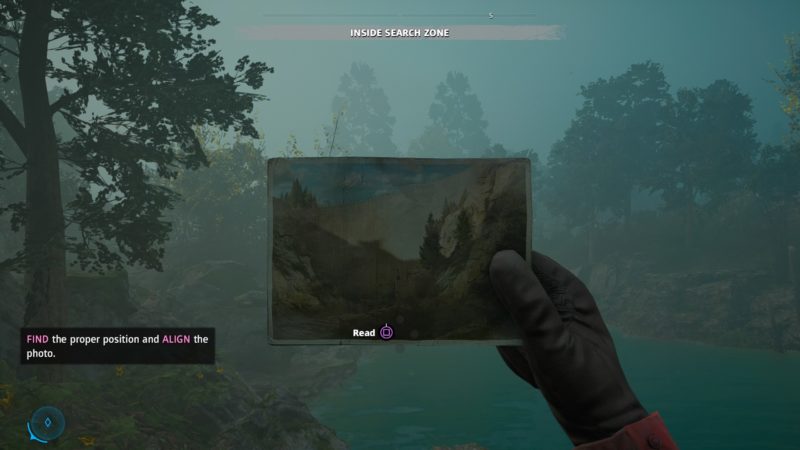 The fourth one is also located right beside a river. It’s near a place called the Old Compound and it’s represented by the “screws” symbol. 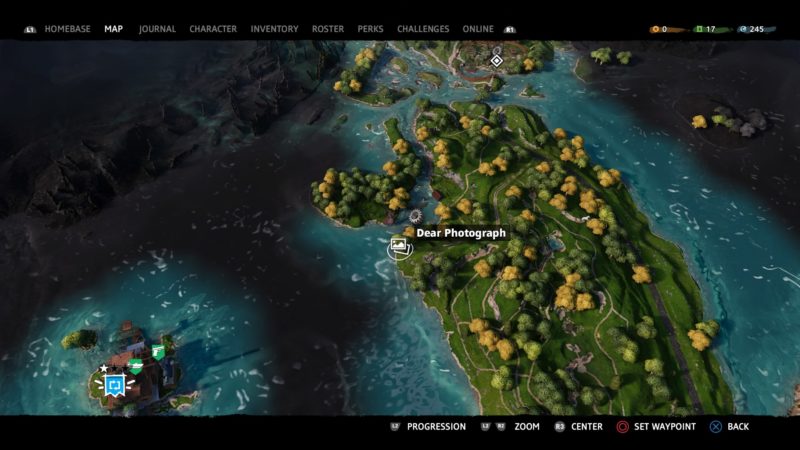 Align the photo against the now abandoned house. 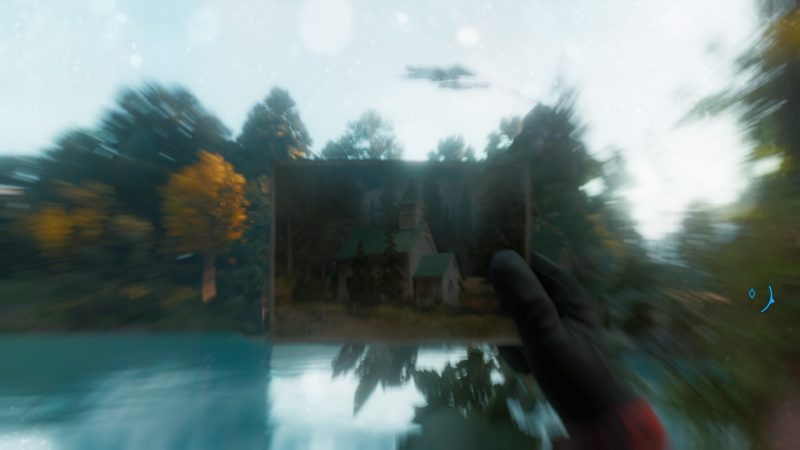 For the fifth photo location, go to a refinery which is actually an outpost. The photo spot is really close to the refinery, just slightly north of it.

It’s better if you just liberate the outpost and it makes a good fast travel spot as well. 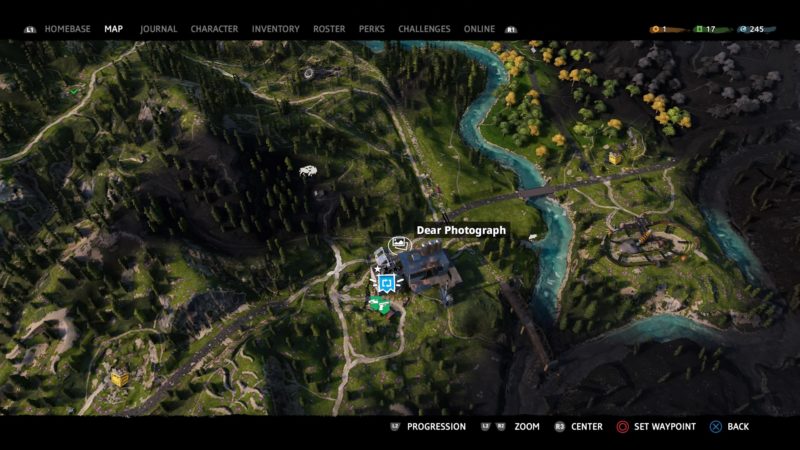 From the photo location, align the photo with a now broken down house. 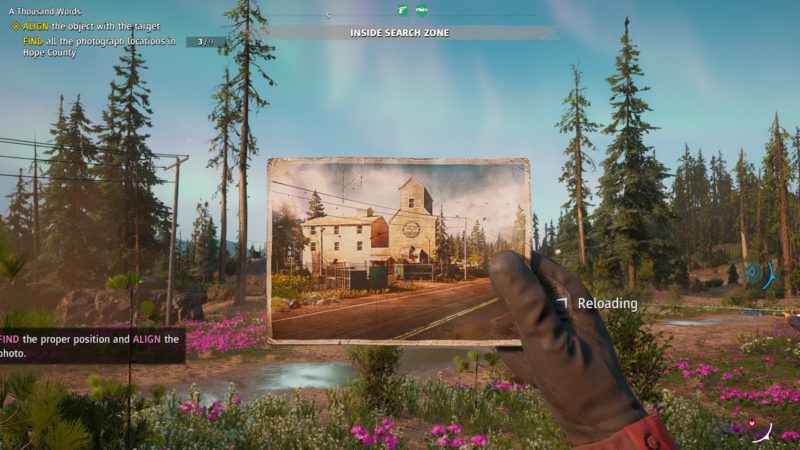 For the sixth photograph location, get to the southern part of the map. It’s near the Nick & Rye Aviation place.

You will come across this place during a side story (Jerome Comes Home). 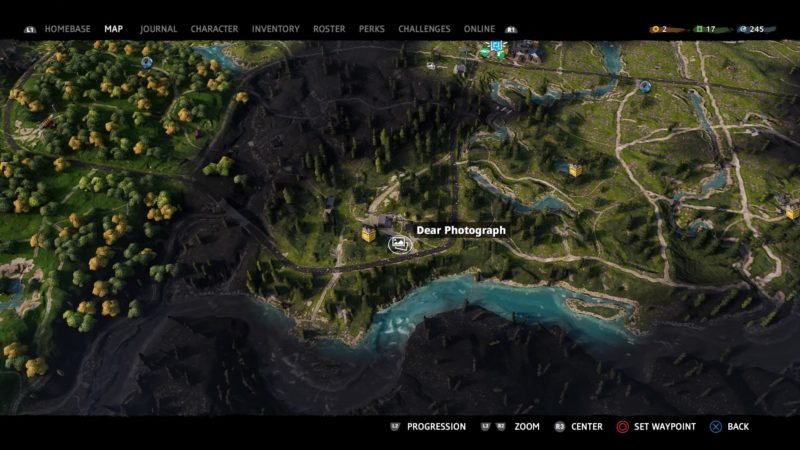 Align the photo against the building. 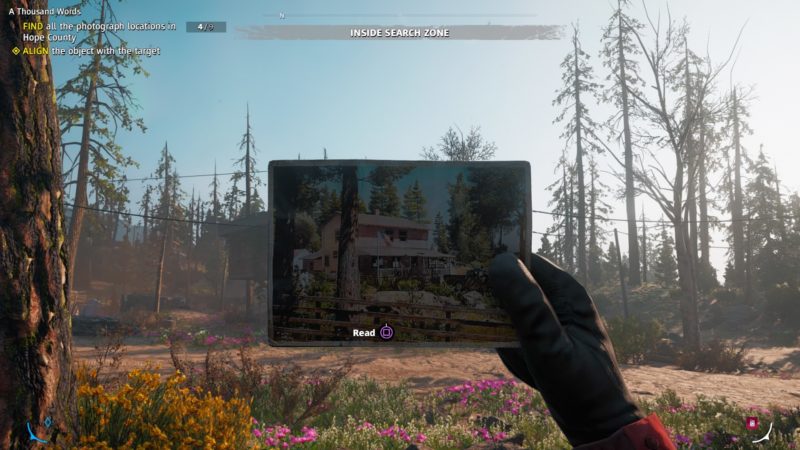 The seventh photo location is just east of an outpost called The Pantry. Once again, it’s better to liberate the outpost first. 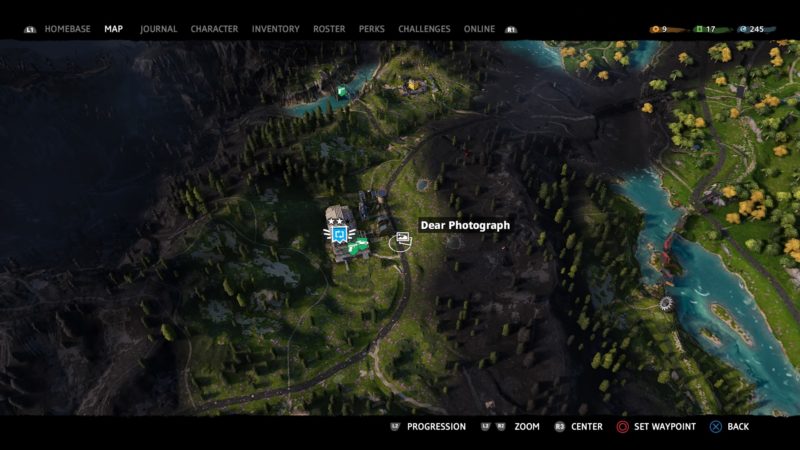 Align the photo with a now abandoned shop. 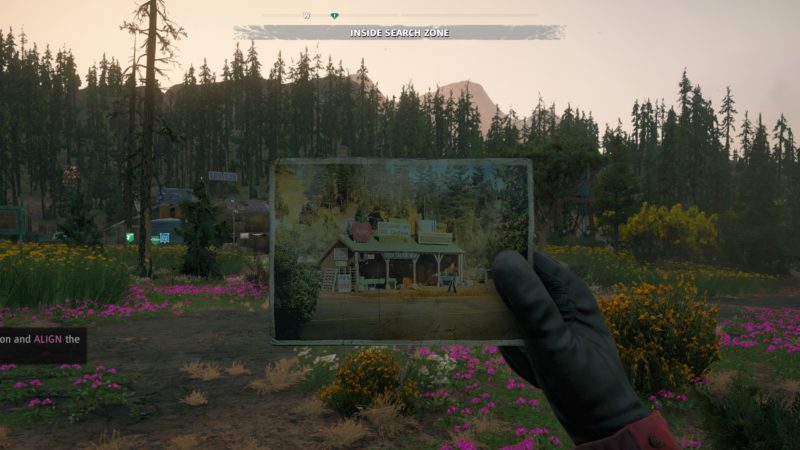 The eighth photograph location is where you’ll meet Sharky Boshaw during the story mission Adventures in Babysitting.

It’s located at one of the most eastern parts of the map. The place is now more of a sewage plant which stinks. You’ll even have a gunfight there during the mission. 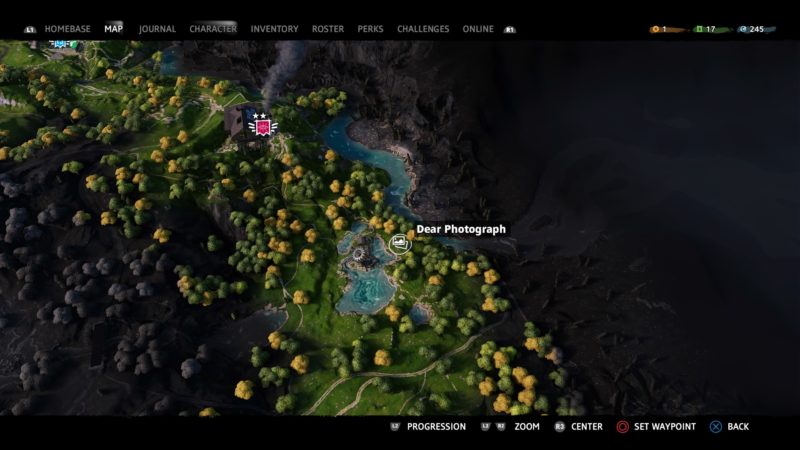 From the photograph location, align the photo with mammoths against the new sewage plant. 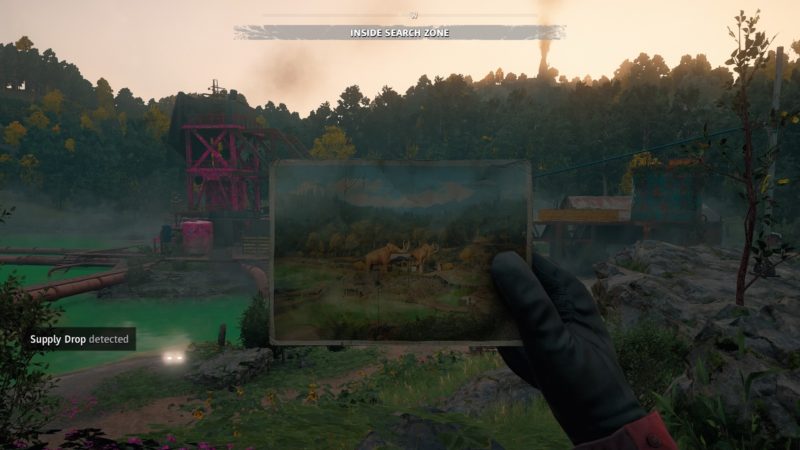 The last photograph location is near an outpost called The Chop Shop. You can choose to liberate the outpost first, but it isn’t that close to the photo spot.

Go west of the outpost and you will find the right location. 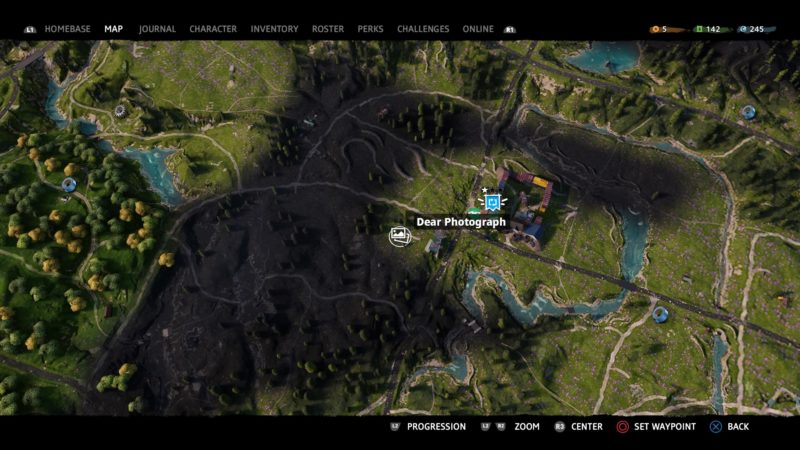 Align the photograph with the water tank and you’re finally done with this mission.

The mission A Thousand Words completes after you’ve aligned all nine photos.

You will also get a trophy called “Before”, as this mission is to bring back memories from the previous Far Cry game. 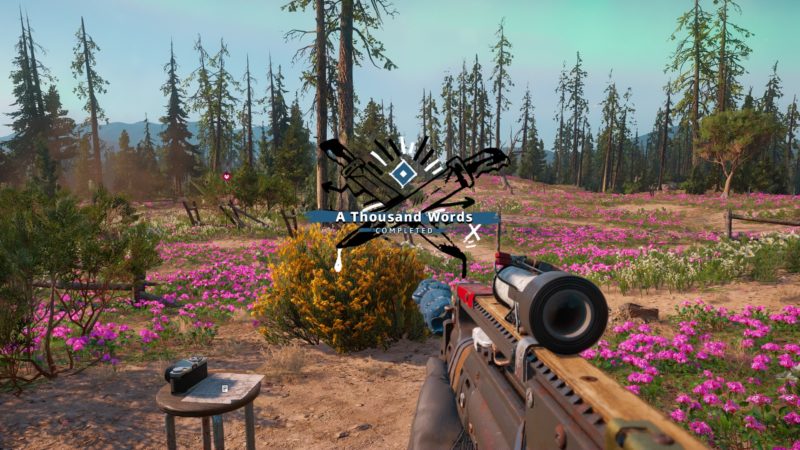