Today’s post is aimed at sharing my experience with Bluehost for the past 6 months.

Bluehost is a web hosting provider and is rather well-known among bloggers, for both good and bad reasons.

Note: There may be affiliate links in the content, which means that I earn a commission if you purchase/sign-up for something using my link. 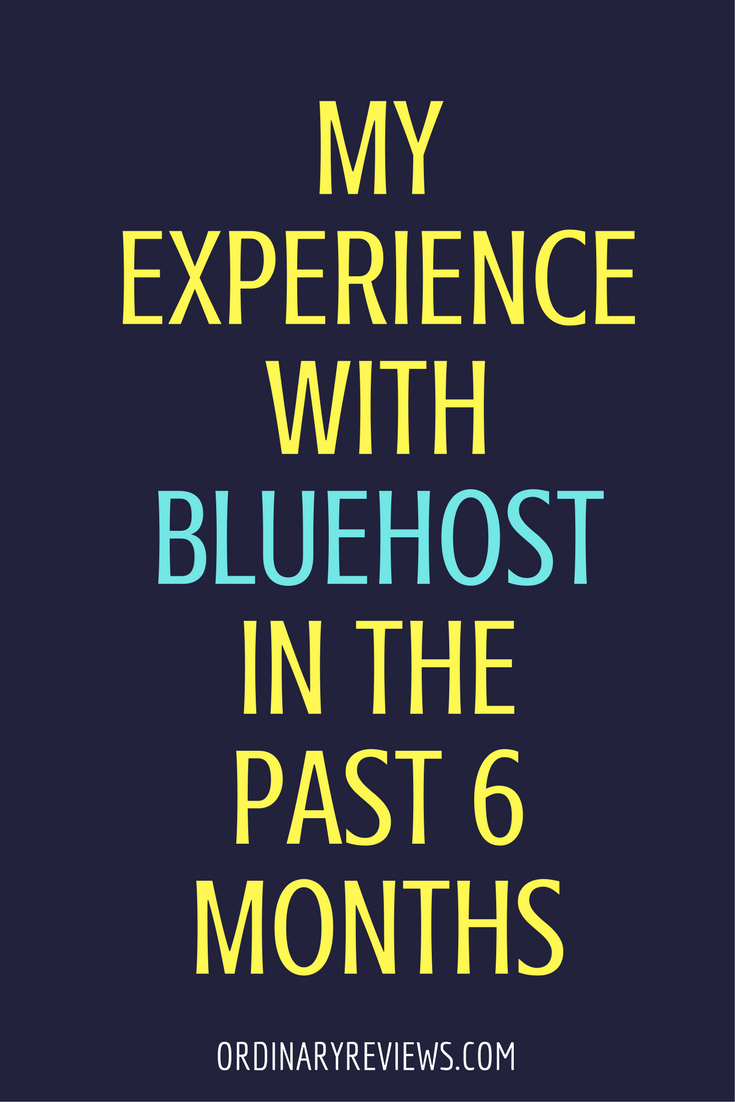 So why did I use Bluehost in the first place?

Like you guys, I had to do a lot of research before I started blogging full-time.

I had to research on how to get traffic to my blog, how to make money blogging, what SEO is, how to get a domain name and so on.

Naturally, the term “self-hosted WordPress” came about very often. What it basically means is that you use WordPress as a CMS to build your website, but you find your own hosting provider, rather than using WordPress.com.

Flowing from that, I had to choose a hosting provider and I went to Google of course.

Most (if not all) of the “top” blogs I visited recommended Bluehost to their readers. One after another, Bluehost seemed to be the best option.

So I went with it of course.

A lot of bloggers contended that Bluehost is highly recommended because of their high affiliate payouts.

I’m a Bluehost affiliate as well, and they supposedly pay $65 per sign-up and I read from other blogs that you can increase the fees if you make enough sales.

I do believe that the high payout is one of the reasons why the more well-known bloggers promote Bluehost.

Is that the only reason though? How about the quality of their service?

I’ll get to that in my personal experience with Bluehost soon.

One thing for sure, a lot of bloggers claimed that they have used Bluehost in the past and they had horrible experiences.

For e.g. they were unable to get support from the staff, there were long downtimes and so on.

On the other hand, there are lots of bloggers who are also in favor of Bluehost and have used them for years.

I can’t say for others, so I’ll just briefly share my experience so far with Bluehost (I still have 2 and a half years with them).

My experience with Bluehost

As stated above, I chose Bluehost initially because of reviews by top bloggers all over Google.

I can’t remember exactly and I’m a wee bit lazy to check.

The first thing I noticed was the cPanel for Bluehost.

I didn’t really get how this whole self-hosting thing works. I simply went here and there until I understood the basics.

Most of the functions won’t be used anyway.

How about their support staff?

I encountered problems when I migrated my site from WordPress.com to Bluehost myself. I ended up asking the Bluehost staff on migration issues.

It took me about five minutes to be able to communicate with a staff via live chat. Fortunately for me, it went well. The problems were solved and I moved on.

How about their downtime then? Is it really 99% uptime as advertised?

To be honest, I’ve experienced downtime several times before. They lasted perhaps less than a minute before the site went live again.

I don’t think it was a big issue for me as my blog is still small and has minimal readers. It would be a big issue if your blog has lots of traffic.

If I do get huge amounts of traffic one day, I’ll probably migrate to a different server and it may or may not be Bluehost.

Overall, I’m pretty satisfied with Bluehost so far. They have not posed any problems like the ones encountered by some of the other bloggers.

Bluehost used to be known as one of the best hosting providers among bloggers.

Unfortunately, ever since the sale of Bluehost to Endurance Group, it has apparently dropped in standard.

The top bloggers are still recommending Bluehost though, but I’m not sure if they’re personally using it.

As far as my experience with Bluehost goes, it is still serving me well. I hope it doesn’t change for the worse.

I would still recommend Bluehost to new bloggers as it’s cheap and they don’t need a powerful server for a low-traffic blog.

Thanks again for reading! Do subscribe to my blog for exclusive updates using the subscription form on the sidebar.