Yu-Gi-Oh!, a Japanese card battle game series, got in serious trouble when a handful of card became popular enough to rule the metagames with absolute authority. These cards had a certain power that could turn the battle game around.

For example, Black Luster Soldier (Envoy of the Beginning) and Chaos Emperor Dragon (Envoy of the End) cards have unmatched power to blow the monsters in the field of the enemy. Another card, Harpie’s Feather Duster has the ability to erase all the trap and spell of the opponent in a single move.

Besides that, the actual competitive terror for the Yu-Gi-Oh! was Yata- Garasu. Yata – Garasu ruled all kinds of existing decks being the major player in the “Yata-Lock” strategy.

Since such cards pose a serious threat, therefore a forbidden list was made that made sure these cards are banned in competitive contests. Besides that, there are still a good amount of powerful cards that are not included in the forbidden list.

They are dominant enough to wreak havoc in contests but there are conditions like allowing an only limited amount to use in the deck that can give a bit controlled advantage to the player possessing such cards.

Given below is the list of 8 of the best Yu-Gi-Oh! cards that should be legally banned in tournaments.

This card gained a lot of attention by appearing in Yu-Gi-Oh! manga where Joey Wheeler acquired it from Esper Roba in the Battle City Tournament. A different version of the card was shown in the manga because the original version in the cards does not contain it as a level seven creature.

It means that two sacrifices were necessary to make if the player wants it to summon onto the field. Later, in the Yu-Gi-Oh! card game and anime, the Jinzo card was reformed into level six creature.

Changing the Jinzo card to level six monster created a lot of rage in a competitive environment because almost every player started using this card to such extent that its expenditure became a permanent part in all kinds of the deck for years to come. In other words, it can be said that the two sacrifices requirement to use this card was quite justified.

The specialty of Jinzo is that its effect negates the effects of all the Trap cards in the field so that all the Trap cards in opponent’s deck will become useless until Jinzo is disposed of. Another important factor contributing to Jinzo’s authority in the competitive scenario is its 2400 ATK points strength.

It means it’s a big threat in a battleground where there are only handfuls of creatures belonging to six level that can surpass its strength.

Jinzo should be a part of Forbidden List by all means but till now it has avoided being present in the list with a limited and semi-limited status. 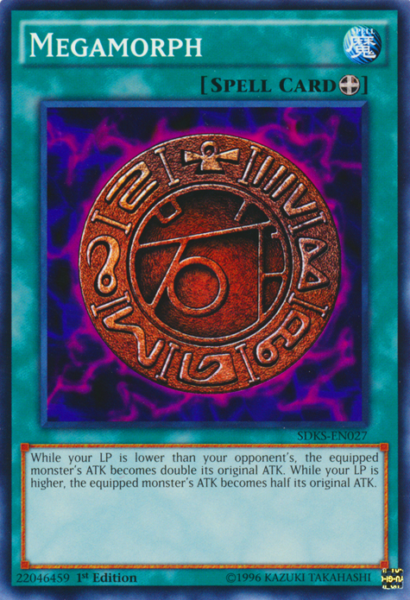 It was considered as one of the major players in Yu-Gi-Oh! competitive tournaments because of its presence in a Cyber- Stein combination. Cyber-Stein has the capability to call a Fusion Monster to the field at the cost of 5000 Life Points.

It means that one could call upon a creature with over 4000 ATK points in the field. After that arming the creature with Megamorph will automatically double its ATK score. This will eventually give the creature a total score of more than 8000 ATK points. If one had a clear chance of winning against the opponent, then the battle will be his or hers for sure.

Megamorph has never made to the forbidden list, although Cyber-Stein has been entering and exiting forbidden list quite a lot of times over the years. It is to be noted that Megamorph supreme power can be seen in other lethal combos as well where the specific combo like Evil HERO Infernal Gainer and Evil HERO Dark Gaia can end the match in one move.

The release of Raging Battle set made the way clear for Sea Serpent decks to enter the competitive tournaments by providing adequate support cards. The Tuner, named as Deep Sea Diva, calls another level 1- 3 Sea Serpent creature into the field. It is an integral part of many powerful combinations.

If Deep Sea Diva is paired with Atlantean Heavy Infantry, the combo will allow the one to make an extra Normal Summon or Set while being in the Main Phase. The combination of these creatures will open many options for summoning various diverse Sea Serpents from the deck.

These Sea Serpents can be used to perform certain high-level Xyz and Synchro Summons like bringing Mermail Abyssmegalo into the field.

By looking at the Yu-Gi-Oh! comic books and television or film animations, one can clearly get the idea that Foolish Burial is very impressive because of its potential combos. If some monster from the deck needs to be summoned then all one needs is a card that has the power to bring back the creature to the field from the Graveyard and Foolish Burial.

With the arrival of new creatures in the competitive field that benefitted from their presence in Graveyard, Foolish Burial usage has finally been restricted. However, since this card has no other drawbacks or costs, therefore, banning it seems like an appropriate step rather than just restricting its use.

Many Yu-Gi-Oh! cards allowed the free of cost summoning of creatures from the Graveyard. This kind of cards made exit from the competitive scenario because of their overpowered nature.

For example, cards like Monster reborn and Premature Burial gives to the ability to summon a creature from Graveyard free of cost. If it is combined with Free Burial card, this combo will allow bringing any card to the field.

Soul Charge is also used to call upon some creature from the Graveyard but it has a cost. One has to pay 1000 Life Points per creature for summoning various exterminated monsters to the field. The catch is that one cannot pursue a Battle Phase during the same turn as of Soul Charge but this is a small setback in front of calling back dangerous creatures on the field.

This single card can definitely turn the table in one’s favor with little or no strategy.

Most of the competitive card players will try their best to use the minimum number of required cards in the deck.

The reason behind this is the fact that many of the best cards are the most expensive ones. Thus, the players try their best to draw the cards that they need.

Gold Sarcophagus, an interesting addition to Exodia deck, allows the player to draw any card from their deck with one condition i.e. they will get it after waiting for two turns. It is of excellent usage in those formats where it is not restricted because one can discover many of the pieces in a few turns.

Cards like D.D Scout Plane have an extra advantage over Gold Sarcophagus due to the fact that they can bring the creature into the field without putting the one in the position of waiting for two turns.

There are certain powerful cards in Yu-Gi-Oh! cards like Pot of Greed that will give a player two free cards in exchange for one card. In a competitive environment, all the players will be willing to ban such influential cards because in such scenarios the dominance of a card is established by the fact that how many cards it costs to equal its effects. That is the reason why Pot of Greed is banned from gaming contests.

Magic Cylinder works on the same lines as of Pot of Greed. It can defy an opponent attack along with wrecking damage right back at the enemy. In other words, it means that a single Trap card if used at the right moment can make it quite possible to overthrow the enemy even if the odds are against you on the field.

Due to this powerful play act usage of Magic Cylinder is restricted but banning it completely would be a far better decision.

This card is created to balance out an older card known as Solemn Judgement. Solemn Judgement was considered as one of the most powerful cards in Yu-Gi-Oh! game history.

It gave one the power of negating almost any card even if it is played for the cost of half of one’s Life Points. This is the reason why this card made its way in the forbidden list.

By using Solemn Warning, a player can have the advantage of preventing the summoning of any creature at the cost of 2000 Life Points. Normal Summon/Set and Special Summons, it prevents all of them at the same cost.

This power of prevention makes this card highly effective against almost all strategies in the game that usually relies on famous Special Summons and Xyz, Synchro, and Fusion Summons. Therefore it is about time that competitive tournaments should seriously think about putting a ban on Solemn Warning for good.