Telltale Games is an American video game developer and publisher, first emerged in the industry by launching a stylish poker game simulator, Telltale Texas Hold’em. No one expected that Telltale Games would be the icon of modern adventure games.

Adventure Games are games where the player assumes the role of the protagonist in a story driven by exploration and puzzle-solving. Telltale Games established their own brand of point and click adventure games and made their point to heavily emphasize on the player’s actions in affecting the game story and progression of the plot.

It then became an iconic selling point for most of their games. Now, we will be looking at some of the best Telltale games, ranked from average to amazing. 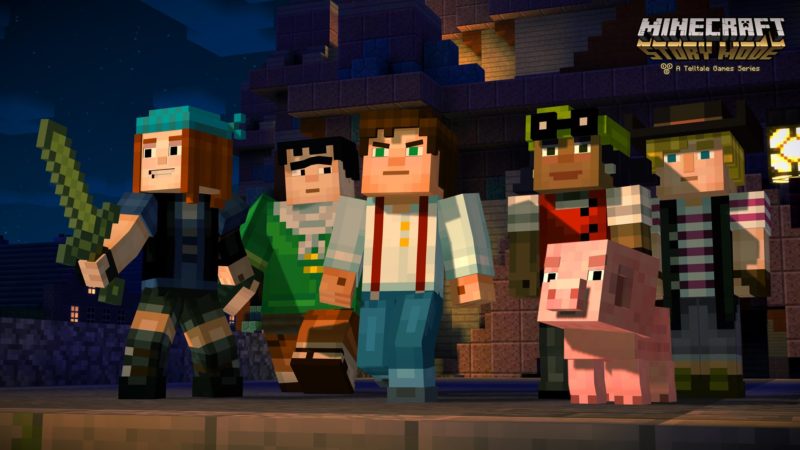 Starting off the list is Telltale Games’ take on the lovable sandbox game, Minecraft. The game came out this 2015, in an attempt to ride the hype train on the popular low-graphics game.

Telltale Game’s tried to put their own brand of adventure and story to the vast world of Minecraft, which did not quite work out. The game currently spans two seasons, with the first season having eight episodes and the second having five episodes.

The game features a customizable protagonist, Jesse, with a number of choices including gender and skin tone. The game supports crafting and building, two well-known mechanics to Minecraft, with combat and other action sequences carried out through both quick time events and more arcade-like controls.

Minecraft: Story Mode is oriented to be family friendly and not for mature audiences which sadly affected the quality of the game. Minecraft: Story Mode gave a relatively simple story, compared to even the earliest works of Telltale Games, involving characters with shallow personalities.

This game is not something that one should go out of their way to buy. Just leave this game to the kids.

Jurassic Park took the masses by storm; revered as one of the most iconic movie franchises ever and a classic for the avid and casual moviegoers.

First released in 1993, and after almost 18 years, Telltale Games decided to launch their own take of the memorable movie. Spanning four episodes, the game tried its best to carry the same excitement and story that the original film had – it really tried but didn’t quite get there.

The game is a follow-up to the first movie’s story: a group is sent to retrieve the dinosaur embryos, a character in the movie tragically lost, and everything went awry.

This game strayed away from the standard Telltale Game storytelling and dabbled with the idea of controlling multiple characters with different perspectives to progress the game.

While this sounds exciting and fantastic, the execution of the idea is far from flawless; the multiple characters swapping made the game disorienting and difficult to take in. The quick switching of perspectives leaves the player little to no time to be invested in the character and is just left with a general sense of their character tropes.

The game itself did not quite portray the same feel and excitement presented by the film. Having a little girl outrun a dinosaur that supposedly could outrun a jeep just completely belittles the whole situation.

A number of people wished that the Jurassic Game was as good as the movie but it didn’t evolve enough for the task. 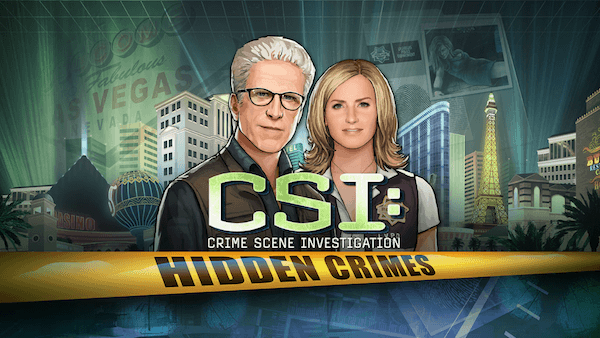 The CSI Games is a series of Telltale Game’s rendition of the television forensics crime drama. Telltale Games released four CSI games but we’re going to lump them all together in one for the list since they all share the same game mechanics and general feel.

The game features a variety of mini-games involving getting clues and evidence through various forensic techniques as seen in the show; ranging from simple photographs of the scene to special sprays that illuminate blood splatter.

These pieces of evidence can then be processed in a lab through various mini-games which can be entertaining or even challenging the first time around but gets old and tiresome after some time.

The game tried to portray the characters from the show as best as it can with varying degrees of success. Some of the characters do appear to be on point as they appeared on the show but sometimes the game’s hyper-realistic graphics just made it uncanny and uncomfortable to look at.

On the other hand, the “cases” handled in the game are easy and plain, high in contrast to the cases handled on the show itself.

This game can’t be considered as a crime to video games but unless you are a CSI fan yourself, it’s not a game that one should go out for. 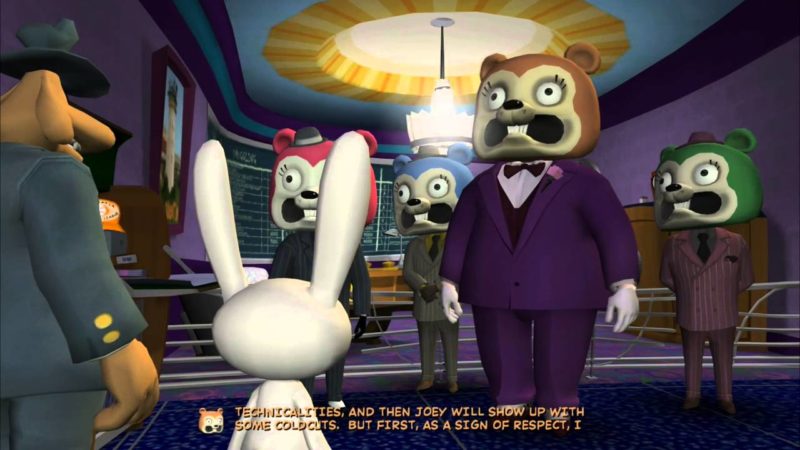 Sam and Max mark the period of adapting comic book characters into their adventure games back in 1993. The lovable duo came back to the screens this 2006 in Sam & Max Save The World.

Starring Sam, the canine detective with a comically baggy outfit, along with his partner, the hyperkinetic rabbity-thing Max, the two set off in a hilarious adventure that is a rarity in the gaming industry.

The game’s selling point is not its retro graphics or having a super complicated story but it’s really just the pair in their silliness. With fairly simple dialogues and a straightforward point and click progression, Sam and Max Save the World spans six episodes with their own story arcs unrelated to each other; offering satisfying story bursts of entertainment that do not wear down on the player.

Ranging from encounters with washed up former child-stars, paranoid shop assistants and giant robotic presidents of the United States, Sam and Max will take you to see wackiness you’ll never expect.

Of course, as it’s a fairly old game, it has a number of issues. Aside from many technical issues caused by porting the game to a new platform, the game itself is riddled with gimmicky puzzles that do not quite fit with the general audiences.

Despite the game’s age and difficulties, Sam and Max Save The World is decent enough for college students. 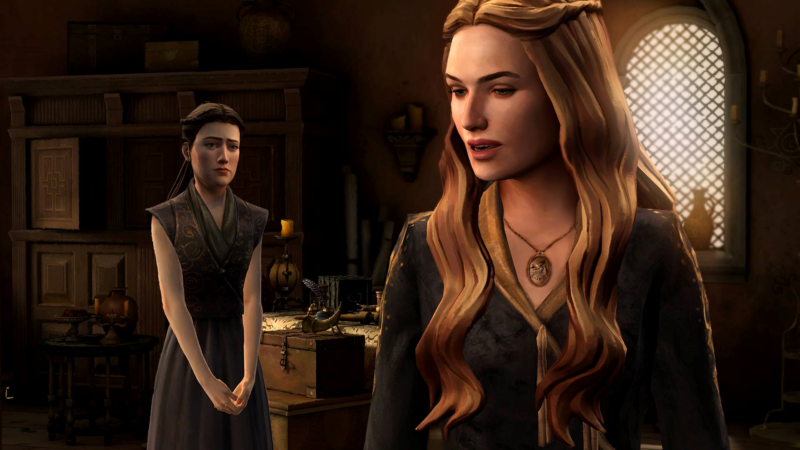 Game of Thrones of Telltale Games is a six-episode adventure game based on the television adaptation of George R. R. Martin’s “A Song of Ice and Fire” novels. The game takes place after the Red Wedding, focusing on House Forrester, one of the noble houses under the Stark banner.

This game offered an original story set in the Game of Thrones universe and as an added bonus, the story was written with the consultation from Martin’s personal assistant; the cast from the TV show also decided to chip in and play their characters.

As members of the House Forrester, the player can be an essential part of the story, even encountering heavy interactions that decide who gets to live or not. It’s an experience that just lets you love a character that you did not know even existed.

However, the game’s main selling point – being part of Martin’s fantasy world – is also its flaw. The game relies on existing knowledge of the Game of Thrones universe which is weird for a game that supposedly tells you everything about the story. And even then, the plot is mild compared to the Television show and may have disappointed a few fans.

Still, even with dated graphics, Game of Thrones by Telltale Games could hold its own in a gauntlet of adventure games.

6. The Wolf Among Us 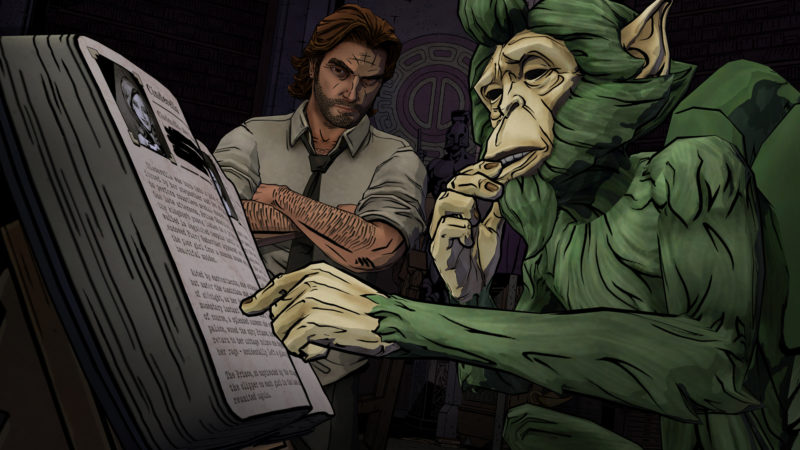 The Wolf Among Us is an adventure game based on the Fables comic books by Bill Willingham. The story follows into the troubled world of Bigby Wolf, the sheriff of Fabletown, famous for his past title: the Big Bad Wolf. The game is dark even by the standards shown by the previous game mentioned, Game of Thrones.

Set in late 80’s New York, sheriff Bigby is tasked with solving a brutal murder in Fabletown, a fictional community of “Fables” who have escaped to the real world as outcasts after the fantasy world they used to inhabit has been taking over by evil.

The game is absolutely superb in its writing, making players fall in love with the characters and delivering the story clear even to players who have never heard of the Fables comics.

With a dark atmosphere and dire situation, the game is littered with dialogue choices that have deep consequences for the whole story. Of course, the game not without “baddies” on its entirety.

Numerous quick time events just don’t give the player the opportunity to live in Fabletown; getting whisked from one place to another without even a moment’s notice. The game could do less with the button mashing too.

Overall, The Wolf Among Us is one of the best Telltale games that truly gives the player meaningful choices. 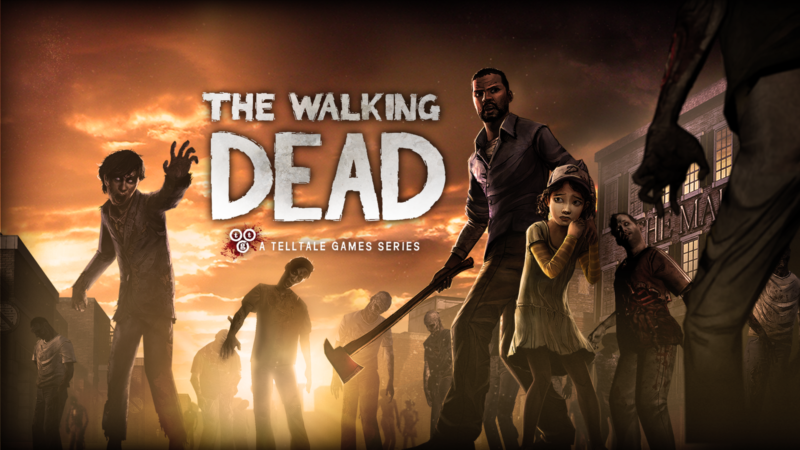 Based on The Walking Dead comic series by Robert Kirkman, the game follows the story of Lee Everett, a former university professor, and convicted murderer, as he is freed on his way to prison by a lucky, or unlucky, zombie outbreak.

Lee then meets a young girl named Clementine, who he takes under his care and the two set seeking a sanctuary and Clem’s parents, meeting with other survivors along the way.

Unlike The Wolf Among Us, The Walking Dead is fairly simple in its story. The script is not particularly extravagant but it works for the situation the game calls for. Characters are very straightforward with simple dialogues and solid logic that brings their clear thoughts to light.

Featuring plenty of emotional moments and tense situations, the game hangs on conflicts, drama, mystery, suspense, and surprise. With multiple story paths, the game will take you through various atmospheres that just makes the characters more memorable.

In contrast to this, the facial expressions of the characters can be quite overly dramatic which can affect how you take the situation being presented; imagine concerning over a death of a former survivor then presented with an overly reactive, borderline comedic, face of Lee; you would be hard-pressed to take the scene seriously.

Nevertheless, despite the simplistic, uninspired nature of The Walking Dead coupled with quirky animations, the game is still one of the best that just lived out the image of Telltale Games.

8. Tales from the Borderlands

Set in a sci-fi world, the player takes control of two protagonists: Hyperion employee, Rhys and con artist, Fiona. Unlike the chaotic multiple perspectives of Jurassic Park The Game, the story is carefully told by combining the stories of Rhys and Fiona, who are relating their differing points of view to an unseen stranger.

In keeping with the real Borderlands, the game is primarily a comedy but the characters are fleshed out enough for them to tackle a more serious tone. The game also features numerous Quick Time Events that emulate the high paced shooting gameplay of Borderlands.

While the game story is not as complex or overarching as the previously listed games, but the player’s choices can affect who will be present to offer the players help for the ending.

Tales from The Borderlands is truly a masterpiece of Telltale Games. It is a surprise that every player should experience. Carefully balancing comedy and seriousness with a very jarring ending, everyone should give this game a shot.

We have listed numerous Telltale games from average to amazing, but what do you think of the list?

What’s your favorite game from the Telltale series? Do leave your comments below.