Theatrics and Espionage is a main quest under Assassin’s Creed Odyssey’s DLC.

Your task is to find out more about the Tempest’s secret weapon and meet her engineer.

Here’s a walkthrough of Theatrics and Espionage in AC Odyssey. 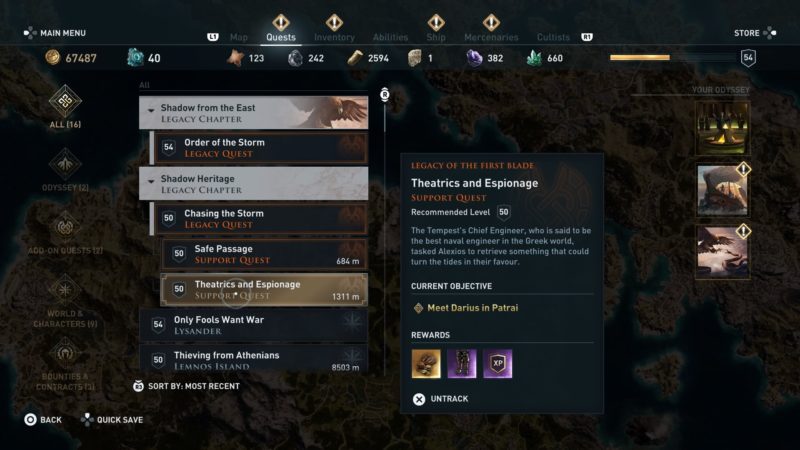 To begin the quest, meet Darius in Patrai. His exact location is shown in the map below, marked as the quest symbol. 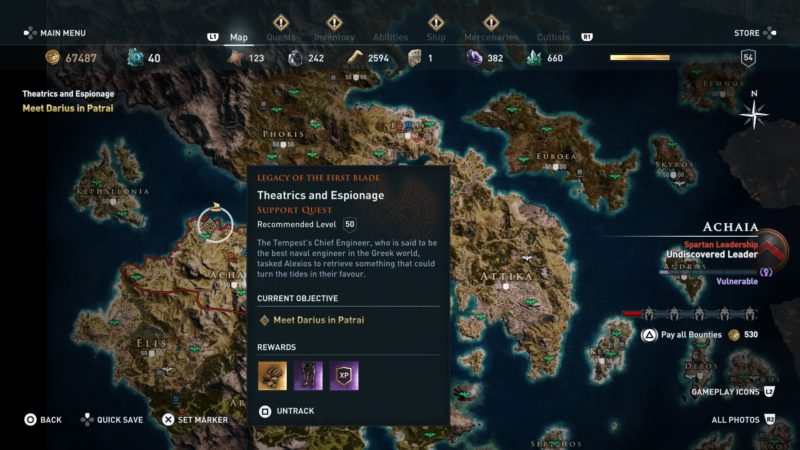 He will be waiting inside the structure of a ship. Talk to him. 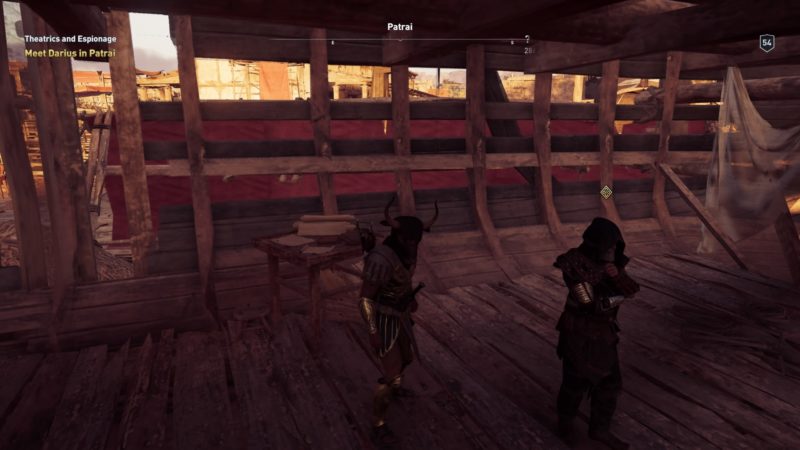 He will then tell you the code word. You need it to find the chief engineer who used to work with the Tempest. 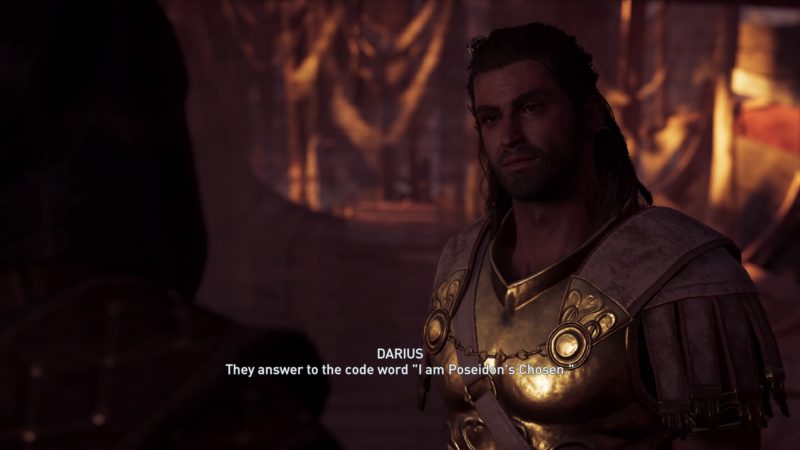 Get to the amphitheater. It’s just a short walk away. 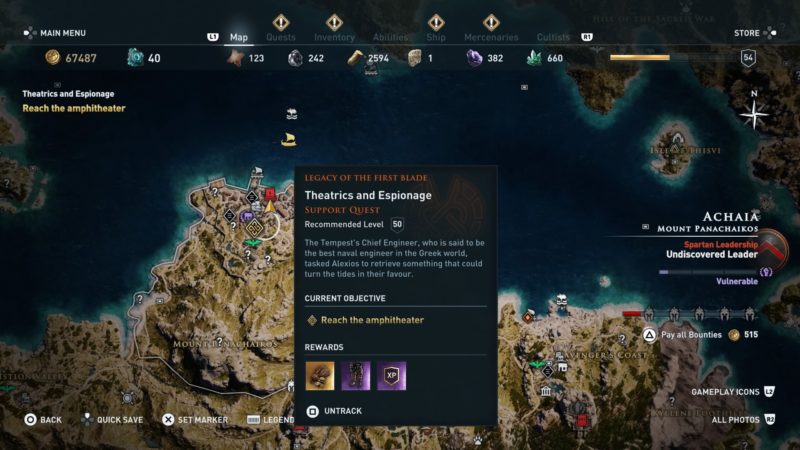 Now, you need to talk to some people to find out who the chief engineer is. 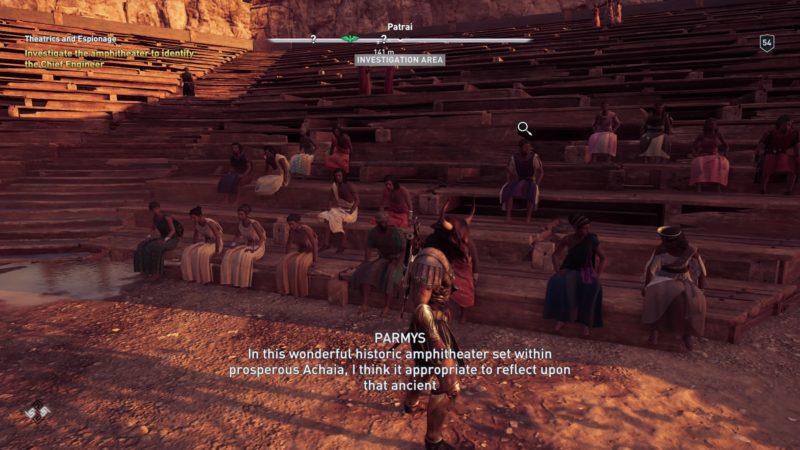 Talk to this guy in the image below, as he is the chief. 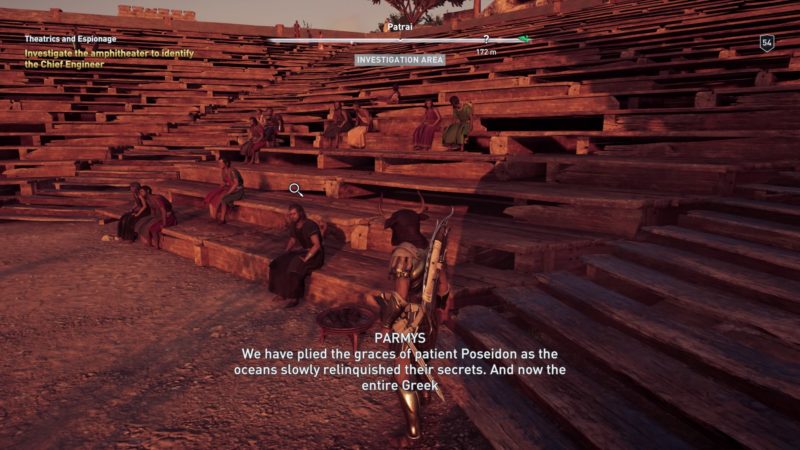 Find and acquire the blueprints

The chief engineer then tells you that you have to find the blueprints for the Tempest’s weapon. You can steal it from the fleet commander. 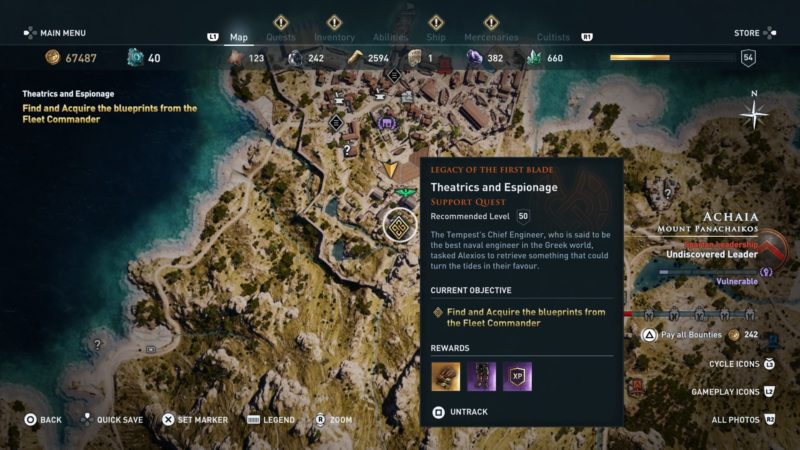 You should see some guards in the place as the commander is in the Temple of Artemis Laphria. 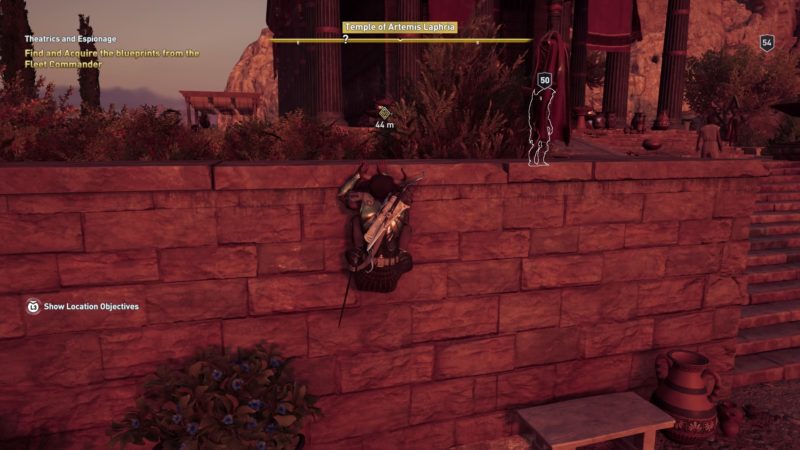 He is inside the building. You probably can’t kill him without being unnoticed. Maybe the Ghost of Artemis skill is good for this. 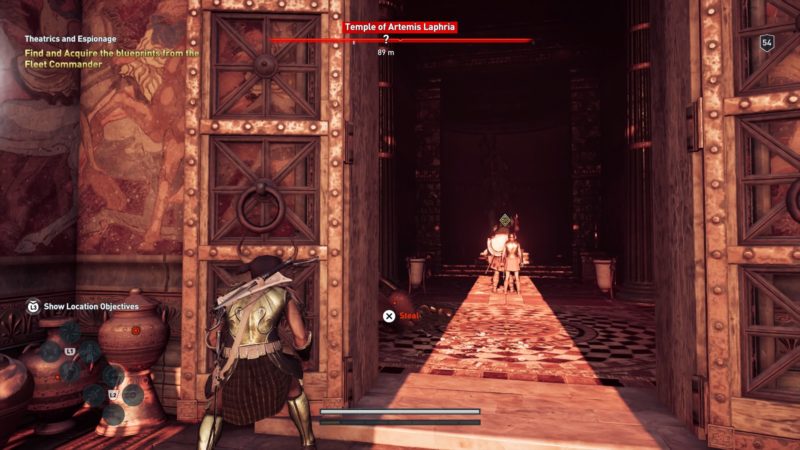 After killing him, loot the blueprints and get back to the engineer. 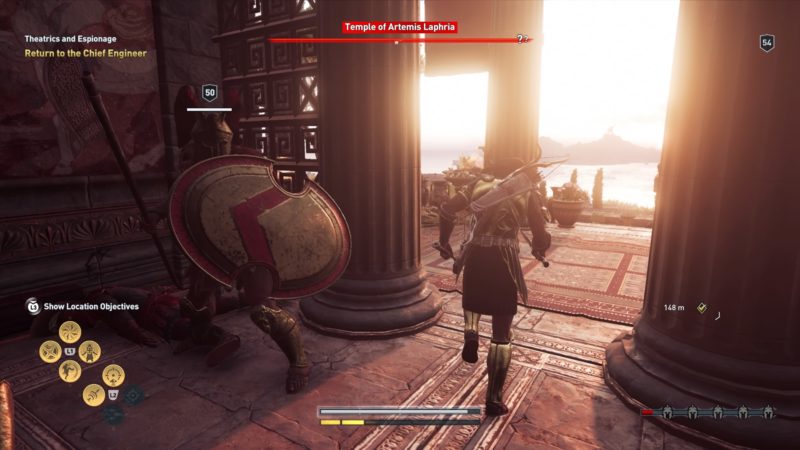 Return to the chief engineer

The engineer is at the amphitheater earlier. 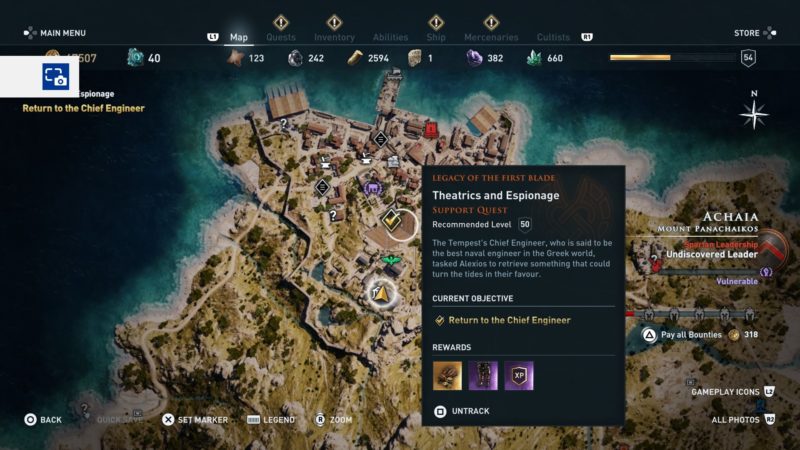 As you get there, you’ll notice that he’s dead. 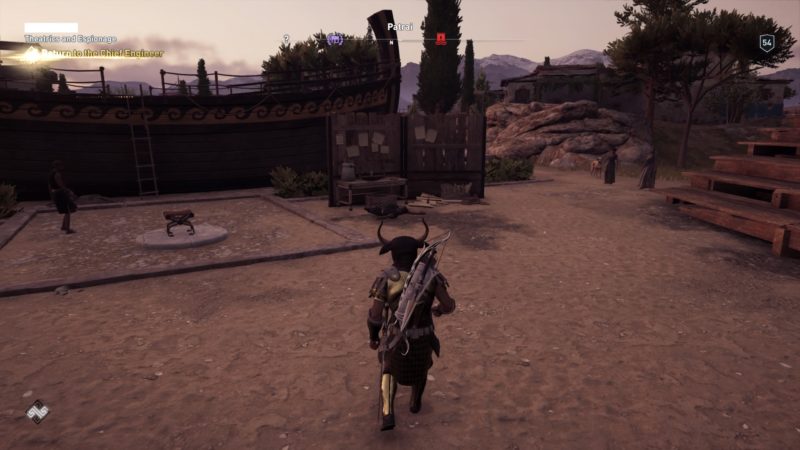 During the cutscene, you will be introduced to Megakreon who is a member of the Order.

Kill Megakreon and his henchmen

Defeat Megakreon and his guards. 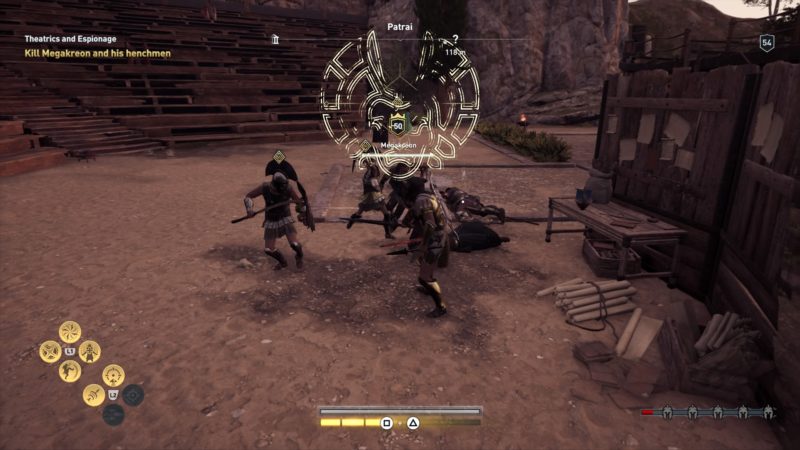 It isn’t too difficult of a fight. After beating him, you should get a new engraving and a weapon. 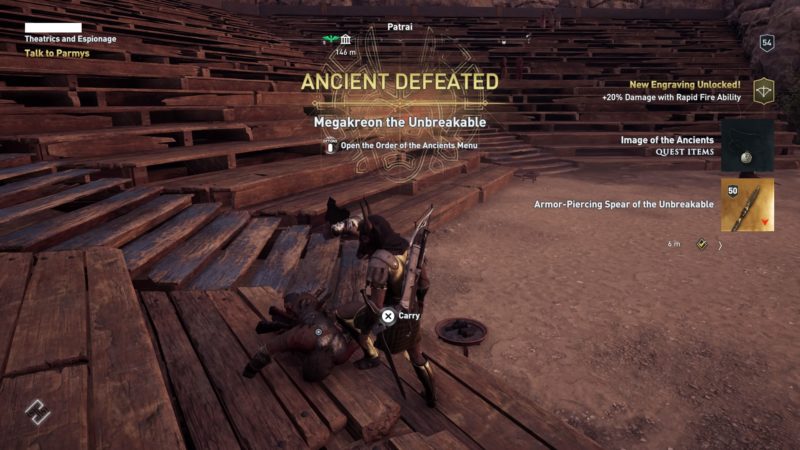 She is the wife of the engineer. Talk to her to proceed. 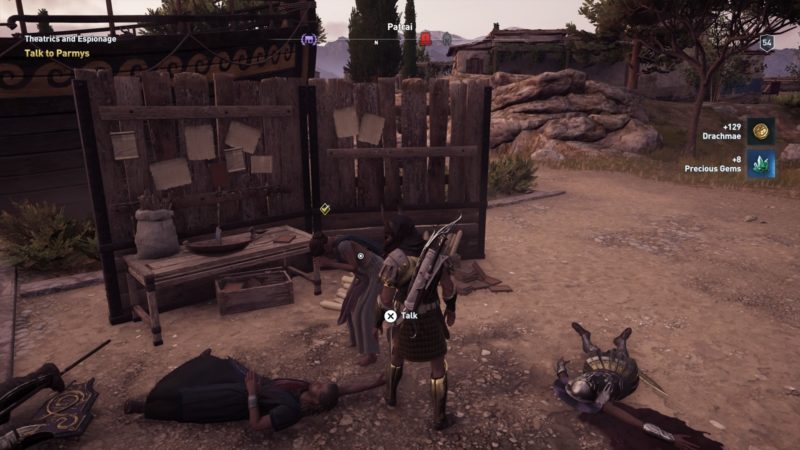 She will then agree to build the flamethrower on your ship if you manage to get the requisite items.

It’s a way to avenge her husband’s death.

The quest completes here and you will get drachmae plus an equipment. 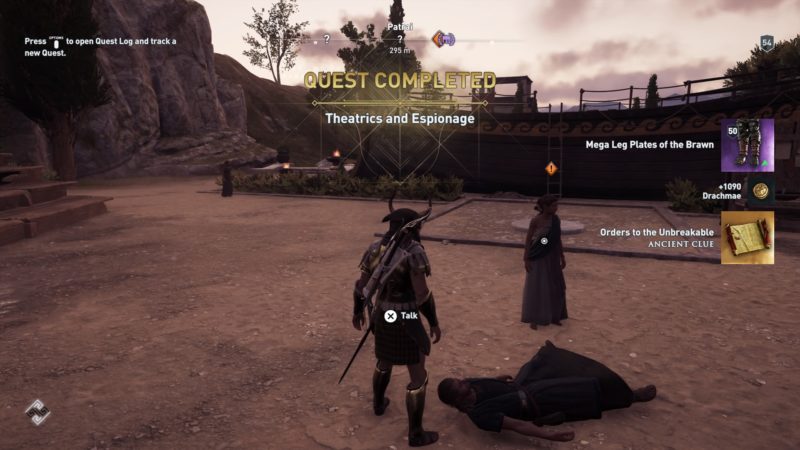