A Life For A Life is a quest in the Atlantis DLC of Assassin’s Creed Odyssey.

Your task is to choose to kill either Leonidas for Persephone or hand Kyros to her.

Here’s a walkthrough of A Life For A Life in AC Odyssey. 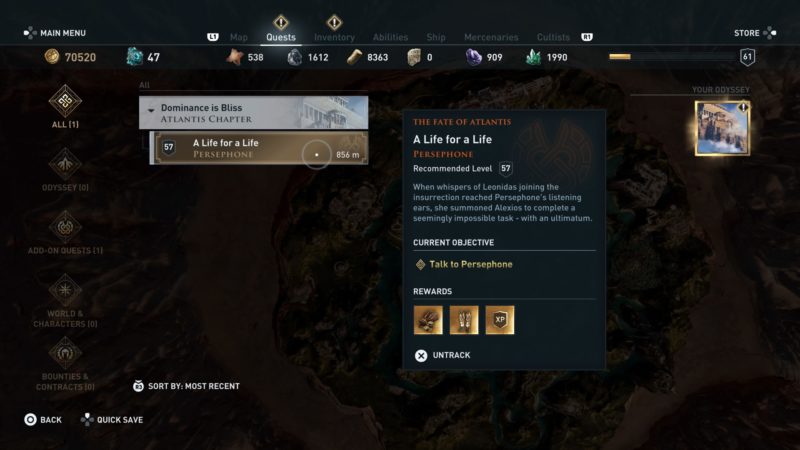 This quest is recommended for level 57 and above, but it differs according to your own level.

To begin the quest, talk to Persephone who is at Deukalion’s Heritage. The exact location is shown in the map below. 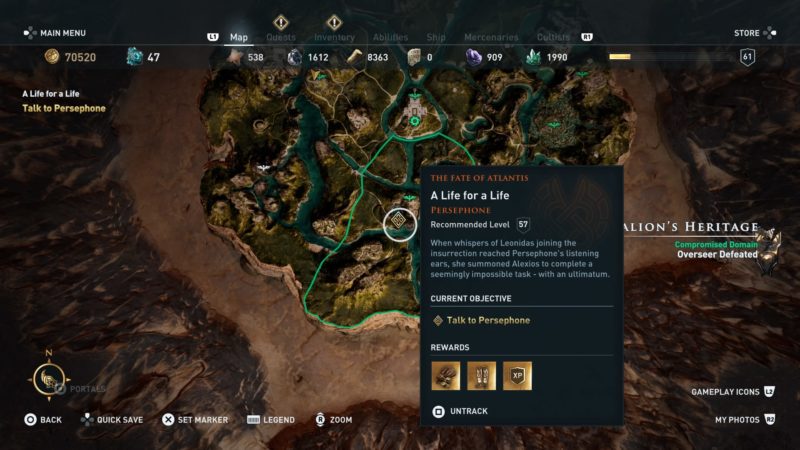 When you get there, you should see her with two Isu guards. Approach her and a cutscene will load. 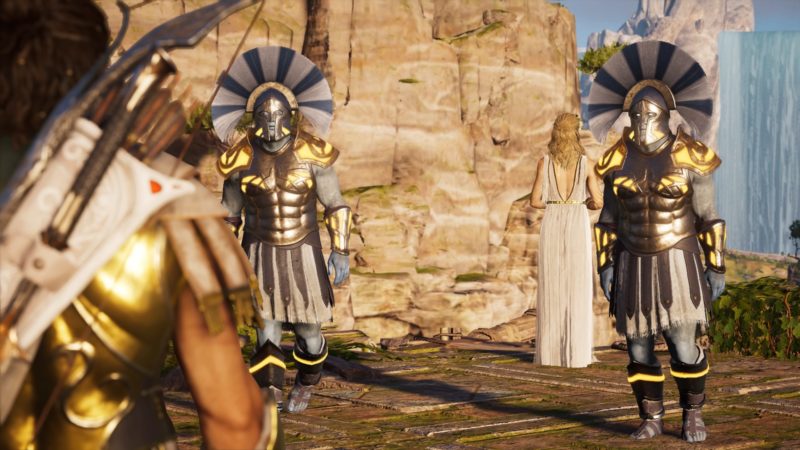 She will ask you to kill Leonidas, whom she heard is fighting for the rebels.

I chose the option “He’s my grandfather”. 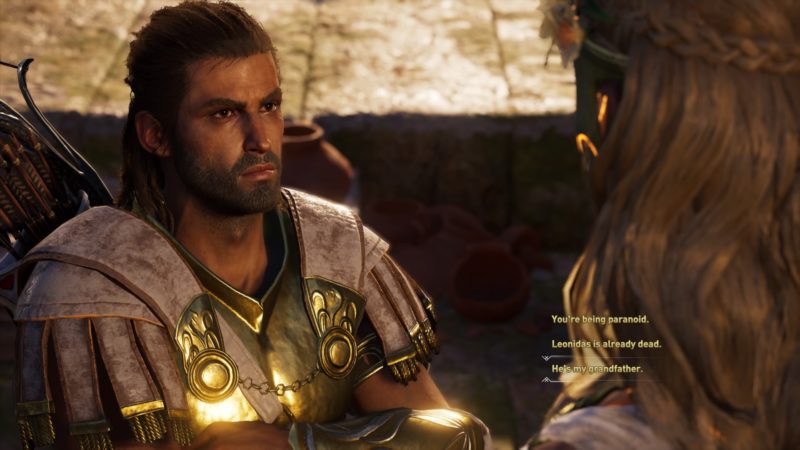 Next, Persephone will offer you a deal. She said she can bring back Phoibe or Brasidas if you bring her Leonidas’ dead body. 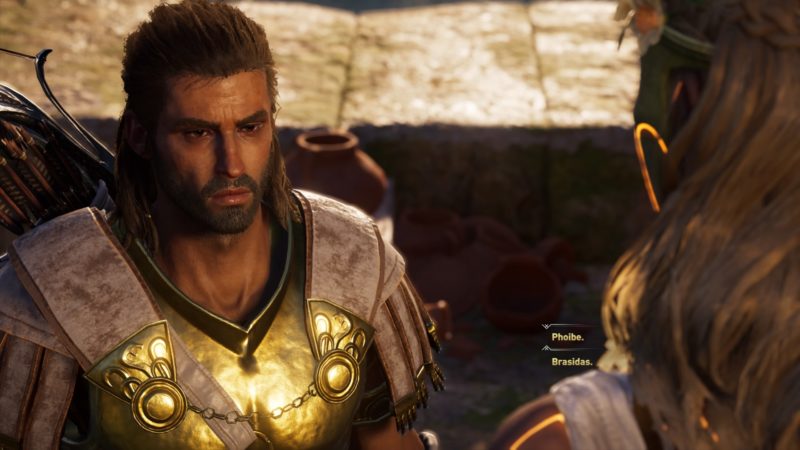 Now, go and find Leonidas at the exact location shown in the map below. 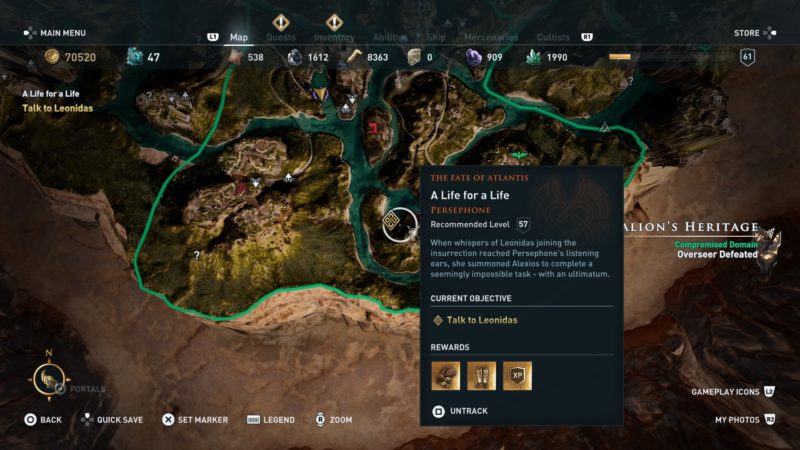 You will see him near the river. Talk to him. 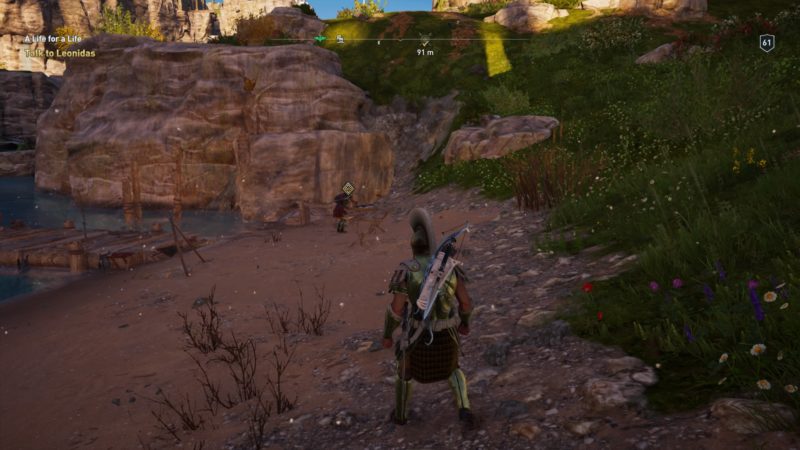 During the conversation, you can choose to kill him or mention that Persephone wants him dead.

I chose to spare Leonidas. 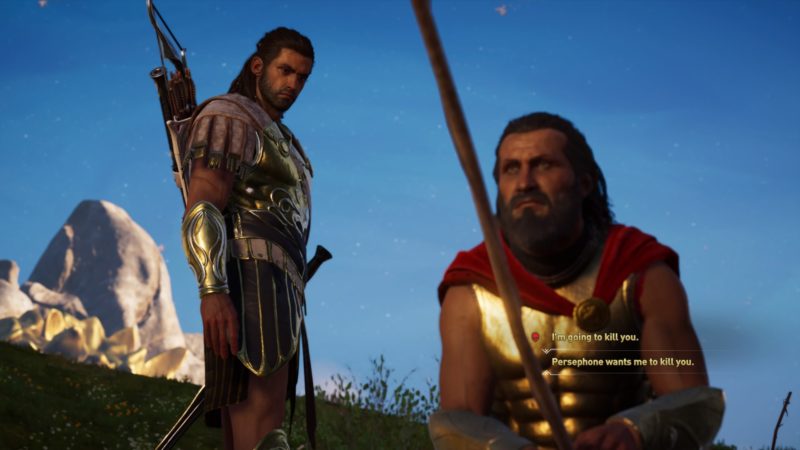 If you had followed my choice, he will then advise you to bring Kyros to Persephone, since he’s a traitor.

Find and bring Kyros to Persephone

Now, get to Minos’ Faith, Sarpedon’s Refuge. The exact location is shown below. 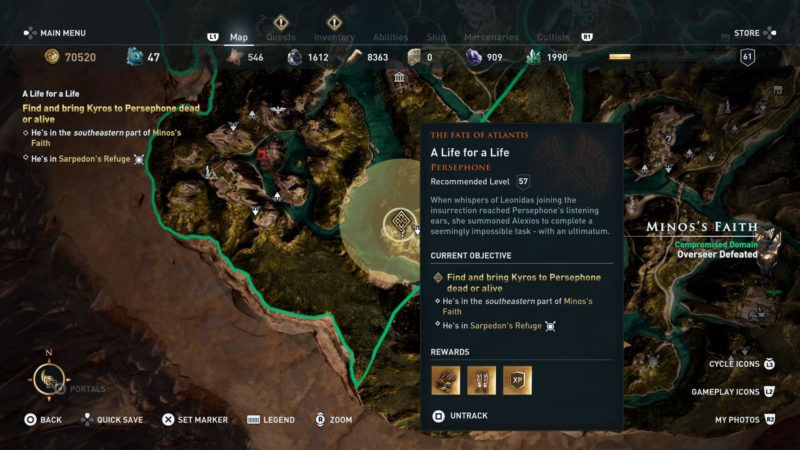 When you get there, use a teleporter to go up. 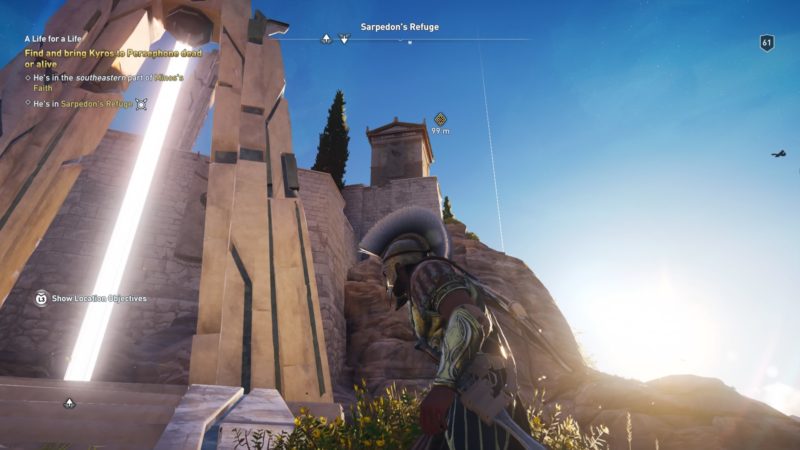 You should then arrive at the outpost. There will be guards all over. 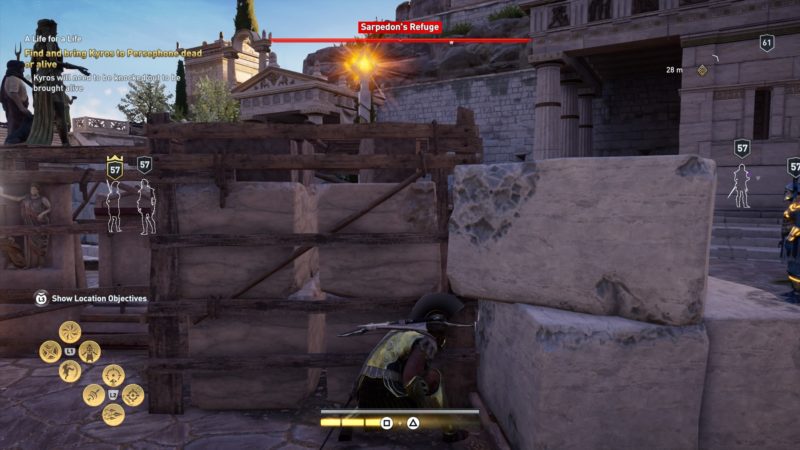 To bring Kyros alive, you’ll have to knock him down. I definitely failed in that part.

He spotted me, so I just fought with him as usual. 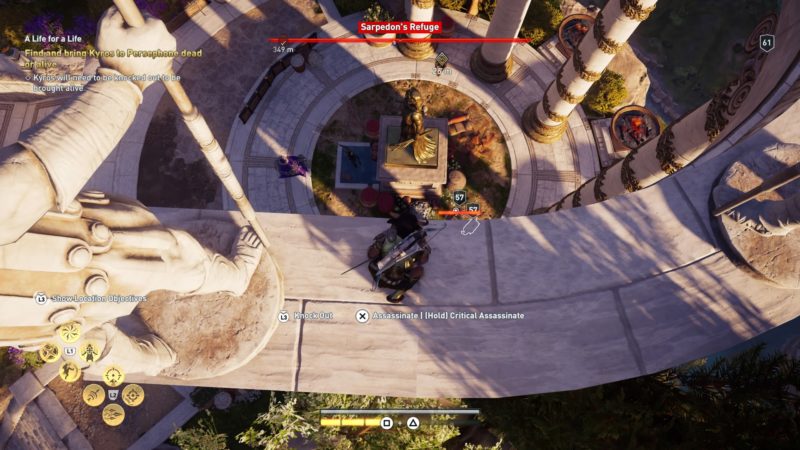 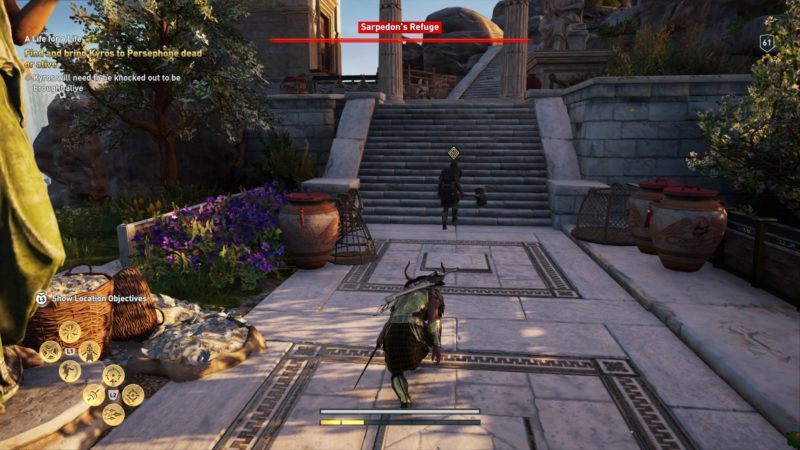 Kyros is actually pretty strong. It may take awhile to defeat him.

Bring him back to Persephone

After defeating him or knocking him out, carry his body and bring him to the location shown below. 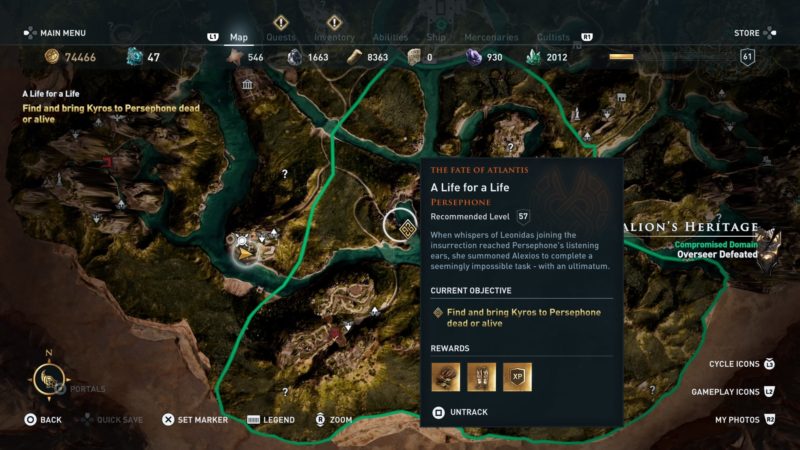 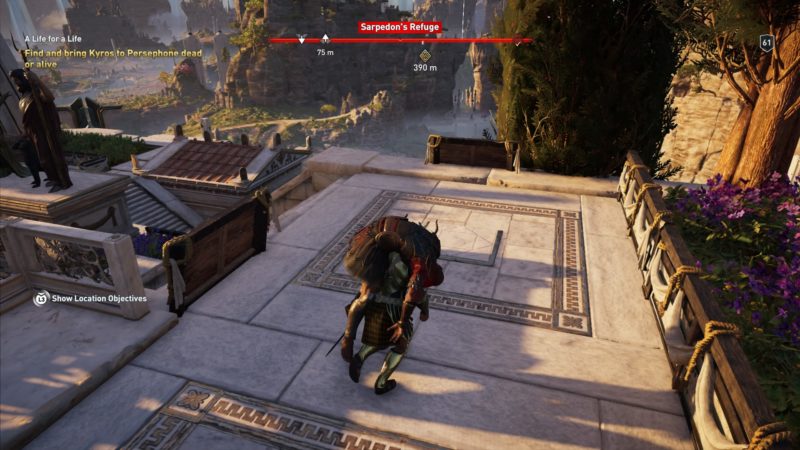 Persephone is waiting at the same spot. 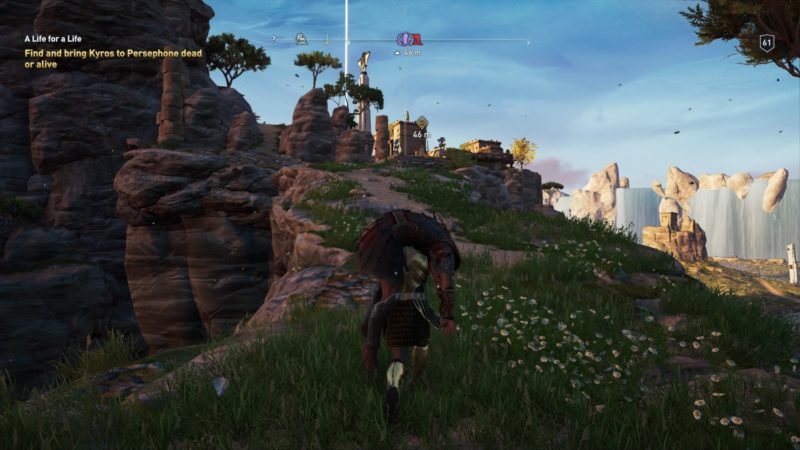 Approach her and a cutscene will load. She won’t honor the deal as you didn’t kill Leonidas, but she will allow you to stay in Elysium. 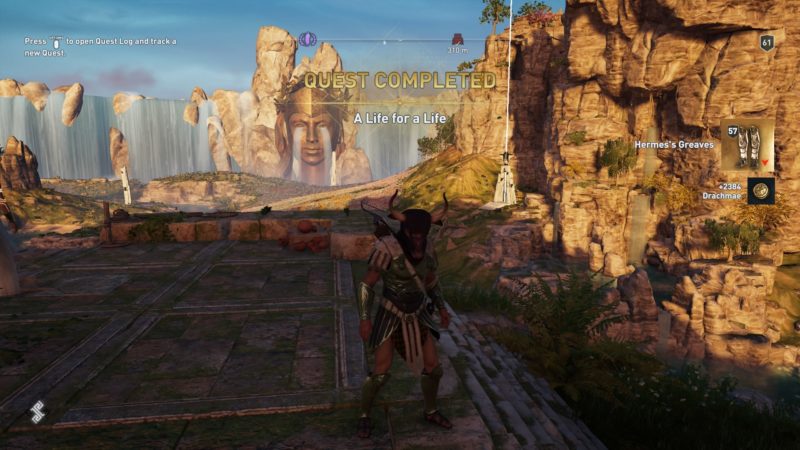 The quest completes here, and you’ll get Hermes’ Greaves plus some drachmae.