Ricky Gervais is not only known for being savage as a host on the Golden Globes Awards, but also as one of the top comedians. He is also well known for acting, directing and even producing shows.

As of 2020, Ricky Gervais is estimated to have a net worth of $130 million, from various sources.

Ricky Dene Gervais was born in Reading (Berkshire) on the 25th of June, 1961. Together with his brothers Larry and Robert, and his Marsha, he was raised in Berkshire as well.

His dad was originally from Ontario but emigrated to the UK during the 2nd World War.

Ricky Gervais went to Whitley Park Infants and Junior Schools for his early education, and later moved to Ashmead Comprehensive School for his secondary education.

He eventually ended up in UCL back in 1980, where he initially took biology but later changed to philosophy.

Ricky met his wife Jane Fallon back at the UCL.

As far as career goes, Ricky has had multiple different career paths. He started out in the music industry first, back in 1983. He and his college friend created a pop duo Seona Dancing and was eventually signed by London Records.

He hasn’t been that active in the music industry ever since, with just a few involvements here and there.

Ricky also delved into both radio and podcasts. He released several podcasts, the most popular being The Ricky Gervais Show, which also featured Karl Pilkington and Merchant.

Ricky is also quite active in the television industry and his focus was on comedy. He had a number of popular shows including The Ricky Gervais Show, Life’s Too Short, Extras, Derek and After Life.

That being said, his most well known TV series was probably The Office, where he won a Golden Globe Award for both Best Television Series (Musical or Comedy) and Best Actor for the same category.

Ricky Gervais is also extremely talented in the field of comedy. His stand-up career began in the late 1990s and had massive success ever since. 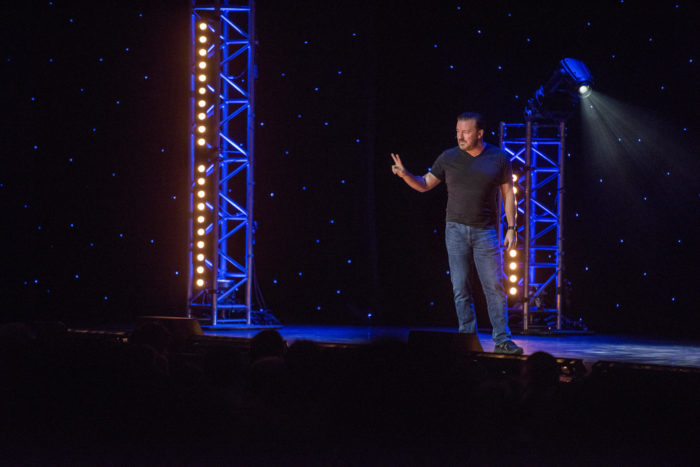 Ricky is also known for his involvement in the Golden Globe Awards. He has hosted the show many times and each time, being savage as always with the celebrities.

Ricky Gervais has had many highlights in his career. Here are just a few of them.

There are plenty of interesting facts on Ricky Gervais. Here are some of them.

With all of his achievements, it’s no surprise that Ricky’s net worth is estimated at $130 million today.