Episode 6 of Forest of Secrets 2 just released hours ago and we can’t wait for the next episode already.

Here’s a preview of episode 7 for Forest of Secrets 2 (Stranger 2). 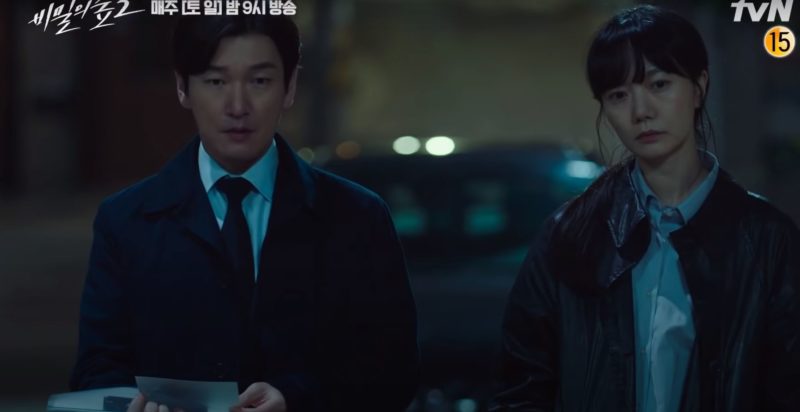 Episode 6 of Stranger 2 had a lot to do with Si-mok investigating the cover-up by Tae-ha and Assemblyman Nam.

Meanwhile, Yeon-jae begins her scheme to counter Sung-jae’s intention of disposing her as the chairwoman of Hanjo Group.

Episode 6 ended with Dong-jae having found to have disappeared, leaving his car and some blood stains.

The preview of episode 7 can be watched from the end of episode 6 or from YouTube (video below).

Most of the preview is on Dong-jae’s disappearance, with both Tae-ha and Chief Choi wondering what had happened to Dong-jae or why he was kidnapped.

Si-mok is also seen going around looking for clues on what had happened to Dong-jae. He even interrogates his boss Tae-ha.

At the crime scene, Si-mok meets Yeo-jin as they attempt to figure out who took Dong-jae.

Seo Dong-jae’s disappearance seems to have something to do with Yeon-jae, or at least that’s what the director wants us to believe.

Yeon-jae saw a message by Dong-jae right at the end of the episode and she hinted at getting rid of him as well.

Episode 6 also shows how cunning Yeon-jae can be and how it’s only the beginning of her plan to maintain control of Hanjo Group.

In the preview of episode 7, we see both Si-mok and Yeo-jin trying to figure out why Dong-jae was taken.

Hopefully we’ll see more of the two working together like in the previous season, as this season has put them at opposing sides.

Flower Of Evil Episode 11 Preview – Who Is The Accomplice?