Episode 12 of Flower of Evil has finally been shown after a week of delay and it’s been pretty exciting.

It’s probably one of the best dramas of this year so far with all the suspense and twists.

Here’s a preview of episode 13 of Flower of Evil.

Episode 12 ended with Hee-sung killing their maid after the latter blackmailed Mi-ja and asked for money.

He revealed that he could actually walk and ended up strangling the maid, with his father Man-woo finding out later.

Hyun-soo then calls Man-woo saying he wants to use the summer home, and the latter calls Sang-cheol to get rid off Hyun-soo at the said home.

While Man-woo and Hee-sung were trying to dispose off the body from their house, Hyun-soo showed up with Ji-won at their front door instead. This means Hyun-soo lied to Man-woo about going to the summer home.

The episode ends as the front door opens.

In episode 13, we can see that Hyun-soo and Ji-won are having a conversation with Man-woo and his wife Mi-ja at Baek’s family house.

Mi-ja asked how much (probably Ji-won) actually knows about the situation, with Ji-won counter-asking how much they’re hiding.

A power outage happens and Hee-sung is seen walking into the house. Hee-sung is also seen saying he wants to prepare a ‘gift’ for Hyun-soo.

Hyun-soo seems to have gotten a threatening call as well, and Hae-soo may be harmed from this.

In the preview, Hyun-soo might also set up a meeting with Sang-cheol. 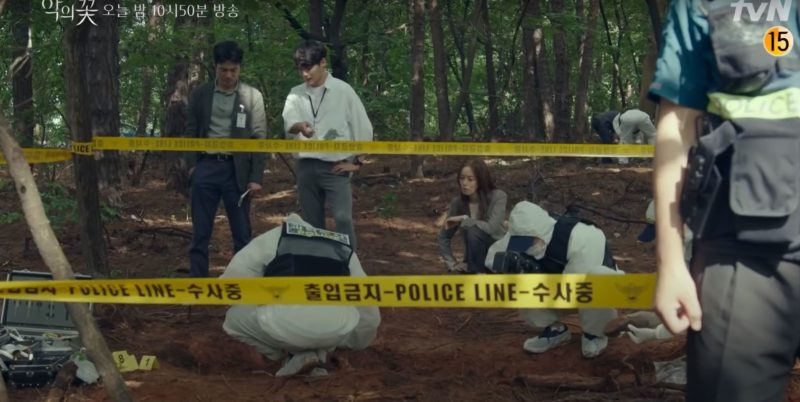 The police force also finds a body dumped in the woods.

Lastly, Hyun-soo is seen saying ‘he didn’t do it’.

Ji-won and Hyun-soo’s visit might end early because of the power outage and Hee-sung will probably step in after as he can’t be seen.

Hee-sung might also be planning to push the blame to Hyun-soo, possibly on the maid’s death. As Hyun-soo is seen defending himself at the end of the preview, the evidence (or lack of) probably points to Hyun-soo as he gets set up.

Hee-sung might also go after Hae-soo since he wanted to meet her in the past.